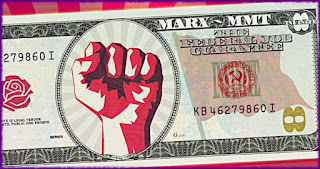 The Progressive Uber-Left is currently pushing MMT or Modern Monetary Theory which basically says budget deficits don’t matter and are actually beneficial to the economy.

Therefore, elect them so they can run massive annual deficits and pay for Medicare for All among other centralized government programs they would control from Washington, DC and never worry about balancing budgets or paying down our national debt.

MMT is another name for an early 20th century concept, chartalism, which viewed money as having value solely because the government entity that created it deemed it as having value, not as a spontaneous means of trade to replace basic barter between individuals. It fits the socialist view of governance that all power derives from bureaucrats running government who bestow benefits among the people since they know best how to spend your money, not you.

Since all money is issued by the government, the government has a “monopoly” on all currency. All the government has to do is digitize more money supply through the Fed whenever bureaucrats in charge deem necessary such as when the Fed expanded its balance sheet by $4 trillion during the 2008-09 Crash.

Government can issue more digitized debt at any time to push money into the economy and, through taxation, can take it out of the economy when inflation ticks up.

Deborah Desouza in a February 28, 2019 article explained MMT this way:

“The central idea of MMT is that governments with a fiat currency system can and should print (or create with a few keystrokes in today's digital age) as much money as they need to spend because they cannot go broke or be insolvent unless a political decision to do so is taken.

MMT theorists explain that debt is simply money the government put into the economy and didn't tax back. They also argue that comparing a government's budgets to that of an average household is a mistake”.

If that is the case, why not run a $100 trillion national debt overnight and solve all the world’s ills with a Super Massive Omnibus Government Bill to Obliterate More Bills (SMOGBOMB)? Make every American citizen and non-citizen a billionaire by giving them newly digitized currency and all our troubles will go away forever.

If MMT is such a “great idea” that works, then why hasn’t every nation since 1900 adopted it already?

The “only” thing MMT proponents hedge their bets on is the threat of inflation. If the government digitizes too much electronic currency and it chases too few workers or resources, then inflation can be ignited.

They say higher taxation will take care of that by taking money out of a possibly overheating economy.

Has anyone noticed “how easy” it is to tax an already over-taxed populace in America in the last 60 years? Taxpayers will resist and rebel at the ballot box whether there is a gold standard backed-currency or one created by bits and bytes.

800 years of history have shown what happens when sovereign nations have put into practice what MMT or chartalism proposes. The Weimar Republic in Germany and the current socialist government of Venezuela are empirical points of reference refuting the claim that sovereign governments can spend all they want and not suffer the consequences of such massive fiscal mismanagement and financial folly.

Once the Hounds from Inflation Hell are unleashed, they destroy economies and take out the most vulnerable people first: the poor and the retired poor. Inflation in the US was 13.5% in 1980 when many Boomers were in their first job looking to buy their first house with a 18.5% mortgage rate.

It can happen again. It probably will.

Perhaps you would like to take a spin on the President Bernie Sanders Magical Mystery Wheel of Fortune to find out if MMT works or not.