How Many Business Regulations Are Enough in North Carolina? 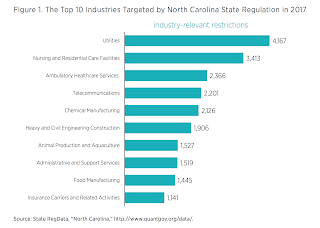 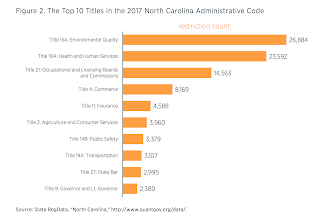 If you guessed 109,350 restrictions in the form of regulations consisting of approximately 8.7 million words, you win.

Mark Twain estimated he wrote between 1400 and 1800 words per day on his way to becoming the most famous author in American history. At that rate, he would have had to write for 15 years straight to match the number of regulations now on the books in North Carolina.

According to the Mercatus Center at George Mason University, it would take 483 hours, or 12 weeks straight at 40 hours per week reading at a rate of 300 words per minute to read all existing North Carolina state regulations.

That is not too bad. They estimate it would take a person 3 years to read the 112 million words in the US Code of Federal Regulations (CFR), all of which affect businesses in North Carolina as much or more than state regulations do.

If you ever want to understand why so many business executives complain about the heavy hand of government bureaucracy, look no further than the 120+ million words in federal and state regulations.

What does it mean in practical terms for any business ranging from small businesses to the very large corporation?

It means that people must be hired to make sure the business complies with the state and federal regulations. It means time and effort must be diverted to complying with every regulation instead of selling more product. Any law or regulation opens the door for litigation which further depletes money and human capital from the primary objectives of the company which is to sell more product and produce a profit for the shareholders.

It means money from sales revenue or investment capital has to be diverted to pay for people who do not do anything more than read regulations and make sure the company complies with them which adds costs to the final product bought by the consumer.

Are all regulations ‘bad’?

Certainly not. Labor safety laws and environmental protection certainly have their place in the modern world of commerce and manufacturing.

But when is the number and scope of regulations ‘too much’ and in dire need of repeal or revision?

The National Association of Manufacturers (NAM) published a report in 2014, ‘The Cost of Federal Regulation to the U.S. Economy, Manufacturing and Small Business’, that estimated federal regulation compliance alone costs businesses roughly $2 trillion per year, or about 12% of GDP annually. Federal regulations cost about $10,000 per employee with small businesses being more adversely affected than large corporations because of fewer employees over which to amortize the cost of compliance.

Added together with the costs of state regulatory compliance, the cost of complying with regulations to any business are enormous every year.

The North Carolina Administrative Code should be thoroughly examined and reviewed with the goal to remove as much administrative burden as possible from North Carolina business operators and entrepreneurs. Surely there are regulations that no longer apply to the current modern economy.

The Texas legislature, for example, has a one-year session but dedicates the off-year to a thorough review of one agency to determine whether it is efficient and achieving its stated intended mission. If they find antiquated regulations and laws on the books, they repeal them the next session.

It would be a surprise to find less than 25% of current NCAC regulations that could not be repealed with bipartisan support. It is worth the effort to find out.