Celebrating The Freedom To Not Agree 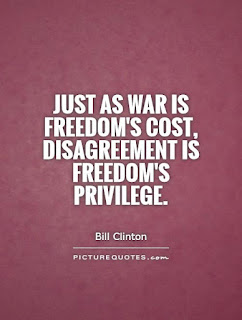 This Fourth of July, do something a little different than celebrating our collective cherished freedoms of speech, religion, assembly, the news media press and right to petition for grievances.

And eating hot dogs and watching baseball and fireworks displays.


Celebrate the same freedom to NOT agree with anyone's freedom of speech, freedom of worship, right to assemble, freedom of the press or right to petition for grievances.

Those are just as important, if not more important, as any of the enumerated rights in the First Amendment, which are a lot in just one amendment when you really think about it.

Remember that the United States of America had its birth 241 years ago not because they were celebrating all of their agreements with the King and Great Britain.

This country was founded primarily on the basis of all of their disagreements with the King and Great Britain enumerated at the end of this post in the Declaration of Independence but prefaced by this memorable paragraphs now known the world over (except in places such as North Korea, Iran etc):
Think about the American history of disagreement over our entire history.  We had no sooner formed a government in 1789 than we began bickering and arguing and politicizing everything and using the press to lambaste opponents (Jefferson hated Hamilton; Adams hated Jefferson; everyone hated Hamilton and on and on and on. If you think current politics is 'nasty' and debased, go back and read some of the news clippings about the way our hallowed Founders treated each other in public. It makes current politics looks like Romper Room to be honest)

'Disagreement' might as well have been etched into stone walls of Congress when it was erected. It has been that important to the creation and growth of the American Republic.

Despite the fact that many millions of people did not agree with the agenda of President Barack Obama, they all had the freedom to speak out against his policies; write about them in the press (and, increasingly day-by-day, on social media which is supplanting mainstream media outlets), not participate in any rallies supporting his policies and not agree with the positions of people wanting to to petition the government for grievances, although certainly we all should support their right to do so even if we don't agree with them.

Today, many millions of people do not agree with the agenda of President Donald Trump and/or the Republican Senate and Congress. They do not have to agree with any of those agendas and have the same rights to not agree with them or even listen to them just as what happened on the other side during President Obama's terms in office.

Isn't that a remarkable concept our Founders gave us long ago? Thank God for all of that freedom!

What would this country be like if we all had to agree on everything one person in the White House at the top or one Congressional session told us to do..'or else!'?

'Or else!' what? It would be awful and it wouldn't be America.

The one thing both sides should agree on is the need to disagree in a not-so-disagreeable manner. Nor should either side condone, and not condemn, violence whenever it erupts on their side or the other.

If you don't like what one side is doing politically, all you have to do is one or all of the following:

1. Turn off the TV set
2. Stop listening to talk radio
3. Get off of social media
4. Volunteer to get someone elected you do agree with
5. Run yourself
6. Contribute money, time and effort to get people you agree with elected
7. Go to the beach, mountains or some cave somewhere and get off the grid totally

All of these activities connote some degree and sense of 'disagreeing' with the opinions and policies other people want to pass on society which includes you whether you like it or not.

You can listen to someone speak if you want to. You don't have to listen at all. You certainly do not have to agree with them just because something comes out of their mouth or brain activity.

You don't have to agree with anything you read in the press. You can disagree with it all you want. You can consider it all 'fake news' or 'the gospel truth' but that doesn't mean I or any other person have to agree with you or the press that writes it. That is a very healthy thing in a democratic republic such as ours.

You don't have to agree with the list of 'repeated injuries and usurpations' any group might petition the government to overturn. But you should support their right to do so since if they are prevented from ever presenting their grievances, one day it might be your grievance that is being denied a fair hearing.

Many times, it takes a pretty brave person to stand up against the tide of popular opinion and say these words: 'I respectfully disagree with all of you. And let me tell you why...'

Sometimes, it take a very brave person to do so. In a very few cases, it takes the most brave of all brave people to speak truth to power. Just as the Founders did in 1776, come to think about it; they knew they were not only risking their fortunes but their very lives if they lost the War against the vaunted British forces.

Benjamin Franklin put it pretty simply when he said this right before he signed the Declaration in
1776:

"We must, indeed, all hang together, or most assuredly we shall all hang separately."

We pretty much are at a state in American history where disagreement in a not-so-disagreeable manner is most needed, yes?

Unless we can all recover a sense of common purpose as Americans and 'hang together' as in 'stick together' as Franklin meant metaphorically and recover a common civil discourse with great elected leaders who know how to negotiate and compromise and get to 'proximate solutions to basically insoluble problems' as Reinhold Niebuhr said, surely 'we will all hang separately' when it comes to dealing with foreign threats, internal budget deficits and national indebtedness and social unrest and class warfare.

Let this Fourth of July be different. For all of us. It is up to each of us to make the difference when it comes to civil discourse. Let's all start trying harder.

We can do this.

The history of the present King of Great Britain is a history of repeated injuries and usurpations, all having in direct object the establishment of an absolute Tyranny over these States. To prove this, let Facts be submitted to a candid world.

He has refused his Assent to Laws, the most wholesome and necessary for the public good.

He has forbidden his Governors to pass Laws of immediate and pressing importance, unless suspended in their operation till his Assent should be obtained; and when so suspended, he has utterly neglected to attend to them.

He has refused to pass other Laws for the accommodation of large districts of people, unless those people would relinquish the right of Representation in the Legislature, a right inestimable to them and formidable to tyrants only.

He has called together legislative bodies at places unusual, uncomfortable, and distant from the depository of their Public Records, for the sole purpose of fatiguing them into compliance with his measures.

He has dissolved Representative Houses repeatedly, for opposing with manly firmness his invasions on the rights of the people.

He has refused for a long time, after such dissolutions, to cause others to be elected, whereby the Legislative Powers, incapable of Annihilation, have returned to the People at large for their exercise; the State remaining in the mean time exposed to all the dangers of invasion from without, and convulsions within.

He has endeavoured to prevent the population of these States; for that purpose obstructing the Laws for Naturalization of Foreigners; refusing to pass others to encourage their migrations hither, and raising the conditions of new Appropriations of Lands.

He has obstructed the Administration of Justice by refusing his Assent to Laws for establishing Judiciary Powers.

He has made Judges dependent on his Will alone for the tenure of their offices, and the amount and payment of their salaries.

He has erected a multitude of New Offices, and sent hither swarms of Officers to harass our people and eat out their substance.

He has kept among us, in times of peace, Standing Armies without the Consent of our legislatures.

He has affected to render the Military independent of and superior to the Civil Power.

He has combined with others to subject us to a jurisdiction foreign to our constitution, and unacknowledged by our laws; giving his Assent to their Acts of pretended Legislation:

For quartering large bodies of armed troops among us:

For protecting them, by a mock Trial from punishment for any Murders which they should commit on the Inhabitants of these States:

For cutting off our Trade with all parts of the world:

For imposing Taxes on us without our Consent:

For depriving us in many cases, of the benefit of Trial by Jury:

For transporting us beyond Seas to be tried for pretended offences:

For abolishing the free System of English Laws in a neighbouring Province, establishing therein an Arbitrary government, and enlarging its Boundaries so as to render it at once an example and fit instrument for introducing the same absolute rule into these Colonies

For taking away our Charters, abolishing our most valuable Laws and altering fundamentally the Forms of our Governments:

For suspending our own Legislatures, and declaring themselves invested with power to legislate for us in all cases whatsoever.

He has abdicated Government here, by declaring us out of his Protection and waging War against us.

He has plundered our seas, ravaged our coasts, burnt our towns, and destroyed the lives of our people.

He is at this time transporting large Armies of foreign Mercenaries to compleat the works of death, desolation, and tyranny, already begun with circumstances of Cruelty & Perfidy scarcely paralleled in the most barbarous ages, and totally unworthy the Head of a civilized nation.

He has constrained our fellow Citizens taken Captive on the high Seas to bear Arms against their Country, to become the executioners of their friends and Brethren, or to fall themselves by their Hands.

He has excited domestic insurrections amongst us, and has endeavoured to bring on the inhabitants of our frontiers, the merciless Indian Savages whose known rule of warfare, is an undistinguished destruction of all ages, sexes and conditions.

In every stage of these Oppressions We have Petitioned for Redress in the most humble terms: Our repeated Petitions have been answered only by repeated injury. A Prince, whose character is thus marked by every act which may define a Tyrant, is unfit to be the ruler of a free people.