(click through title link to see video)
One the most amazing acts in television history, if you are of a certain age, was 'The Plate-Spinner' on 'The Ed Sullivan Show' in the 1960s.

Ed Sullivan was a producer of many vaudeville acts and had really no discernible talent other than he could spot new acts and trends and put them on the air before anyone else knew who they were.

When he announced 'The Beatles!', America went wild. Elvis Presley graced his stage as did innumerable actors and bands.

But there was one act that seemed to be on at least 2 Sundays every month that captivated and mesmerized anyone who saw it: The Plate-Spinner.

Erich Brenn of Austria would come on-stage with a lot of fanfare music in the background and proceed to start spinning plates and bowls and whatever he could get his hands on it seemed on top of 5 or 10 or 15 long sticks on a table or stuck in the stage floor somehow.

All a person could do was to sit transfixed for the 2-3 minute performance watching the plates or bowls start to lose momentum and then somehow, Erich Brenn would spin the sticks and get them moving again properly instead of crashing to pieces below.

So far, in the first 3 weeks of President Donald Trump's presidency, we have been reminded of 'Erich Brenn, the Plate-Spinner from Austria!' mainly because the ultra-left in this country seemed to have gone bonkers over every single action, word and appearance of our new President.

And whether it is by design on the part of President Trump (he coulda been the second 'Ed Sullivan' you know) or happen-stance, all that attention on a tweet he sent out or a comment he made about his daughter's clothing line seems to have unhinged the Democrat opposition to the point where it is all they can do to find the next place to protest, riot or block and impede any conservative speaker or cabinet official from entering a building to speak on a matter.

Which leads us to remind everyone of the truly 'serious' and important work his administration and this Congress have got to do over the next 4 years. The more the left stays unhinged focusing on the trivialities of his plate-spinning, the more will get done to solve the truly big problems we face as a nation, beginning with this great summary below from The Committee for a Responsible Budget 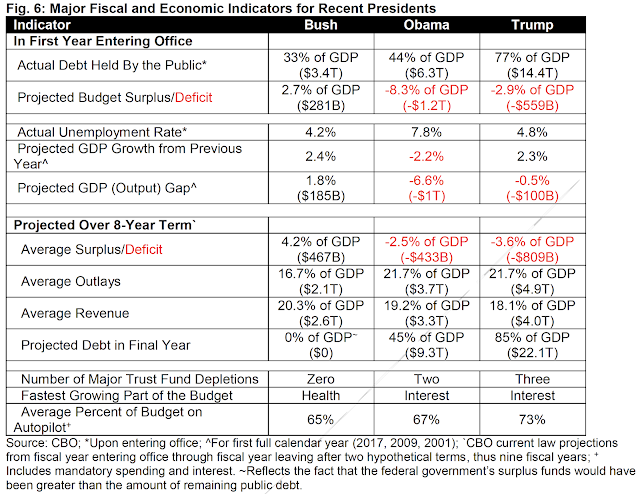 Debt is Higher Than at Any Time Since Truman

Over the past 50 years, the national debt held by the public has averaged about 40 percent of Gross Domestic Product (GDP), and was only 35 percent of GDP as recently as 2007. Since then, debt has grown dramatically, and is now higher than at any time since just after World War II.

This means that President Trump entered office with higher debt than any president since Truman in 1945, when debt was 103 percent of GDP.

Trust Funds Are Headed Toward Insolvency

In addition to the overall debt and deficit situation, President Trump is confronted with a number of major trust funds out of long-term balance, with three that could be depleted by the end of a hypothetical second term in office.

CBO projects the Highway Trust Fund to become insolvent some time in Fiscal Year (FY) 2021. At that point, $70 billion of general revenue that was transferred into the trust fund in 2016 will have been spent in its entirety. As a result, the $40 billion of dedicated revenue will fall about one-third short of the projected $57 billion in spending in 2021. Through 2027, spending will exceed revenue and trust fund reserves by $139 billion, requiring significant adjustments to align them.

Two years later, in FY 2023, CBO projects the Social Security Disability Insurance (SSDI) trust fund will exhaust its reserves. When that happens, beneficiaries will face an immediate 16 percent benefit cut. To delay this cut, policymakers will need to close a $175 billion shortfall between 2023 and 2027. Over a 75-year period, the SSDI shortfall equals 0.65 percent of taxable payroll (the Social Security Trustees estimate a 75-year shortfall of 0.26 percent of payroll).

By FY 2025 – either near the end of a hypothetical second term or the beginning of the following president’s term – CBO projects the Medicare Hospital Insurance trust fund, which funds Medicare Part A, will also reach insolvency. When this trust fund is depleted, Medicare payments would be cut by 13 percent unless policymakers close the program’s $198 billion shortfall between 2025 and 2027 and the significantly larger long-run deficit (the Medicare Trustees project Medicare will be insolvent by 2028 and faces a shortfall of 0.73 percent of taxable payroll.)

Finally, CBO projects Social Security’s Old-Age and Survivors Insurance trust fund will deplete its reserves by calendar year (CY) 2030. At that point, under current law, all beneficiaries would face a 31 percent benefit cut. Though this date is still 13 years away, it is unlikely policymakers will be able to prevent insolvency (or prevent a large general revenue transfer) if they don’t act in the next few years. As we’ve explained before, delaying action on Social Security will ultimately require larger tax increases and spending cuts spread over fewer cohorts with fewer possible exemptions (such as current beneficiaries) and less time for workers to plan and adjust. Over 75 years, CBO projects Social Security’s retirement program faces a massive gap of 4 percent of payroll – the equivalent of one quarter of spending or one third of revenue (the Social Security Trustees estimate a 75-year shortfall of 2.39 percent of payroll and an insolvency date of 2035).'

As always, we encourage you to read the entirety of the report from CRFB and print it out and keep it handy if you have to; it is only 11 pages.

But while the left is getting all steamed up about 'Trump-The Plate Spinner From Queens!', you'll be able to soberly and calmly discuss with your friends and colleagues the importance of reducing federal spending so we can get our financial national fiscal house in order not unlike what has happened in the state of North Carolina over the past 4 years that has led to a $556 million annual surplus in the next budget.

(We couldn't resist: here's the Ed Sullivan Show announcing 'The Beatles!' to the world in 1964.

If you have never seen it, you just can't understand how much of an impact this performance had on America. 73 million people watched it that night when the population of the US was only 191 million folks. That would far exceed current Super Bowl ratings if adjusted for population growth)


The Ed Sullivan Show First Appearance of The Beatles in video on Jukebox[4] from Zip Code on Vimeo.