'Shall We Play A Game' With HB2 In North Carolina?

(click through title link to see video if you can't see it)
By now, you would have thought the fervor over North Carolina's HB2 would be subsiding at least a little bit, wouldn't you?

Nope. Instead it has escalated to DefCon 2 with Obama Attorney General Loretta Lynch issuing a letter telling North Carolina that HB 2 is in violation of the Civil Rights Act and they might withhold billions of dollars in federal aid to the university system under Title IX plus transportation funds and any other federal aid that may flow to North Carolina.

(Late-breaking news: The DOJ now says they will not withhold any federal funds while this issue is in court. The Obama Administration will send a letter to every school district in the nation today advising them to make sure transgender students have access to the restroom that aligns with their gender expression or else they will be in violation of the Civil Rights Act and subject to penalties)

Governor Pat McCrory has filed a lawsuit against the federal government calling their action a gross overreach of federal power and asking for an injunction against any withholding of federal funds plus clarification of whether the ordinance as passed by the Charlotte City Council on February, 2016 included classes of people who were in fact covered by the Civil Rights Act as a protected class of American citizens.

This is not the movie 'WarGames' starring Matthew Broderick in 1983. This is 'not a computer-simulated game' that he thought he was playing with 'Joshua' after he had hacked into the NORAD defense system of America.

This is real-life with real consequences for everyone involved. Not just the political actors but every citizen in North Carolina.

However, it does have elements of 'political gamesmanship' coupled with some deep divisions in political philosophy dating back to the debate over the US Constitution that you need to keep in mind as you watch this saga unfold over the coming months:

I. HB2 Has 'Political' Fingerprints All Over It

As noted in our last post, the Human Rights Campaign is a very well-organized and funded national political organization that advocates the rights of the LGBT community. The Charlotte City ordinance was not passed as a result of any lawsuit or action taken in Charlotte that denied the right to enter public or private restrooms of any person who was transgender but was passed because the Human Rights Campaign supported Mayor Jennifer Roberts in her campaign last fall in 2015.

She promised she would pass this ordinance once elected and 52% of the voting population in Charlotte voted for her so she was 'just following through on her campaign promise' which many people want their candidate to do once elected, right?

There is speculation that she felt this would help propel her to run one day in another run for Congress against incumbent Congressman Robert Pittenger or perhaps Senator Thom Tillis in 2020.

Politics is politics. It happens on both sides of the aisle.

Put your logic hats on for this one:

Title IX funds specifically help female students and athletes from kindergarten through college have equal access to all programs or activities, most notable of which has been the explosion of women's athletic programs since 1972.

President Obama has been a vocal and tireless supporter of females during his Administration.

Even before the announcement that he would not withhold any federal funds while the case was in court, was he really going to authorize the withholding of $4.5 billion in Title IX funds to the State of North Carolina which would decimate women's athletic programs at every publicly-funded university or public school?

We may continue to see the 'threat' of withholding of such funds in order to force the NCGA into changing HB2 in some way. But the immediate rescission of Title IX funds by the Obama Administration to the State of North Carolina would only wind up hurting the very constituency that President Obama and his Cabinet would least want to see hurt in any way, shape or form.

It is like holding a gun to your head while threatening to jump off a bridge into speeding traffic below. No one in their right mind would do either.

No Title IX funds have ever been directly denied to any college or university or public education system.

This particular threat doesn't make a lot of sense.

However, actually withdrawing or diminishing federal grants has been used sparingly over our history and very little in recent years.

The federal government used the Highway Trust Fund four times to force states to comply with federal regulations regarding raising the national drinking age from 18 to 21 in 1987; setting a national 55-mph speed limit (can you imagine 55 mph today?) in 1974 amidst the oil embargo and forcing motorcyclists to wear helmets (overturned by act of Congress in 1995).

In the 1960s, the federal government used the threat of withholding funds after passage of the 1964 Civil Rights Act to force 100 school districts in the South into adopting integration in public school.

The same threat has only been used sparingly since then, most notably in the '80s to force Grove City College in Pennsylvania into compliance with Title IX regulations even though Grove City as an institution did not accept federal aid of any kind, although some of its students did through Pell Grants and other forms of federal assistance.

Most recently, the Obama Administration tried to force states to expand Medicaid coverage in the ACA or risk losing all of their federal match of Medicaid dollars for their citizens in the Medicaid program which ranges from 55-73% of total costs of Medicaid in the states.


'...(A) majority of the (Supreme) Court found the ACA’s Medicaid expansion unconstitutionally coercive of states because states did not have adequate notice to voluntarily consent to this change in the Medicaid program, and all of a state’s existing federal Medicaid funds potentially were at risk for non-compliance. (A) different majority of the Court held that this issue was fully remedied by limiting the Health and Human Services (HHS) Secretary’s enforcement authority, thus leaving the Medicaid expansion (and all other ACA provisions) intact in the law.'

Several observers opined that the Obama Administration 'tried to use a sledgehammer from Washington to pound states into submission and do what they (the Obama White House) wanted them to do rather than have any input into what they wanted to do in that particular state'.

Could it be argued that the Obama DOJ is trying to use that same 'sledgehammer' approach by threatening to withhold $4.5 billion in federal aid over an issue that really was not even a major problem defined by a lawsuit or grievance in Charlotte, North Carolina before February 22, 2016?

To put this in another context, can anyone in the media or on the pro-Charlotte ordinance side of things begin to imagine the firestorm that would have been created had say, President George W. Bush, used the same heavy-handed tactics to withhold millions of dollars from Planned Parenthood across the nation in order to force them to comply with some part of an anti-abortion agenda without any legislative input or confirmation first from the US Congress?

It would have put the wildfires in British Columbia to shame for being just a fire in an outdoor firepit in someone's backyard by comparison.

IV. What Is The Enforcement Mechanism For The Obama Administration IF North Carolina Refuses To Cooperate With The DOJ Letter Or Subsequent Legal Ruling In DOJ's Favor

Is President Obama prepared to send in the National Guard to guard every restroom in North Carolina if North Carolina refuses to comply with the DOJ position on HB2? There has to be millions of public restrooms alone in the entire state of 10 million people today.

Think about it. What is the only other mechanism left to a Chief Executive in the White House to enforce any executive order or Supreme Court ruling?

The Supreme Court can issue any ruling they want but those 9 Justices sitting on the High Court at any time simply can't do anything to enforce any ruling they may make on any issue. The Founders of the Constitution did not give them any enforcement mechanism, thankfully in many regards.

President Eisenhower sent the National Guard into Little Rock, Arkansas to enforce the integration of public schools in 1957 following the landmark 1954 Brown vs Board of Education of Topeka, Kansas Supreme Court ruling that ended segregation in public education. 9 African-American students were protected by National Guard troops as they entered Little Rock Central High School.

Assuming the NC General Assembly fails to comply with the Department of Justice either because of their letter or a subsequent judicial ruling or the threat of the loss of Title IX funds, do you really believe President Obama will send in the National Guard to enforce their view of what sexual discrimination covers under the Civil Rights Act as currently written?

If you do, then we are in far deeper trouble as you will see next.

What we are seeing play out in stark contrast right now in North Carolina is nothing new in our democratic republic with so many competing interests in the state and federal government interaction.

'Anti-Federalists' back then objected to the concentration of power in Washington which superseded the power of the states to control their own destinies.

'Federalists' at the time recognized the need for a vigorous national taxing authority primarily to fund an effective military defense to defend the new nation against further attacks by Great Britain, which happened again 25 years later anyway.

President Obama has made no secret of his disdain for the parts of the US Constitution that he feels hinders his ability to complete his 'Change' agenda before leaving office in less than 8 months from today. This effort is an extra-legislative way to force such change on states without having to go through the constitutionally-mandated process of having the US Congress and Senate consider and pass amendments to the Civil Rights Act of 1964 that would add 'gender expression' to the list of protected classes of people for anti-discrimination purposes.

It is far easier for any President to use the court system to enact such change and hope that a friendly judge or a panel of judges will interpret the Constitution in a way that is commensurate with the political goals of the White House at the time.

The final warning to anyone who is cheering on President Obama as he uses executive orders and DOJ 'enforcement actions' such as this one is this:

'Will you be just as happy to see 'President Donald J. Trump' use the exact same tactics and procedures to enact any of his stated political wishes starting January 20, 2017?'

Take 2 Excedrin headache pills, think about it some and you will wish President Obama had adhered to the tried-and-true process of 'legislative supremacy' our Founders and leaders such as Henry Clay used to keep concentrated power out of the hands of one person in the White House.

Presidents use 'precedent' all the time, you know.

Like 'Joshua' says at the end of 'WarGames': 'How about a nice game of chess?' 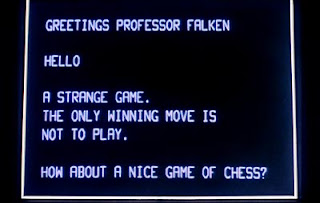