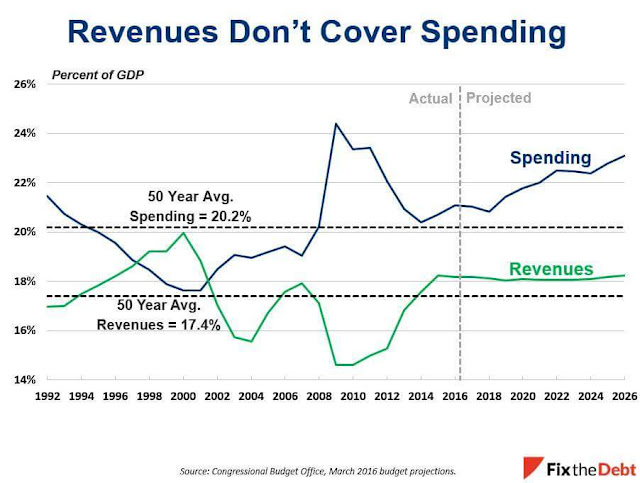 When we started this blog in February, 2009, soon after President Barack Obama was sworn into office as the 44th President of these United States of America, we thought we might write 20 or so postings about the basics of the federal budget with some thrown in on taxes and health care policy for good measure.

Since they were all integrally tied-in with each other.

This is the 591st publication of such ruminations out of 658 that have been written over that 7.1 year period. 67 that we started writing bored even us upon second thought or were so poorly-written or thought-out, we thought the better part of valor was to just let them die on the shelf.

Still, roughly close to 85 ruminations have been published each year since 2009.

And you know what?


Nothing on the federal spending, budget, tax or even the healthcare side of things has gotten appreciably better since President Barack Obama was elected in 2008.

In fact, it could be argued that things have gotten far worse under President Obama during those 7 years.
Take a look at this article which pretty much sums up the total 'success' (sic)  of the Obama White House years when it comes to financial, fiscal and economic matters: 'Obama is Pleased With Yellin As Economy Shows Signs of Slowing'.


If the US economy was a submarine, the captain would be screaming: 'FULL STOP!"

From the Bloomberg article: 'Some economists last week cut their tracking estimates for growth in first-quarter gross domestic product to near zero..'

'Near-zero' means 'zero' especially when you take into account that we still have some inflation in our system.

Do you young people have any earthly idea what 'zero economic growth' means for you and any and all of your friends who have graduated from college in the last 6 years?

It means that the economy is not even growing fast enough to absorb all of the graduates entering the work force beyond what it takes to replace the people who retire or die and otherwise leave the workforce.

It means that recent graduates are probably working at below-normal salaries and wages because in a non-growing economy, businesses do not need to hire any additional employees, especially when such hires means enormous additional costs such as imposed by the ACA and increased regulations over the past 7 years.

'A zero rate of economic growth' means that wages will be stagnant for as long as the economy stays weak. It means chances for rapid escalation through the work force in your chosen industry is nil.

'University of Chicago Economics Professor Dean Wormer' perhaps would say it best on CNBC when confronted with the abysmal economic record of the Obama Administration: (if you can't see the video in the email sent via distribution, click on the title link above and scroll down to this section to view)

Young people of America: You deserve to experience the full benefits of a thriving, growing, dynamic job-creating America.

Those of us who are about to go on Social Security and Medicare (and send you the enormous bills to pay for out of your weekly, bi-weekly or monthly paychecks forever it will seem to you) at least had the chance to live through 2 of the greatest economic explosions America has ever experienced: 1982-1988 under President Ronald Reagan and 1995-2000 under President Bill Clinton.

A 'President Bernie Sanders' would produce an economy that undershoots even that of the Obama White House. A 'President Hillary Clinton' would continue the same economic policies of President Obama that has produced 0.0 GDP growth as she has repeatedly vowed on the campaign trail time and time again.

Use the left-side of your bright young brains to analyze all the data, facts and figures before you vote this fall. It is all well-and-good to vote for a single issue or for a certain personality because you 'like' them or 'like' their Facebook page or on some other social media

However, none of that will mean a thing to you if you and your friends: 1) can't find a good, high-paying job; 2) can't move up the economic ladder of success as fast as you want to or 3) even buy a starter home and begin a family.

Otherwise, you will be voting for 'Zero.Point. Zero' economic growth. Again. After 2 previous elections already.

Remember how Dean Wormer said it. That is all you need to know about your future.