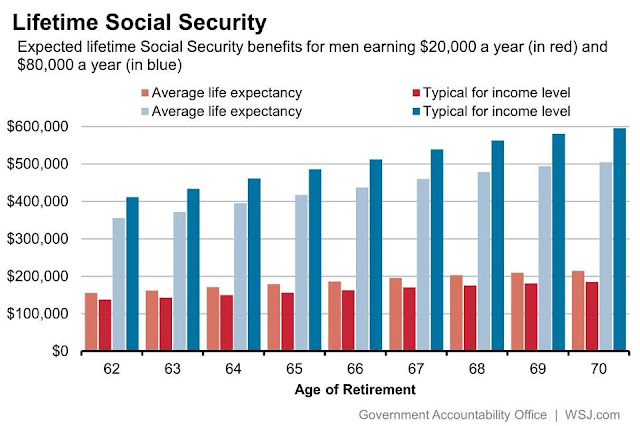 One of the more egregious inequities in the US federal budget is the way African-American males are treated by Social Security.

How is that you say? ‘Social Security was passed by Franklin Delano Roosevelt to help every older person regardless of race survive in their golden retirement years!’ you can hear defenders of Social Security start to shout.

If you, or an African-American, or a Hispanic or any person who has worked during your lifetime, male or female, die 5 minutes before you become eligible for Social Security benefits, now at about 66 years of life, you will receive exactly $0 for all of those hard-earned dollars and cents you religiously paid in payroll taxes every tax period, whether you liked it or not and whether you even knew it or not.

Your surviving spouse will be eligible for benefits after your death. But it will be nowhere near what it could have been had Social Security been set up as a defined contribution program similar to a 401k program or IRA that takes your hard-earned dollars and puts them in a dedicated investment plan with only your name on it, to grow through the miracle of compound interest and dividends over the years of your working career.

So why does this matter if someone is white versus African-American or Hispanic or any other ethnicity?

The General Accounting Office (GAO) recently published a report, ‘Shorter Life Expectancy Reduces Projected Lifetime Benefits for Lower Earners’ which sounds obvious except when you delve into the numbers and see that disproportionately high numbers of African-American males are affected.

Average life expectancy for African-American males in the United States now is about 72 years. White males can expect to live over 79 years. Everyone is living longer nowadays due to better nutrition and advances in medical breakthroughs and technology beyond the wildest dreams of people even 25 years ago.

However, when you consider that the eligibility age for Social Security is 66, a fair number of African American males will not live long enough to receive one dollar of any of the Social Security payroll taxes they paid into the system over their lifetimes.

The truly only ‘fair way’ to rectify this injustice is to transition to a private investment system for each and every person. Instead of receiving nothing in benefits in the case of the African-American male mentioned above, had such a system been in place since 1980, even at a low-wage scale, his estate would have had perhaps several hundred thousand dollars in it that could be used to pay off the mortgage, pay for someone’s higher education or generally take care of his surviving spouse in a more comfortable fashion.

The current Social Security system can be considered the bare minimum, ‘The Minimum Wage’-version of what a retirement plan could look like.

With a new system that uses direct investment vehicles for each and every person, at least when a person dies, his or her family could receive a lump-sum payment far in excess of any amount of SS benefits they could have ever received during the working partner’s lifetime.

It is one major way millions of lower-income and African-American males can help their families and generations-to-follow better off financially as they build wealth for the future. Black male lives matter just as much as every other working person’s lives matter.

We should change Social Security to make it happen.

Maybe we can get some of the political candidates running for any office, say, those running for President, to start discussing matters of importance such as this with the American people.