But take a look at the second verse of a quote commonly attributed to Winston Churchill but which probably originated with other commentators, philosophers and politicians before him:

'If you are old and not a conservative, you don't have a brain!'

At what point exactly do young people cease being 'so liberal' and start to become 'more conservative', at least on fiscal issues such as government spending and personal taxation?

Apparently, it is when they get jobs that pay them between $40,000 and $60,000, or about the same income level they start to pay significant taxes on their income over what they pay in the only real 'flat tax' we have, the payroll tax, according to a poll from Reason-Rupe. 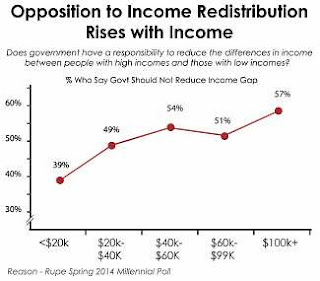 Wonder why that is?

It is much easier to be idealistic and say we need such-and-such a program when we are younger and in college than to step up to the plate and say:

'You know what? We need to address this problem from a public policy perspective and I am willing to pay 10% more of my income in taxes to pay for it! And so should everyone in my city/state/country!'

When was the last time you ever heard a political candidate say that in public?

The answer is: 'Never'

It is because we all want to provide the best lives we can for ourselves and our families. That is the reason people came to America in the first place; to be able to lead lives with as little interference as possible, or none in many cases, from government or religious authorities who controlled life in European nations at the time.

It gets very hard to do the more the government takes out of your paycheck each and every week, doesn't it?

No one is really arguing for a 100% repeal of the welfare state from the conservative side of things. What they are arguing for is some consideration about the size and scope and efficacy of the totality of welfare programs that exist in America today.

If welfare programs are working at maximum efficiency and are producing optimal results, as in reducing poverty, increasing health standards and educational success, then they should be continued.

In fact, if welfare programs work 100% as proposed and envisioned, poverty should now be a thing of the past, shouldn't it? The purpose of welfare programs is to eliminate poverty, isn't it? Not perpetuate it.

However, if any welfare program is deemed ineffective or worse, detrimental and causing adverse outcomes, then they should be reviewed and either eliminated, reformed or replaced until we find something that does work to reduce poverty for example.

One thing for young people to consider is how the federal government is offering to provide such a welfare state with their money. For example, Social Security was passed in 1935 as a government solution to provide temporary financial assistance to millions of senior citizens who were starving and out of work during the Great Depression.

That was 81 years ago. Social Security has remained fundamentally unchanged since then except for the expansions of coverage and increases in the payroll taxes it has taken to finance those expansions.

What is happening with all the money every young person has taken from their weekly, biweekly or monthly paychecks? Is it going into special trust accounts with their name on it where their money is invested so it can earn 6%+ per year for the next 40 years of their work careers and they can retire with a healthy cash nest-egg of say $1 million at age 67 (which will be their minimum legal retirement age at least by 2056?

Nope. Every dollar and cent of their OASDI payroll taxes paid today goes out the next month to current retirees or dependents on Social Security. That is the definition of the ‘welfare state’ if there ever was one.

Young workers pay now with the hope and expectation their children will do the same in 40+ years or so. Except their children's payroll taxes will be much higher then unless we do something now to reform Social Security.

Shouldn’t we be using our conservative 'brains' more now?