What Happens When The Barking Dog Finally 'Catches' The Car?

The Freedom Caucus (TFC for short) of the Republican Party has knocked off a sitting Speaker of the US House of Representatives, John Boehner, and brought down the next logical choice, Kevin McCarthy who dropped out of the race last week.

Each of us remembers some crazy dog in the neighborhood that would bark loudly and chase every car up and down the street whenever they came by.

Back before the days of 'Invisible Fences', we remember seeing dogs run alongside of a car for 200-300 yards at a time.

It is a wonder every dog in the neighborhood was not turned into roadkill.

We all used to laugh but deep down inside, you had to wonder:

'What does that dog think he is going to do with that speeding car if he ever caught it?'

Such is the case with The Freedom Caucus of the GOP in the US House of Representatives today.

They are the dogs who caught the speeding car and made it stop somehow.

Didn't they plan on having an acceptable candidate to replace Speaker Boehner before they toppled him from his post? Who is going to drive this thing called the US House of Representatives which is so important to the fundamental operational structure of our government the Founders listed it as Article I, Section 1 and enumerated its powers in Sections 7-8 of the US Constitution that all of these TFCs say they want to follow 'to a T'?

Except they really don't. They don't want to believe that the Constitution actually tells them they have to:
Period. That is how you do it according to the sacrosanct US Constitution, loud and clear. There is no other way. Just as the Founders planned it long ago.

What is the preferred legislative strategy of the TFC, or their cousins, the Liberty Caucus (TLC), even if they do get someone elected to the Speakership to their liking?

You guessed it: Shut down the federal government again. Use the debt limit and/or the CR (continuing resolution) to 'threaten' President Obama into agreeing with them to defund Planned Parenthood, repeal Obamacare (sure, the same bill that has his name attached to it for all eternity now) and shut down the Iran Nuclear Deal.

Where is shutting down the government 'enumerated' in the sacred US Constitution they say they revere so much?

People in America don't want their government to be shut down. Even the biggest opponents of government anywhere want the military to defend them and the roads to be smooth without potholes, don't they? Are both of those functions 'government programs'?

People of all ages, race and political philosophy 'want the government to work well', not 'not at all'. It is a matter of size, cost, efficacy and efficiency that causes such fractious political division, not the argument over whether or not to have a federal/state government system anymore, yes?

Besides, even in the case of a 'government shutdown', Social Security checks will still go out every month; 'essential personnel' however loosely defined, will still go to work and guess what? The last time there was a shutdown, the people who were sent home received back pay AFTER they had what wound up being a paid vacation at government expense.

If it worked all the time, we would be all for it. But the President almost always wins because he has the bully pulpit and a single voice drowns out the cacophony of 247 House Republicans and 54 Senate Republicans arguing with each other about when to cave-in to the President and look sheepish doing it. Again.

Has anyone in the TFC, the TLC, Congress and the US Senate noticed that as bad as Hillary Clinton's unfavorable ratings are and how many people say they won't vote for Donald Trump in a general election, the ratings for Congress is below that of cockroaches?

At least the disgust with Congress as a whole is bipartisan. Why try to accentuate the disgust with the Republicans now in charge of both the House and the Senate by shutting down the government again?

What are some of the major problems that need to be solved which won't be solved if the TFC shuts down the government?

1) 'We want a balanced budget!' The Freedom Caucus says.

Reality Check: The TFC will not balance the budget anytime soon unless they offer an amazing list of proposed cuts, reductions and massive reforms to the political 3rd, 4th and 5th rails of Social Security, Medicare and Medicaid, which, along with all other entitlement spending in the federal budget, collectively represent 66% of all spending today. 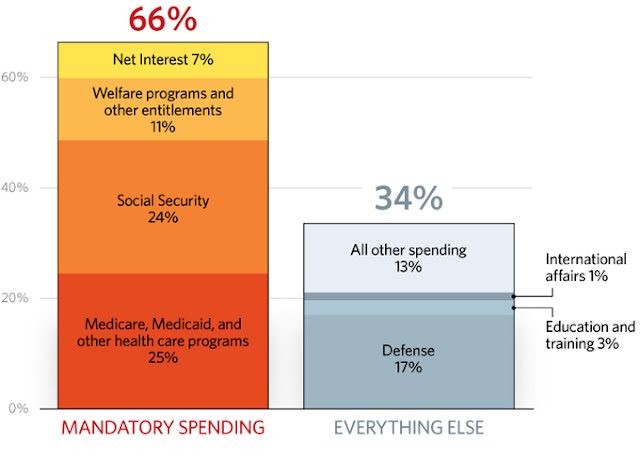 They could raise federal taxes on everyone to close the $500 billion annual gap we now have. They have said they won't consider that option so the only thing left is to curb excessive spending.

Shutting down the government for a week, a month or even a year will not get us any closer to balancing the US federal budget.

2) We want to reduce the federal debt of $18 trillion+!' The Freedom Caucus says.

Reality Check:  See above. Unless we somehow magically hit upon a 10-year economic expansion that averages about 5%/year, we are not going to even balance the budget first to stanch the bleeding that leads to more debt being incurred, much less generate enough surplus revenue to begin retiring government bonds.

3) We want to replace Obamacare!' The Freedom Caucus says.

Reality Check: Since so much of the ACA (Obamacare) is tied to entitlement spending through Medicaid expansion and the like, funding for it will continue even if the TFC shuts down the government again.

The biggest weapon Congress has on any issue is the power of the purse. Zero out the budgets for the departments and agencies charged with enacting ACA or, better yet, the agencies such as the IRS that are supposed to be going after individuals who do not purchase an ACA-approved policy in any given year. There are plenty of volatile issues the Republican Congress can hit upon if they want to attack the policies of President Obama for political purposes. Keep hammering away at those if you want to.

But don't shut down the government again. Please.

Elect someone like Paul Ryan to be Speaker. Get creative about using legitimate Constitutional powers to force Obama to the bargaining table on something, anything! Reinstate congressional earmarks if that will help get wavering Democrats to come to your side on any issue of concern.

Just don't act like the dog who finally caught the car and didn't know how to drive it.