Is North Carolina Punching Above Its Weight When It Comes To Funding Higher Education?

There are always interesting things you discover when you start looking deep into statistics and facts of any public policy issue.

In North Carolina, one such 'interesting' case is the whole issue of higher education. Particularly the issue of who should pay for it: should it be the taxpayer, or the student and his/her family?

When talking about budget issues in general, a couple of things stand out when you look for serious budget analysis by political parties or unbiased special interests:

Speaking of higher education spending in particular, there has been much written about the demise and destruction of the college system in North Carolina since the 2008 recession, but especially since the Republicans gained control of the General Assembly in the 2010 election and the Governor's Mansion in 2012.

With that in mind, we thought we would ask several people both in and out of state government the following question:

Where does North Carolina rank in terms of overall absolute dollars appropriated to high education vis-a-vis every other state in the Union?

(Remember, North Carolina is now the 9th largest state in the country.)

Based on news reports and political commentary, many have guessed that North Carolina ranks 25th, 35th or even 40th in the country when it comes to spending total amounts of gross dollars on public education.

Is that true, based solely on the facts and the statistics put out by reputable independent review groups?

The answer is 6th. North Carolina will spend just under $3.8B this last fiscal year on 16 campuses plus the NC School of the Arts and at 59 community colleges strategically located around the state.

Isn't that a little surprising? Based on relative population size alone, North Carolina should be in the 9th slot for overall spending (which would be New Jersey, at $2.07B this past year).

Ok, but what does all this mean?

1) North Carolina is still 'punching above its weight,' as the old boxing adage goes when someone in a lower weight class moves up to fight against heavier, stronger opponents.

2) In return for a higher allocation of state appropriated dollars (the taxes you paid), students who go to UNC universities across the state pay a far lower in-state tuition than, say, students in Illinois do.

Students in UNC system universities could expect to pay an average of $6,677 last year in tuition and fees for the school year.

Students in Illinois system universities could expect to pay $12,770 last year in tuition and fees for the 2014-15 school year. Almost double what North Carolina public university students paid. Illinois has about 30% more people living in that state than we do in North Carolina.

Take a look at the chart below. Almost all of the top 10 states are just now reaching the level of expenditures they had in FY 2008, with Illinois and Florida being the two most notable exceptions because of large increases they have been able to appropriate to higher education.

The Recession of 2008-? was a nasty one. Don't ever let anyone ever try to tell you it wasn't. The most pronounced effect it had was on state budgets and on public education across the nation. Medicaid budgets continued to grow unabated in many states which further crowded out increases for public education for the past 6 years.

We can and will continue to have spirited debate on how much to appropriate for the public university system and community colleges forever in all likelihood. Questions about salaries, overhead, pensions, health care coverage will always be in the mix.

One thing that would be helpful to have at your side as you consider all of these debates is some context and idea about what the level of spending is today in total for higher education at your state's public universities.

Otherwise, questions about the 'proper' level of in-state tuition versus out-of-state tuition and all of the other items named above get lost in the debate much like a picture loses its identity the closer to zoom in on it. Pretty soon all you see are the pixels on screen and you forget whether you are looking at a portrait or a landscape. 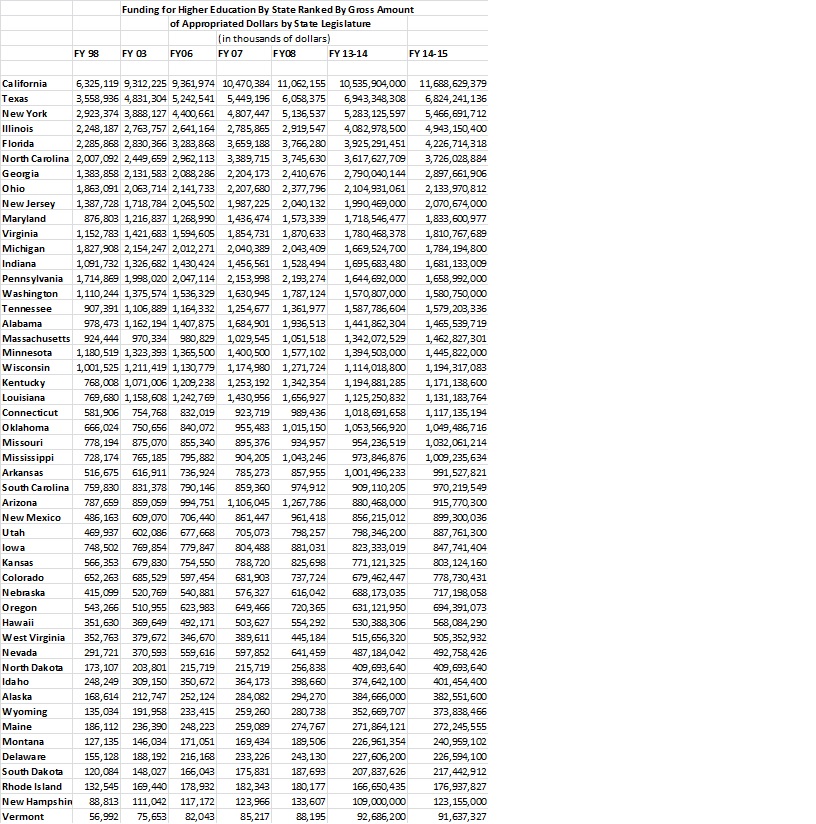 * These are expected numbers for FY 2014-2015. Included are appropriations for community colleges and public universities (source: Grapevine, Illinois State University