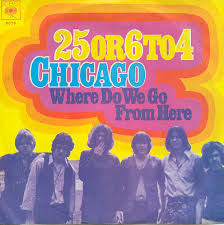 The band Chicago had a great song that made next-to-zero sense the first couple of times you heard it in the 70's growing up.

It still doesn't make a lot of sense to be honest about it. It is just a darned great song, mainly because of the pounding opening riff of cello, drums and horns. It still conjures up images of junior and senior high school pep rallies for some reason.

Here's some other numbers that don't seem to make a lot of sense to House Republicans or Rebellious Tea Party Republicans nowadays in the aftermath of Speaker John Boehner's resignation:

If some modern day band or rapper can make a song that makes sense out of those numbers, then God bless them. We hope they make as much money off of their song as Chicago did off of theirs.

We bring this up because of many discussions we have had with well-meaning and well-intentioned people since Speaker Boehner announced his resignation who are frustrated that the Republicans who now control both the US Congress and US Senate have not been able to derail (take your pick of the following):

Among many other issues.

The thinking goes along the lines of this:

'We gave you control of the Congress in 2010 and the US Senate in 2014 just like you leaders, Boehner and Senate Majority Leader Mitch McConnell of Kentucky asked us to and so what? You have not accomplished any rollback of any important issue in the last 4 years in the House or the last 9 months in the US Senate?

Why should we support you guys ever again?' seems to be the prevailing sentiment amongst the 'Truly Disgusted With Everything' Caucus.

It is one reason why you see so many people flocking to Donald Trump, Ben Carson and Carly Fiorina on the Republican side of the presidential primary race so far. These voters are completely fed up with everyone elected and they are just throwing their hands up in the air in despair.

We think it highlights a more important problem in America today:

Constitutional Illiteracy on the part of the American Public.

And since many constitutionally illiterate voters have elected many of their own to represent them in Congress, apparently those elected representatives have no idea of how a bill becomes legislation as even the most casual observers of 'Schoolhouse Rock' would know.

Whatever happened to basic junior high school civics classes anyway? Have they been replaced by Common Core math classes where 1+1 don't add up to 2 any longer?

Let's take a basic review of what most people used to learn in the 7th or 8th grade:

218 is the first key vote you gotta get to win on any bill before Congress. It can be a stand-alone bill or a massive omnibus bill but any bill has to get 218 votes to pass, usually after also receiving 218 votes on a Rules Committee vote governing the procedure and order of the vote to come.

GOP has 247 Members in the US House so they got that covered when it comes to passing anything and everything. Just like Nancy Pelosi and the Democrats had full control of the throttle from 2009-2011 when Obamacare was passed.

60 is the next voting hurdle to cross in order to close debate in the Senate or 'invoke cloture' as they say. That is not so bad; it used to be 100 since 'unanimous consent' had to be secured in the Senate in order to allow debate on any issue in the pure filibuster, pre-limited cloture vote years.

That is a vestige of the Roman Senate where unanimous consent was necessary to pass any legislation. Usually under the threat of the Caesar at the time burning down your mansion and all your crops and vineyards if you didn't vote for his expansive plans of grandeur but that is another story.

The GOP has 54 US Senators today. Unless they can bribe 6 more Dems with bridges and roads, which can be done, that is the end of the road for any repeal, reform or tweaking of any issue above such as ACA, Iran Deal and immigration.

Even if Senate Majority Leader Mitch McConnell could get to 60 votes to invoke cloture and start debate on the issue at hand and then won 51 votes to pass anything in the Senate, President Obama has promised to veto anything Republican, the exact mirror image of many Republicans who swore to oppose anything Obama wanted to pass in 2009 when they had no earthly way to do so in the House or the US Senate because they were in such deep minorities from 2009-2011.

President Obama, sadly, has shown the propensity of a hamster to work with House or Senate Republicans on anything, even after he lost the House in 2010 and the Senate in 2014. It is like nothing changed to this White House. He just decided to pick up his pen and issue executive orders and enact regulatory dictat to get around the duly-elected bodies of Congress and Senate, ALL of which can be reversed on Day 1 of a Republican President if elected and sworn in on January 20, 2017.

Executive orders have the lasting power of a drop of water on a hot hot pan on the stove if the White House changes parties. That is the trouble with President Obama not working with Congressional Republicans to build broad-based consensus on treaties such as for the Iran Deal and on legislation such as the ACA. The second a Republican President takes over the White House, and assuming the House and Senate stay heavily Republican, he/she can dismantle any executive order issued by President Obama with the stroke of the pen.

The well is so poisoned in Washington today that the House GOP could propose a bill calling the sky Carolina Blue and Obama would respond: 'That is unfair to the other 323 NCAA basketball teams so I am going to veto it!'

So once he vetoes the Carolina Blue Sky bill, the House has to get to 290 votes to override his veto which means 43 of Obama's Democratic supporters in the House will have to buck their Presidential Leader and join with the Republicans.  Which ain't gonna happen.

But if they get to 290 votes somehow in the House, Majority Leader McConnell in the Senate would have to get 13 of Obama's Democratic supporters in the Senate to buck their Presidential Leader which none of them have shown the willpower or backbone to do so far almost 7 years into his term.

Perhaps Teddy Roosevelt would say of them: 'I could carve a better backbone out of a banana!' Or an eclair in other denunciations of political opponents at the time.

However, the simple fact of the matter is that Republicans who want to change things in Washington don't have a 'Boehner' problem or a leadership problem.

They have a 'math' problem, plain and simple. For any talk show host or activist to be 'angry' that John Boehner did not overturn Obamacare, the Iran Deal or the executive order on immigration like Hercules cleaning out the Augean Stables before sunrise shows an extreme lack of understanding of how our government works which is even more scary for seemingly highly educated people.

If you think Speaker-to-possibly-be Kevin McCarthy is going to succeed in doing the impossible that John Boehner failed to do somehow, stop it right now, please! You are going to only frustrate yourself no end and possibly say some things that will wind up making you look foolish out in public which is something you should avoid doing at all costs because once it is out there, you can't take it back.

In days gone by when there were 91 Southern Democrats in the House and maybe 10 in the Senate, those 'Blue-Dog Democrats' would often side with the Republicans on matters of fiscal policy and national defense and create the majorities to pass bills and then, if need be, override a Presidential veto from time to time.

Today, there are 3 Blue Dog Democrats in the House. There are no liberal-to-moderate Republicans from New England any more which also provided some ballast the other way when they sided with the Democrats on some issue or the other.

We have a completely polarized elected Congress and Senate and nothing John Boehner could have done would have changed any of those dynamics or basic facts of life regarding passing legislation in Washington today.

We have some ideas on how the next Speaker might want to approach the situation but we would suggest everyone first read 'Henry Clay: The Essential American' by David and Jeanne Heidler of Texas A&M University to see what a 'real' Speaker of the House and then later, Majority Leader of the Senate did to establish 'legislative supremacy'.

Henry Clay constantly challenged His Excellency, President Andrew Jackson whom Clay hated with a passion and whose passion was returned in like-kind by President Jackson himself.

It is amazing they didn't shoot each other in a duel at 10 paces on the Washington Mall at sunrise one morning.

It would make for an interesting session or two of Congress...as long as not passing anything is your idea of 'interesting'. Which has a certain allure to us right now, truth be told.

Congress does have the power of the purse, however and they should use it as we will discuss in a later posting. The first thing to know though is how your rebellious Congressman or Senator feels about certain issues that might be near and dear to their hearts, and thereby we mean 'their re-election hopes and plans and dreams'.

That might tell you something about why it is so hard to get 100% of all Republican votes to repeal, revamp or reform some government program or issue.