Sometimes sure seems that way, doesn't it?

How can we go from a weak economic expansion to what could be called a recession if it happens two quarters in a row in about 30 days?

Is the process rigged to make President Obama look better in the public eye than his economic policies have proven out to be?

We have been wondering about this perceived problem for a long time and decided to ask the BEA if this was true or not.

They send back this link of 'Vintage History of GDP' as if it is some fine wine or something.

Below is the first page where you can see the detailed accounting of the Advance estimate followed by the subsequent second, third and revised, and then in some cases, revised again, GDP growth estimates.

Take a look and then refer back to the 'Vintage History' to see how the BEA has adjusted its GDP growth numbers going back to 2002 under President George Bush 43. 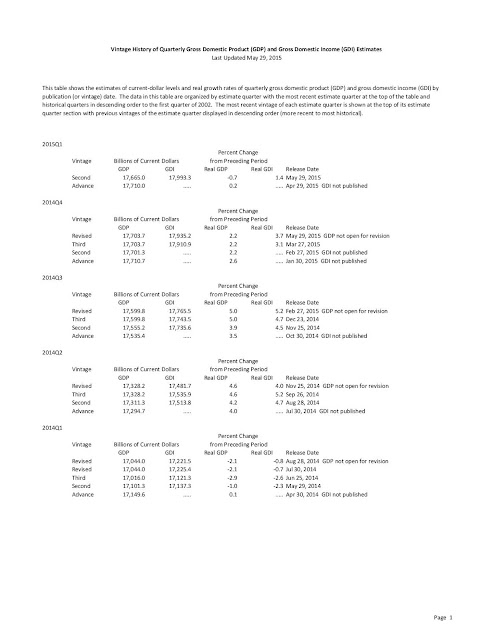 What may surprise you is that, contrary to public opinion depending on whether you support or oppose the President in charge at any moment in time, economic growth revisions seem to be as uniformly distributed during the Obama years as under the Bush years. Advance estimates were revised up and down with about the same regularity as during the Obama years.

BEA supplied this link for those of you who want to go back further to analysis historical trends going back to 1921 and the good old Coolidge growth days of the mid-1920s. President Coolidge's track record of cutting federal spending, federal debt, federal taxes and balancing successive budgets all the while overseeing an economic explosion in the US economy may never been seen again.

However, one thing that might not surprise you as you analyze the 'Vintage Data', which we encourage you to do with a fine wine or vintage scotch or rye whisky in hand, is that the average rates of growth each year under President Obama have been about half the historical norm in America.

It could be argued that we had to come out of the worst Recession since the Great Depression and that is true. However, the highest rates of growth usually occur in the first couple of years AFTER the end of a major recession, mainly because the economy is replacing millions of jobs that were lost during the prior recession, not creating marginal millions of new ones.

Go ahead. Take a look at the entire Vintage History. We can wait while you look, gape and stare.

We have long been a critic of over-spending at the federal level and massive accumulations of federal debt that has to be serviced, namely 'interest has to be paid whether we like it or not' on every dollar we borrow from overseas or from individual investors.

We have long been a critic of over-regulation that goes far beyond the mere oversight function of government to keep us all safe and healthy in the marketplace. When you have legislators who know next to nothing about banking or health care writing massive laws governing and hamstringing the banking industry such as Dodd-Frank or healthcare such as the ACA (didja see where BCBSNC wants to raise ACA premiums 25% next year because of, you guessed it, 'higher health care costs'?) and acting like they know how to run both businesses, which they don't, that is where we draw the line on excessive government regulation.

Under President Obama's leadership, we have had both for the past 6 years now and counting. We see no reason to believe that the economic growth rates under his leadership will magically double in the next 18 months to get back to the US historic norm, do you?

Why should they? Most businesses have learned how to operate without adding on too many new employees to avoid the direct and administrative costs of such things as the ACA. What money they may be making is spent disproportionately more on legal and accounting fees to comply with the excessive regulations now in place.

No wonder the economy is so sluggish. The American Economy is sputtering along more like an old jalopy with fouled spark plugs than a sleek new BMW speeding down the highway.

What happens in the American Economy affects all of us whether we are working, retired or not. Especially if you are under the age of 30. These are your golden years in terms of establishing yourself in your career and gaining skills in the workforce that will follow you the rest of your life.

It is also the time when any money you can set aside for retirement will grow at its greatest potential. $1 set aside in 2015 and allowed to grow in value and earn interest or dividends will be worth a heckuva lot more than $1 set aside in 2020 or 2030 or 2040 down the road.

Which makes this next Presidential election very critical to you young people. You are either going to choose a President who understands how to grow this economy and provide a world of opportunity for you to participate in or you are going to choose a President who wants to continue the top-down management approach of the Obama Administration that is now proving to be one of the slowest economic growth creators in the last 100 years.

Just look at the numbers. The BEA doesn't lie.