Is America The Greatest Country Ever? 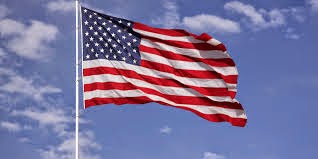 We were driving around town at the beginning of Memorial Day weekend and started to notice how few American flags we saw on the front porches of homes in the various neighborhoods.

So we immediately went to Ace Hardware to buy a new bracket for our flag and went home to put it up about 30 minutes later. We were embarrassed that we had not put the flag holder on our home earlier.

We'll give everyone the benefit of the doubt and give everyone at least until Monday to get their flags out to honor our men and women who have served in our nation's military throughout history.

Roughly 1.36 million soldiers have died in combat since the Revolutionary War started in 1775, half of whom died from disease or complications from wounds suffered in battle or from unsanitary medical attention after battle.

0.25% of the entire population of Americans who have ever lived in this nation have made the ultimate sacrifice to protect our freedoms, notably of which is the freedom of speech for us to say whatever we want about our government, elected leaders, military, teachers, economy and religious beliefs both good, bad and indifferent.

We owe every service person, not only those who died but those who survived as well an enormous debt of gratitude not only this Memorial Day weekend but every day of our lives. Shake a hand of a serviceman or woman when you see one in an airport or buy them a cup of coffee if you see them in a Starbucks and tell them how much you appreciate their service and sacrifice for the rest of us. They always smile and say they appreciate it very much.

All this got us to thinking about the negative comments made about America from many sources lately, much of which seems to stem from this current White House for some reason.

We have been waiting patiently now for 6 years to see President Obama break out the champagne, wave the flag high and wide and extol the virtues of America in a speech or at some commemoration or other in a way that makes everyone burst with pride to be an American.

Type in 'President Obama waving the American Flag' and see if you can find a picture of our President waving an American flag of any size at at any event while President. Sort of really odd, isn't it?

Maybe we have missed his flag-waving but we haven't missed many of his proclamations about America. While respectful, his speeches about America always seem to be moderated with some jab at successful business people or Christians or free enterprise or capitalism or some aspect of American life that he just does not seem to like for some reason or another. A President of the United States of America should at least be our Head Cheerleader-in-Chief, shouldn't he?

With that in mind, we thought we would ask this provocative question to ponder this Memorial Day:

'Is America the greatest nation to live in ever in recorded history?'

Let's take a brief look at some of the things we can be thankful for about living in the American Democratic Republic and see if we can't all be flag-waving patriots this Memorial Day:

We don't have any idea if living in the 'Glory of Rome!' was all that is was cracked up to be in the movies or in the glorified history books. We think living in Rome or in ancient Athens in the glory days of the rise of philosophy and the arts in Greece must have been a great experience, assuming you were a wealthy male of appropriate birth and standing in the community, that is, and not a slave or a women or a foreigner or outsider for some reason.

America has warts and foibles today, there is no questioning that. We are not a perfect utopia and we do not live in a state of nirvana, that is for sure.  America has made many mistakes and created many problems over the years here and abroad either intentionally or not. Many of which we are now trying to figure out and put back into Pandora's Box if we can before it is too late.

However, we think any reasonable person can take an objective and fair long-term look at the balance scales of history and the positive impact America has made in the course of human endeavor in life on this planet, and have to conclude that living in America is far better than not living in America for the past 240 years.

If not, why do so many people still want to come here to live?

You still have time to go get an American flag today and put it on a post in your front yard high for everyone to see. America still has a lot going for it, contrary to what you may see and hear on the nightly news every day.

Namely you and others who care enough about it to do something to preserve it for our future.