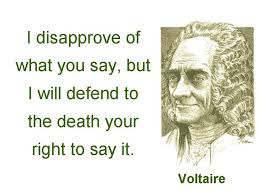 We are always interested in seeing and hearing how different people interpret 'The American Dream'.

So far, so good. As long as you live on an island by yourself with absolutely no interaction with any other human being, yes?

On an island, you can 'say and be and do' whatever you want. Mainly because there is no one else to 1) offend; 2) hurt; 3) take advantage of, or 4) defeat in any sort of transaction either personal or commercial.

As a lone survivor on a desolate island with only enough fresh water and food on which to exist, you can be a racist, a homophobe, a right-wing idiot, a left-wing Obama zombie or even a mild-mannered quiet thoughtful level-headed person if you so choose. No one else gets hurt; you get to say and do and be anything you want.

But who wants to live on a desolate island? Even if you have 100% agreement with yourself all the time.

How about 'the freedom of disagreement' if I don't want to agree with some, part or any of what you have to say about any particular issue? Isn't that a basic American freedom we sort of take for granted? Is there any rule or regulation that says each and every person has to agree with everyone else on everything?

The Nazis and the communist regimes in the former Soviet Union thought they had the solution for making sure everyone thought the same and did what they told them to do. 'Peace' in those cases was understood to be 'acquiescence to the authorities in charge of the government', not just the absence of war.

We got to thinking about how unique our American way of life is this week while talking with some bright young friends who have some big ideas about changing and improving the way media delivers the news, and not just the 'news' news but the facts behind the news.

Good for them. We need better sources of information to inform our electorate. Right now, if you read any of the daily news sources, you just don't get the sense that any of them are fairly presenting the facts behind the news with any sort of dispassionate objectivism, do you?

The main question that came to mind was this: 'Why are Americans having such a hard time lately getting along?'

We have race riots in Ferguson and Baltimore. No one seems to be able to pass anything through Congress of any great degree. The economy doesn't seem to be expanding fast enough to provide well-paying jobs to everyone who wants to find one.

All you hear is one side blaming the other for all the problems under the sun. If Jesus was a Democrat who was seen by the Republican Caucus in the US House walking across the reflecting pond on the Washington Mall, they would all say in unison: 'Jesus can't swim!' And vice versa.

It is that bad nowadays.

These young dreamers brought to our attention the following letter to the editor in the Raleigh News and Observer by Herb Eckerlin, Professor of Mechanical and Aerospace Engineering at NC State and a proponent of solar power.

You gotta think some desert that gets full blasts of sun all day long might become the 'Silicon Valley for Solar Power' before North Carolina but that is another matter.

What struck us was that instead of denigrating opponents of solar power as 'idiots' or people 'who don't know anything about science or solar power', Professor Eckerlin chose to stay on the high road and deal with the facts of the issue. Rather than engage in ad hominem attacks on anyone*, Professor Eckerlin chose to act like a distinguished professor of science that he is and try to examine all sides of the tax credit issue surrounding the solar industry in a fair and balanced way.

In a very small way, this letter to the editor makes the point we have been trying to make all along since we started writing this blog on February 26, 2009:

We would all be better off if we understood 2 basic concepts of freedom in our American Democratic Republic:

1) Be civil in your discourse with others, and
2) Everyone doesn't have to agree with you every time you speak in order to come to some common agreement down the road

We don't live on an island all by ourselves. We don't even live on an island where everyone else is of the same race and worships the same god or idol as in many to most civilizations that have existed in history. Those places make it far easier to come to some agreed-upon social standards on which to operate a country where millions of people live and eat and work every day.

We live in a land where the over-arching principle that was established by our Founders in 1775, first by declaring their independence from England and then in 1789 when they ratified the Constitution, was and still is 'freedom'. No other single word encapsulates their basic underlying principle under which they hoped Americans would live forever.

Or for 'as long as we could keep it', as Benjamin Franklin told Mrs. Powel right after he signed the Constitution.

Once we can all agree that the basic underlying principle of being an American is 'freedom', then we can start to talk about our differences and disagreements in an entirely different light, can't we?

Those differences don't make either person 'stupid' or 'wrong'. It means they have different ways of looking at the world and have different understandings and interpretations of economics, human nature and religious belief.

It is a tricky business. Which brings us back to civil discourse once again.

Have you ever bought anything from a sales person or businessman who said you were dumb? Of course not. The first order of business in any transaction is to have the customer like you to begin with. If you insult them or hate them in any way, you can forget having their business for very long, that is for sure.

One reason why many thoughtful and well-meaning and educated people we know are so turned off to the global climate change issue is not because they deny there might be an issue with our planet heating up but because the proponents of climate change legislation are so demeaning and dismissive of anyone who dares to challenge them on, well, anything relating to the environment.

'It is settled science and that is all there is to it!' claim many climate change politicians and advocates. Some politicians have suggested that it is somehow 'treasonous' to express any doubt about the claims of some climate change activists and somehow people should be prosecuted for doing so.

Well, the sun used to revolve around the earth and that was 'settled science' (at least as determined by the Catholic Church at the time) until some brave people such as Copernicus and Galileo pointed out that the earth revolved around the sun. And almost were burned at the stake for doing so.

How refreshing it is to read something such as Professor Eckerlin's letter to the editor who has taken the time to be objective about his area of expertise and make balanced arguments that see the merits of not only his side (advocacy of solar power) but that of opponents to solar power (cost, government subsidies).

Maybe this man should run for Congress. We need men and women who know what they are talking about in terms of serious subject matter (outside of pure campaigning and politics) but who can seek to persuade people to come to some common sense conclusion through the power of facts and pure reason.

We don't have time to go through every contentious issue we face in America but the same sort of level-headed leadership and articulation of ideas and principles could apply to any of them we have today:


The days of ad hominem attacks and trivialization of important issues have gotten us absolutely nowhere over the past 15 years of American politics. We have become as polarized in American politics as perhaps since before the Civil War, except then, we were 'polarized' over huge contentious issues such as slavery and states rights.

Today? You see flash media polls on whether you support Bruce Jenner's decision to become a woman being used as some indicator of whether the national electorate is blue, red or purple. Hardly an issue of the utmost greatest national importance right now, yes?

You want to 'win' on any political issue or debate? Start by trying to be nice and win some friends first on the other side. Over time, you can present as much information and data as you want but if you don't deliver it in a somewhat winsome manner, leavened with humor as Ronald Reagan and Winston Churchill did so well, you will probably never get a majority of people to agree with you and get something passed to your liking.

You also might want to learn how to disagree in a not-so-disagreeable manner yourself. There are two sides to every debate, you know, and your response to a point of view opposite to yours says a lot about you and your confidence in your stance on the issue. (*see ad hominem attack below)

More reasoned rational civil discourse such as this from Professor Eckerlin with thoughtful examination of facts and figures and less listening to talk radio/cable hosts such as Sean Hannity, Chris Matthews, Rachel Maddow and Rush Limbaugh might be a good way to start.

Use your own brain to think about these big issues. Not theirs.

And then seek to persuade them to some accommodation of your ideas without beating them over the head with a club or calling them a 'bigot', 'racist' or 'idiot' for a change.

* We have found over the years that when people run out of ammunition in the form of facts and supporting data, i.e. 'proof', they resort to insulting the other party and calling them names and denigrating their abilities, etc. Most times these are very small people of limited integrity who are not really worthy of engaging in further debate but rather being dismissed as politely as possible and possibly pitied.

Or as Mark Twain once said: 'Never argue with stupid people. They will drag you down and beat you to death with experience'.