As hard as it is to believe, we recently received some information about 'retiring early' to receive Social Security benefits.

How can that possibly be? It seems like just yesterday we were running for Congress in 1984 talking about reforming Social Security and setting up individual retirement accounts for everyone.

A senior political advisor took me aside one day and said: 'You have to stop talking about reforming Social Security! You are scaring the hell out of the other Republican candidates on the ballot!'

'But it has to be done!' I responded in an exasperated youthful idealistic impatient impudent manner.

'We all know that it has to be changed!' the senior advisor said. 'We just don't want to talk about it in THIS campaign!'

Therein lies the problem. That was 31 years ago in 1984. Today it is 2015, heading into the 2016 presidential election cycle. Nothing has changed. Nothing has been improved. Both SS and Medicare are headed towards technical and actual insolvency based on past legislation about who pays what into each 'trust fund' (sic) and who receives benefits from each 'trust fund'.

There is NEVER going to be the perfect time to talk about reforming Social Security and Medicare in America. Not with 44 million+ senior citizens receiving checks and benefits every month from both monstrous entitlement programs. Who vote every election. State, local and federal. Even in off-off year primaries.

Maybe the tactics of Social Security reformers in the past has been all wrong. Instead of talking about 'preserving and protecting Social Security', maybe it is time to start appealing to the inner desires of every single human being, rich, poor and neither rich nor poor but middle-income, especially those of you who are under the age of 30 right now and ask this basic visceral question:

'How would you like to retire rich and wealthy through the magic of compound interest and with very little work on your own?'

Who could possibly say 'NO!' to that one? Everyone wants to do well on their own and provide for themselves and their families, don't they?

Any political party that can adequately market this to the younger cohorts of American voters, and then get them sufficiently motivated to vote consistently mostly on the issue of reforming Social Security to their personal benefit , will certainly dominate for the foreseeable future.

Here's the problem in a nutshell:


Guess what? If you die before you reach the SS full retirement age of 66 today (which is heading up to 67 in a few years so get prepared for it), you get bupkis, nothing, nada from Social Security. Hasta la vista and too bad for you and all that.

It doesn't have to be that way. For any American, black, white, Asian, Hispanic, rich, poor or otherwise.

Now that we are faced with the reality of looking at such things as receiving Social Security (?) checks on an early basis, the stark facts of the lack of reform for the past 35 years are becoming glaringly self-evident.

The thought of Warren Buffett or Bill Gates receiving a monthly SS check of $2600 is almost too ridiculous to believe. They don't need it and they shouldn't be counted as an 'entitled' recipient just because they reach the golden retirement age.

If you think you are going to be making it big off of Social Security when you retire, think again. You are not.

The real tragedy of American politicians and voters not supporting a rational improvement to Social Security 35 years ago or longer means that most American seniors are going to receive close to a 'minimum wage retirement' instead of the amount of wealth they could have amassed had they been able to put the same amount of Social Security payroll taxes into a bonafide individual retirement account over the past 3.5 decades.

It is difficult but not impossible for a minimum wage worker for the entirety of their working life (only 2% of the people who start at the minimum wage stay at that level for the long-term) to build up a $1 million nest egg to retire on at age 65. (see How to Become a Millionaire on Minimum Wage)

If you don't want to retire with a $1 million+ nest egg and you want to make sure everyone retires at the lowest amount of monthly income possible and you are under the age of 30, just keep voting for people who promise to 'never touch Social Security!'....and you will achieve your goal.


The real shame of it is that with a private individual retirement account such as the one described above, everyone could have a decent retirement fund on which to retire PLUS, they could pass it along to their heirs AT ANY AGE THEY PASS AWAY, NOT JUST AFTER AGE 66!

This would be especially important to African-American males whose life expectancy today is about age 68 versus their white counterparts who live on average 77 years. 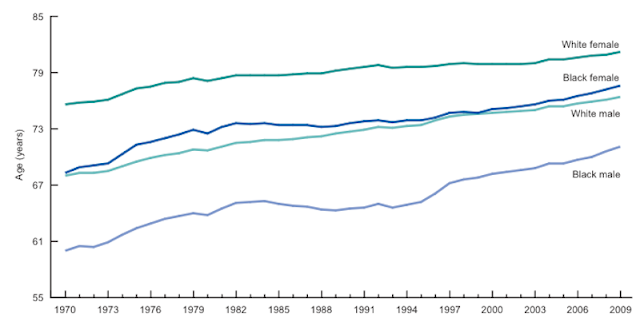 If an African-American male pays into Social Security their entire working lives and dies 1 minute before midnight before their 66th birthday this year, he won't receive back any Social Security benefit.  His family will not inherit any of the accrued value of his Social Security 'contributions' (sic) (i.e. again 'payroll taxes') built up over the previous 45 years of hard work and forced taxation under the current system.

How fair is that?

Think about that the next time you think defending the status quo in Social Security is 'the right thing to do'. We most likely have created one of the most unfair ways to hold people and families back imaginable in America by not updating and modernizing Social Security over the years.

It is like we are still driving our grandparents' 1935 Ford instead of a modern-day Prius or Tesla. You wouldn't do that either, would you? So why are you still supporting the old version of Social Security when there are more modern ways of providing for income security for our nation's seniors going forward?