We were listening to the radio this past week when CBO Director Douglas Elmendorf was being interviewed by a PBS business reporter.

'We write our reports for the benefit of Members of the US Congress and US Senate and their staff.'

Sadly, most Members of Congress, Senate and their staff do not read any of the CBO reports. They rely on the press clips from the journalists who don't read the CBO reports cover-to-cover either and just report the highlights of the synopsis handed out to them by the CBO press office.

A few think tanks have young staffers who are hired to do what the older guys and gals are tired of doing, that is, plow through the CBO reports to come up with some nugget that will support their opinion or their slant on political life in America.

So the only people in the United States of America who are regularly told to read CBO reports are you, the loyal Telemachus Reader, now in our fifth year, as hard as that is for everyone to believe, us included.

We will share 5 more CBO nuggets with you this week, one after the other, so we apologize in advance for you getting an email every day of the upcoming week.

We think these infographics outline the particulars of the federal budget in as simple of a way as is humanly possible without ignoring the complexities and nuances of having to deal with a $3.5 trillion annual budget in the first place, the largest budget of any human endeavor in history on this planet.

We will provide some commentary to accompany each slide but we trust that you will study them and get back to us with any questions or comments you might have after your in-depth review of each.

In the aftermath of the rollout of Obamacare, the VA hospital scandal and now the Bergdahl trade for Taliban terrorists, we think it is a good time to re-orient ourselves to what is really the most important thing we elect people to do, besides keeping us safe from the very killers President Obama has just released back into the wild, that is:


Spend our tax money wisely, prudently and in a conservative manner to keep us from going into financial and fiscal ruin as perhaps thousands of past civilizations have done in history.


(These infographics can all be downloaded directly from the CBO website http://www.cbo.gov/publication/45278) 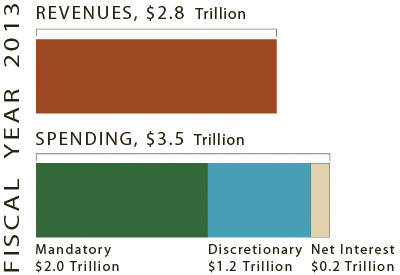 There can be nothing more simple than this graphic to explain where we are in our federal budget today.

No matter how much we try to tax everyone and every activity known to mankind, we just can't seem to raise enough money to cover all the commitments that past and present politicians have made to various constituent groups in America, the largest of which are the retired seniors.

As Obamacare takes full root in the American political and governmental landscape, it too will take its place beside these 3 Giants of American Federal Taxpayer Spending.  Obamacare will help drive mandatory spending up to the point where mandatory spending plus defense spending plus spending on net interest on the national debt will exceed 100% of all the available incoming revenue to the US Treasury and then some.

Those lines should cross not long after 2020, a short 6 years from now.

Whenever you hear anyone, including candidates from your district and state this year running for Congress and the US Senate, talk about 'balancing the budget', ask them this one simple question:

'What are you gonna do about the growth in spending in entitlements?'

If they say 'Nothing!' or sound like Elwood Blues singing nonsense like he did on 'Rubber Biscuit', then don't vote for them. And then run for that seat the next time around yourself.

Cause they really don't know what the heck is going on.