This is our final installment on the great CBO Infographics series, one which several of you have commented on how helpful it has been to get your head and hands around the US Federal Budget.

One of the craziest, most frustrating, slippery salamanders you will ever try to grab ahold of: The US Federal Budget.

But grab it and understand it you must. Because without a pretty good understanding of what this CBO Infographics Series has presented, we will not make a lot of progress towards solving our budget/fiscal problems.

We need you to be an active participant in this thing called participatory democracy, perhaps as a candidate yourself, perhaps as a behind-the-scenes worker but especially as a concerned registered voter who can put pressure on your elected officials to 'do the right thing' and do it regularly.

Today, we take a look at the 'Discretionary' part of the Federal Budget which is nothing more than the 'Guns versus Butter' part of the budget before there were such things as entitlements which got birthed in a big way in 1965 with the passage of the Medicare and Medicaid Acts.

We have already pretty much clearly established that the main cause of our budget imbalance over the past 30 years has been the exorbitant rise in health care costs which have driven Medicare and Medicaid from relatively minor programs in the 60's to well over 23% of entire federal budget today.

If we could curtail the cost in medical inflation and hold it to around the general rate of inflation in the general economy, we will return to balanced budgets rather quickly, assuming we ever return to any sort of 'normal' rates of growth which creates millions of new jobs one day.

That being said, we are going to make another bold statement that some people may not like:


'Discretionary Programs are not the main problems in the federal budget!'

We can already hear the people who hate foreign aid say: 'If we just could get rid of fereign aid, we would balance the budget.' ($47 billion, less than 1.3% of the federal budget per year)

We hate to disappoint those folks but nothing in the discretionary side of the budget is directly causing the fiscal imbalance between revenues and spending as much as the two main federal health care programs. That has been the case for the past 2 decades or more.

'Hey! What are you, an ignoramus?' we can also already hear some people say. 'What about the trillion dollars we blew in Afghanistan and Iraq on two wars that now seem to be for naught given the ISIS invasion of Iraq? We could have saved that $1 trillion in spending and not added that to our huge national debt, right?'

To some extent, that is true. We could have saved $1 trillion in spending had we not invaded both Afghanistan and Iraq. However, from 2001 to 2014, we have added on at least $8.6 trillion of new debt held by the public. $1 trillion spent on the 2 wars accounts for 11.6% of that additional debt, hardly the main reason why the debt has exploded over the past 14 years.

We endured a major recession, one far greater than anyone thought we were going to endure, which contributed to the debt buildup, that is a given. The Bush tax cuts which Obama extended forever (so now they will be forever remembered as the Bush/Obama Tax Cuts?) also took away perhaps $1 trillion of revenue stream from the federal treasury which added to the budget deficits over the years.

However, take a close look at the graphs below. Keep in mind that in budgeting circles, the mantra is:

'Control what you can which is spending. Plan ahead for ups-and-downs in the economy and tax revenues to smooth out those fluctuations. Balance the budget with prudence and foresight, not ignorance and hindsight'

Defense spending has hovered at or below 4.3% of GDP since 1993. The low for defense spending was 3.0% of GDP in 1998 after the 1st Gulf War (apparently people knew we would be going back because that is what people called it at the time)

Compare both to the Medicare/Medicaid programs, both of which more than doubled their size in terms of share of GDP in only 20 years. Both are expected to continue that growth over the next 20 years as well.

We can't control tax revenues; they are subject to the economy and the basic 'animal spirits' that drive people to work and invest when they see an opportunity to make a profit. They stop doing so when they don't see a favorable return on that investment and hard work.

We can fight all we want about 'fereign aid', the Department of Education and 'The Bridge to Nowhere'. Those are all legitimate debates about the proper role of government in our lives.

We happen to believe that: 1) as long as a program is open to everyone and benefits the entire nation as a whole; 2) fits into a reasonable interpretation of the Constitution which pretty clearly establishes a twin-government rule for our nation, one federal and the other state-directed, and 3) gets passed by 50%+1 of both the House and Senate and is signed into law by the President in a White House ceremony, that is a 'legitimate' federal program.

Because discretionary programs are not contributing significantly to our explosive debt, or the deficits that cause that debt, or the interest rate time bomb that will truly explode once interest rates return to 'just normal' rates in the not-too-distant future, we don't worry about them as much as we do about the federal healthcare entitlement programs.

We can control discretionary programs. We can eliminate them all if we had a Congress that wanted to do so and a public to support it. We just ask that at the end of the year, the budget is balanced and no more debt is issued to finance current consumption.

Certain public works projects we support. The Erie Canal, for example, led to a tripling! of the US GDP in the 7 years after it opened and trade from the Midwest flowed through its channels to New York and beyond. The Interstate Highway System is another. It says we can build roads in the Constitution, doesn't it?

What scares us to death is the proclivity of Congress to not only NOT control spending in our national entitlement programs but to constantly ADD ON to them! Obamacare, for one is so expensive and complicated that the CBO recently said they could not even score just how much it was going to ultimately cost!

How crazy and loony is that?

The clear and present danger to any government of any style or persuasion is its inability to restrain itself from trying to spend more of your money on government programs to attract votes and stay in office. That inability inevitably leads to imbalanced budgets and deficits which means more money has to be borrowed to pay for them.

Once the level of debt gets so high that the credit markets start to believe the government can't make their scheduled interest payments on time, the currency starts to implode...and then it is just a race between more inflation and higher interest rates to attract more money to pay off the debt.

Maybe the United States of America will never get to that point. Let's hope we won't. But just be forewarned that hundreds, if not thousands of republics, democracies, dictatorships and communist states have fallen prey to hyperinflation and depression of their currency over the past 800 years of recorded human history.

That is not a good track record. So why take a chance?

Discretionary programs will not be the prime reason why we get to that point if we do.

Entitlement programs will be.

That, hopefully, will be the main lesson of all 5 of these simply terrific CBO Infographics.

Share them all with your friends and neighbors. And people you don't even know. 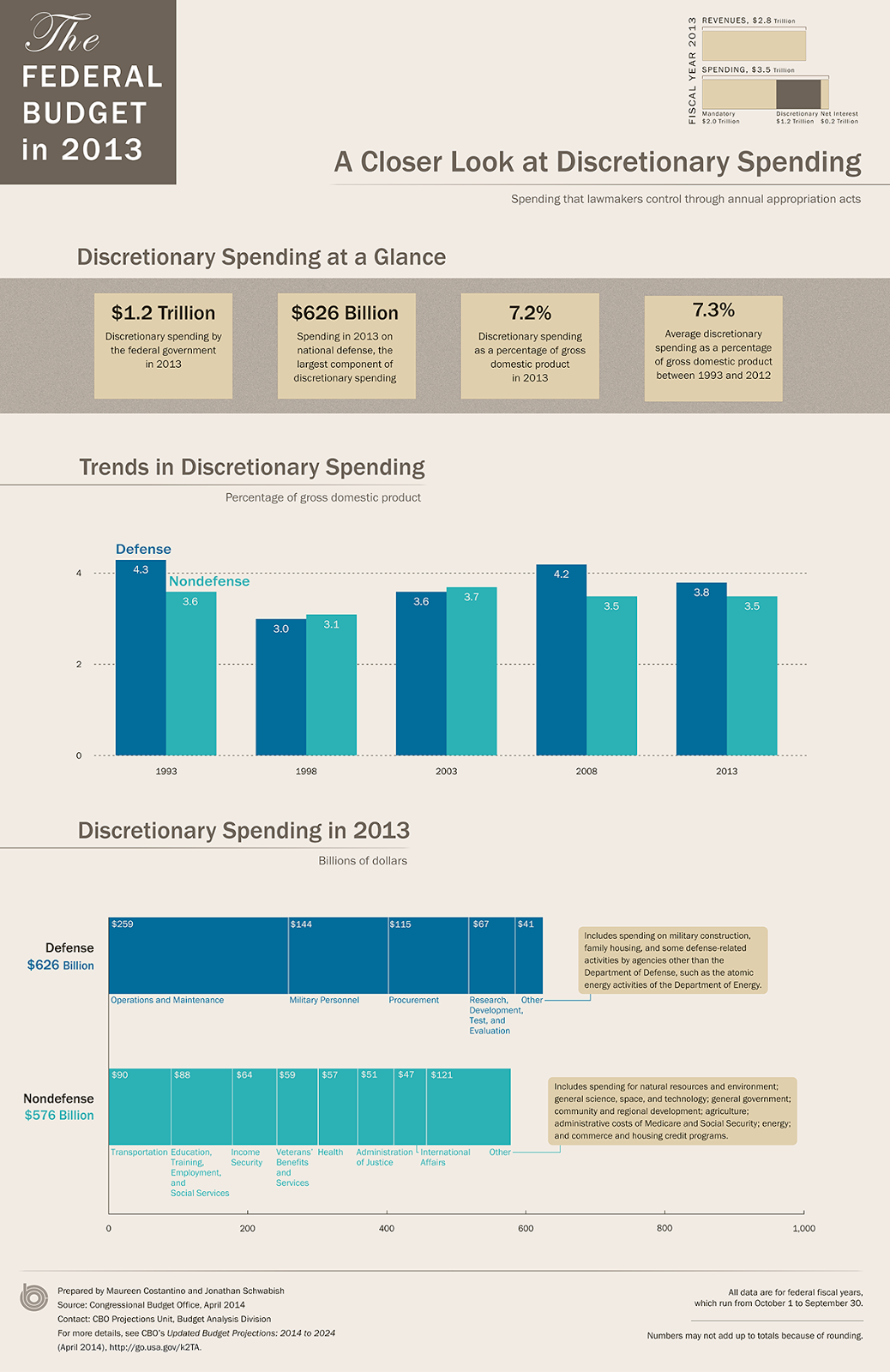