''Don't Wait For A Fried Chicken To Fly Into Your Mouth!'

'If God did not bless, not one hair, not a solitary wisp of straw, would grow; but there would be an end of everything.


At the same time God wants me to take this stance: I would have nothing whatever if I did not plow and sow.

God does not want to have success come without work, and yet I am not to achieve it by my work.

He does not want me to sit at home, to loaf, to commit matters to God, and to wait till a fried chicken flies into my mouth.

That would be tempting God.'

The great German theologian Martin Luther wrote this sometime between 1517 and his death in 1546 and probably used it multitudinous times in sermons and letters. 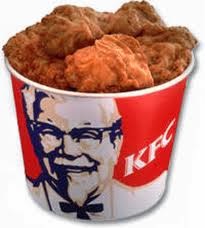 During the same time he was helping to upheave the entire world Catholic structure with his doctrine of salvation by faith, not by works; his posting of the 95 Theses on the front door of All Saint's Church at Wittenberg on All Hallow's Eve, 1517, (Halloween, no less) and the Reformation of the Church which became the Protestant Movement that we know today as the Baptists, Methodists, Presbyterians and every other denomination you know.

Martin Luther...did a lot in his lifetime, wouldn't you agree?

Who knew the Germans liked fried chicken as much as Americans do today? Doubt it was as calorie-laden as the modern-day KFC or Bojangles chicken we scarf up each day. Still, the image of a 'fried chicken' flying into our mouth without any work on our own to get it there is as far-fetched today as it was in Luther's time apparently.

As simple as this concept is, it is full of application to many things in our lives today. Namely the importance of 'work' to achieve anything in this life; career, avocation, church evangelism and yes, even the sordid world of American politics.

Just take a look at what it takes to get a 'fried chicken' into your mouth either in Luther's day or today in a fast-food drive-through joint. Someone has to breed the chickens so the very best eggs are fertilized and then hatched. Young poults have to be nurtured, fed and raised and then taken to be processed for human consumption by plucking, washing and quartering. Then they have to be cooked the right way or else we might die of e-coli poisoning.

In no way will any young poult just grow up on its own; dress itself to be cooked in hot frying oil and then fly right into your mouth sitting on the couch so you can say: 'The Lord is good. He provided a fried chicken right into my mouth so I can sit here and do nothing about anything all day long!'

It has often been said of modernity: 'We don't know the value of work anymore!'; 'We are so impatient!' and 'Getting up to turn the channel on the TV like we did in the '60's is considered so incredibly ancient nowadays!'

It is true. We are a 'want it/got to have it now' society. Hard to see how that is going to change with every new invention making our lives more comfortable and easy, not harder and more difficult.

Let's take the 'hard work' of American politics and apply Luther's measure of 'faith versus work' to it and see how we stand up today:

Much of the exasperation over the recent shutdown of the government came because Obamacare seemed to be such a disaster coming down the road. Based on the fact that we are part of the 16 million people now expected to lose their health insurance, even though President Obama 'promised' we 'could keep it if we wanted to' (his words, not ours), we agree that Obamacare is not going to work and needs to be replaced.

But how would theologian Martin Luther counsel us if we were to enter his monastery for consultation on what to do next?

We think he would be pretty direct and to the point. After all, he was a red-headed, tempestuous, hard-headed and dynamic thinker, speaker and leader so he probably would not pull any punches in our short time with him:


'Listen. Just because you think you are right on Obamacare doesn't mean you are going to win every time you say something about it. It takes time to overturn the existing hierarchy and monolithic powers-that-be.

Heckfire! Not only did the Vatican disagree with me when I posted the 95 Theses, they tried me and tried to burn me at the stake for heresy! Have you been similarly threatened lately with bodily harm or death on a burning pyre? Call me when you have been so threatened so we can feel sorry for each other.  Then you will know what it is like to be truly aggrieved and persecuted for your beliefs.

I have been studying up on the American democratic republican form of government and all I can tell you is this: 'I wish I lived in the United States of America where dissent is not only free but encouraged! That sure would have made my life a lot simpler, I can tell you that!

My very strong suggestion to you is this: do what I did and go talk to people in every corner of the nation. Use reason and diplomacy to persuade people to join you in your fight against tyranny and oppression. Put forth a very clear set of principles and goals that detail how you would fundamentally change America if they would vote you and your friends into elective office from local to state to federal office.

And then, go out and work your butts off organizing, advocating, proselytizing and getting people to the polls in 2014, 2016, 2018 and 2020 and every other year beyond to make sure you win and don't lose ever again.

Democracy is hard work. Get used to it.

It took me close to 30 years to challenge the Catholic Church. When I died, we had only started to see the very tip of the iceberg of the Catholic monopoly being melted. Are you willing to put in at least 30 years of dawn-to-dusk hard work every single day to achieve your purposes or are you going to sit on the couch with a remote in your hand waiting for a fried chicken to fly into your mouth?'

It is going to take your daily involved time, effort and money if you ever want to change the direction of this country, he might also add. Obamacare is just the tip of the iceberg for us and the next generation; we have already saddled them with the simply impossible task of paying for the enormous entitlements we in the Baby Boom Generation are going to consume through Social Security and Medicare alone in the next 25 years.

Martin Luther was a brave soul, no doubt about it. Here's his closing argument to the Bishops who were interrogating him and subsequently sentenced him to death which he somehow avoided, no doubt with the help of God.


'Unless I am convinced by the testimony of the Scriptures or by clear reason (for I do not trust either in the pope or in councils alone, since it is well known that they have often erred and contradicted themselves), I am bound by the Scriptures I have quoted and my conscience is captive to the Word of God. I cannot and will not recant anything, since it is neither safe nor right to go against conscience. May God help me. Amen.'

Martin Luther didn't take things sitting down in case you haven't noticed yet. Nor did he ever quit and shut up and sit down in a corner and sulk. He used his amazing theological mind and reason with his forceful writing and oratorical skills to not only change a nation (Germany) but the entire world in many ways.

Thomas Jefferson, James Madison, George Mason...those were the kind of guys who didn't wait around for a fried chicken to fly into their mouths either. Which are you: a 'fried-chicken-fly-into-my-mouth' sort of person or a person willing to do the work to get the fried chicken to the plate in the first place for the rest of us down the road?