A Joe Namath Guarantee: CBO Says Obamacare Is Going To Cost A Lot More Than You Think!' 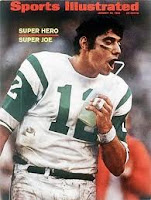 This sobering report is from Chuck Blahous, a good friend of ours who worked in Senator Alan Simpson's office, the 1994 Entitlement and Tax Reform Commission set up by President Bill Clinton, the Bush White House on Social Security and entitlement reform and is now a Trustee on the Social Security/Medicare Committee.

Chuck Blahous is a 'big brain' and he has 'been there/done that' when so many casual observers and yappers on TV, quite honestly, 'haven't'.

That is just the plain truth.

He knows what he is talking about.

Would you rather hear some color commentator who never played quarterback in the NFL talk about the game....or have a beer or two with 'Broadway Joe' Willie Namath from the 1969 New York Jets talk about how he 'guaranteed victory' in the Super Bowl against the vastly favored Baltimore Colts...and won 16-7?

Chuck Blahous is 'Joe Willie Namath' when it comes to SS, Medicare and health care 'reform' (sic) and everyone else is Howard Cosell and Marv Albert...or worse.

See if you don't agree:

The Congressional Budget Office (CBO) has just published, in two reports, its updated score of the 2010 health care law. The new score is bad news from almost any vantage point.

CBO’s fiscal evaluation of the law is worse than before, even though the number of people receiving health insurance coverage is now projected to be fewer.

CBO now finds that relative to the baseline the health law reduces deficits by $65 billion through 2021. This is barely half as good as the $123 billion anticipated last year. (See graphs at link). This scoring compares legislation with a hypothetical budget baseline scenario rather than to actual alternative law.

Relative to actual prior law, the 2010 law has caused a fiscal worsening. CBO’s latest update suggests that the worsening is still at least $340 billion through 2021, though a precise estimate cannot be made without additional detail on how the law’s Medicare savings would be allocated between its trust funds.

Some news reports say that the latest CBO score finds lower costs for the law as a whole.

That is not how I read CBO’s latest reports.

The press appears to be seizing on CBO’s having reduced the projected cost of one particular set of provisions of the law (the coverage provisions). But CBO’s assessment of the total cost of the law has gone up, in part because estimates of other provisions’ cost savings have been reduced.

Once again, this is simply the number resulting under the scorekeeping convention. In comparison with actual prior law, the cost increase is much higher. My study based on 2011 projections previously estimated that federal outlays would increase by over $1.15 trillion through 2021. CBO’s latest report suggests this should be increased to between $1.19 and $1.2 trillion.

One thing there is no disagreement about is that costs per covered individual under the law have gone up.

Compared with CBO’s 2011 projections for 2021, CBO now projects that 3 million fewer people will have coverage under the law. This is in large part because it now sees 11 million being covered under Medicaid (as opposed to the 18 million projected last year). Some but not all of this reduced Medicaid participation would be made up by greater participation in the exchanges. For the law to now be expected to cover fewer people while having a worsened financial impact is clearly bad news.

CBO takes pains to stress the uncertainty of these projections. Somewhat ominously, CBO recognizes a point that I previously made: “some states will probably seek to implement a partial expansion of Medicaid eligibility to 100 percent of the FPL, because, under the ACA, people below that threshold will not be eligible for subsidies in the insurance exchanges while people above that threshold will be. . .”

Quite so. If many or most states go that route, the fiscal worsening under the law may well be worse than the $340 billion over the next ten years that one derives from the CBO projections.

Once again, the latest CBO update shows worsened finances for the 2010 health care law, despite the use of assumptions regarding state behavior that make the projections more fiscally optimistic.

Using the scoring convention that shined such a flattering light on the law at the time of its original passage, the law now looks less favorable.

Total costs for the law, despite the first day’s press reports, are now somewhat higher.

These findings arise despite a decrease in the number of projected insured.

And we should still expect the legislation to add over $340 billion to deficits during the next ten years, and more beyond, relative to actual prior law.

All in all, CBO’s latest is another sobering report on the fiscal consequences of the health care law.'

Email ThisBlogThis!Share to TwitterShare to FacebookShare to Pinterest
Labels: #Obamacare