Yikes! As A Matter of Fact, You DID Build (Those Roads and Bridges!) 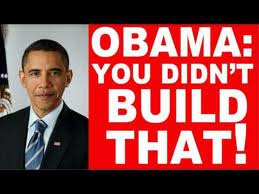 President Obama sure stirred up the hornet's nest last week when he told a small business group in Roanoke, Virginia:


'If you've got a business, you didn't build that!'


What would you think he was talking about if you had nothing other than those 9 words to read?


The statement came across to many as further evidence that the President is hostile to the private sector, profits and the whole free enterprise system.


That one single statement, coupled with his stated incessant desire over the past 3.6 years to 'raise taxes on the wealthy'; 'make them pay their 'fair share' (whatever that is...someone please give us an exact number or percentage of income that can truly be considered 'fair') and his propensity to regulate everything under the sun in America sure seems like 'proof' to any reasonable observer, doesn't it?


To be fair about it, here is the exact transcript of what he said in its entirety:


"There are a lot of wealthy, successful Americans who agree with me (one person exactly, Warren Buffett, our insert)-- because they want to give something back. They know they didn’t -- look, if you’ve been successful, you didn’t get there on your own.

You didn’t get there on your own. I’m always struck by people who think, well, it must be because I was just so smart. There are a lot of smart people out there. It must be because I worked harder than everybody else. Let me tell you something -- there are a whole bunch of hardworking people out there. "If you were successful, somebody along the line gave you some help. There was a great teacher somewhere in your life. Somebody helped to create this unbelievable American system that we have that allowed you to thrive. Somebody invested in roads and bridges.

If you’ve got a business -- you didn’t build that. Somebody else made that happen.

The point is, is that when we succeed, we succeed because of our individual initiative, but also because we do things together. There are some things, just like fighting fires, we don’t do on our own. I mean, imagine if everybody had their own fire service. That would be a hard way to organize fighting fires. "So we say to ourselves, ever since the founding of this country, you know what, there are some things we do better together. That’s how we funded the G.I. Bill. That’s how we created the middle class. That’s how we built the Golden Gate Bridge or the Hoover Dam.

That’s how we invented the Internet. That’s how we sent a man to the moon. We rise or fall together as one nation and as one people, and that’s the reason I’m running for President -- because I still believe in that idea. You’re not on your own, we’re in this together."

We can see where he 'said':  'If you have got a business, you didn't build that'.  It is right there in the transcript for all the world to see.

Either President Obama's teleprompter went out-of-whack and he went off on a bad tangent ad-libbing or he has a very bad and probably now-fired speechwriter.

But to be entirely charitable, even though the fun thing to do would be to pile on in this political season, we will at least acknowledge that the President might have been referring to the fact that each individual business person did not build all the roads and bridges and the Internet on their own.


Which is sorta true.  But not entirely.


We think The President has bungled his own 19th century robber-baron populist attack on the job creators with this line of attack.  And he probably should stop it and cease and desist unless he wants to make a total mockery of himself in the business community at least.

The people who paid for the roads, the bridges, the internet and DARPA with their hard-earned money through taxes paid to the government ARE THE VERY SAME PEOPLE WHO TAKE RISKS AND PAY THE MAJORITY OF TAXES IN THE FIRST PLACE!


Holy cow! Do we want these same people to do everything in this nation?


Let's look at the facts:


The top 1% of the income-earners in America pay 37% of all the federal income taxes.  That includes LeBron James, Tiger Woods, Michael Jordan...and you if you are making around $200,000 per year.


On top of that, corporations paid roughly 6% of all federal tax revenues last year. Before they distributed interest and dividend payments where they were taxed again at the individual level.


Thomas Jefferson wrote about how the 'fairest' tax system would tax income derived from individual hard work and risk-taking investment only once and one time and one time only.  Which is why the consumption tax as a replacement to every tax in this nation seems to us to be the most American of tax regimens to implement.


Soon.  As in the next Congress under a new President.  President Obama would never go for it.


For the most part, these upper-income people are the very same 'company-creators' who also hire the vast majority of the 'rest of us' to work for them.  They pay us a weekly or monthly salary and our benefits such as health care, pensions or match your contributions to your 401(k) plan.


The same people President Obama was talking to in Roanoke last week.


So, in essence, the President and his handlers might have outsmarted themselves with this class warfare attack angle they are trying to use to divert attention from the abysmal economic record of this Administration, the worst coming out of a recession in modern American history.


The fact is:  'If you are a business owner, and are in the top 25% of income-earners in America today, yes, in fact, you DID pay for these roads and bridges and the Internet to be built with your hard-earned tax dollars you have sent over the years to Washington. DC!


If you didn't pay any federal income tax over the past 20 years, you did not pay one dime to support, well, anything we all take for granted in a free society such as ours.  Nothing for the common defense, nothing for education, welfare, agriculture programs, environmental protection, roads, bridges or the Internet.


The people who paid all of the federal income taxes did all these things for us.  Gas taxes stopped fully funding road projects years ago.  General taxpayer funds have been used to fill that gap to close to 50% of the expense today, perhaps more in this recession.


Higher-income taxpayers pay for our infrastructure for the most part, plus the kind and benevolent (and somewhat crazy, we have to believe) Chinese government who lent us roughly 30 cents on every dollar we spent on such things as infrastructure plus Social Security and Medicare (money is fungible) over the last 2 decades.


Our suggestion to the President and his handlers is to drop this silly attack on the American free enterprise system and the 'stars' of that show, the American entrepreneur and businessmen and women.


When he attacks the job creators and the business people on which our entire economy stands, he misses the mark and appears childish and out-of-touch.  In this case, he is simply wrong.