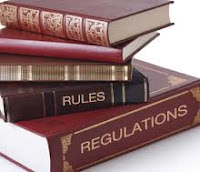 Yes ma'am.  You heard that 'torectly as they say (sometimes) in the South.

This is why this current 'debate' (mid-slinging) by the Obama Administration over 'out-sourcing' and 'Bain Capital' is so maddening, mind-numbing and quite honestly, 'dishonest'.

If you have ever wondered why so many US corporations have fled to set up shop overseas over these past 30 years, look no further than this astounding fact:


We have become #1 in the World in passing more regulations and legislation!

Wonder if there is an Olympic Gold Medal in London for 'Shooting Your Nose Off to Spite Your Face'?

The United States of America will lead the gold medal count hands-down.

Once American businessmen and women figured out that they could make products overseas and ship them back here for far less than it costs to make them domestically, the scene was set for a massive exportation of jobs overseas in the 1990's and early 21st century.

The National Association of Manufacturers (NAM) estimates that, totally aside from lower wage differentials overseas vis-a-vis the US, the excessive cost of regulation and government intervention in American free enterprise amounts to about 20% in extra costs.

20% is the difference between many American businesses shutting down their overseas operations and moving operations back to the States, even with a lower wage advantage in some Asian and South American countries.

Wouldn't you like to see business and jobs return to the US, particularly in the hard-hit Textile Belt where 250,000 textile jobs have just simply vanished over the past 15 years from North Carolina, South Carolina and Georgia?

Here's just one small regulatory issue on particulate matter that has driven cotton ginners and manufacturers particularly batty over the past decade as they are attempting to rebuild the textile industry in the South.

Do you understand all the math in this study?  Imagine you are a cotton farmer or ginner and all you want to do is grow great Southern cotton again here in the States and you have to deal with these sorts of regulations that really govern how much 'dust' can be expelled from the cotton gin factory.

They could shoot a beachball-sized load of cotton dust high into the air in these rural counties and the dust wouldn't fall on anything but the rabbits and chipmunks who live around their fields.

Plus his unbridled disdain for the American entrepreneur and business owner and operator is frustrating the very people who want to expand their business and hire more people.  What is so difficult to understand about that connection between the desire to make a profit and reasonable return on investment and job creation and growth?

We simply have become convinced over these past 3.6 years, sadly, that President Obama 'just doesn't get it' when it comes to economics, business, job creation and prosperity.

We think Mitt Romney does, mainly because of his extensive business experience prior to his public service as Governor of Massachusetts.

Here's another 'mind-blowing' stat for those of you who do not think America has enough 'rules' or 'laws' or 'regulations':


This is double the amount of tort claims in any other industrialized society on Planet Earth.


To the uninitiated or squeamish, 'tort' just means this:  'lawsuits'.  As in 'someone did something that caused injury to me and I want some financial recompense for their meanness/stupidity!'

Sometimes it is justified as when someone is physically harmed by a product or service through negligence or intent on the part of the perpetrator.

Sometimes it is not as when someone files a nuisance lawsuit with the full intention beforehand of not ever going to trial but rather to force 'some corporation with deep pockets' into settling prior to trial because the costs of settling would be far less than the extended costs of a trial and possible adverse outcome.

But when you add up the tort charges to the regulatory compliance charges on American free enterprise, it is kind of amazing that any business does well nowadays, isn't it?

Imagine just how 'well' American businesses could do if the yoke of the 20% excessive regulatory costs were thrown off each business and the cost of tort claims could be cut in half to 'only' 1% of GDP.  (That would still be $150 billion per year but that is better than $300 billion per year, right?)

You might even get re-hired at the same level of income and benefits you enjoyed before everything blew apart in 2008-09.  Perhaps.