250 Things That Just Are Not True 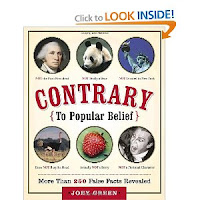 We saw a book recently, 'Contrary {To Popular Belief}' that pointed out the fallacy of 250 widely-held beliefs such as the 'fact' that a leap year occurs every 4 years (it doesn't occur in years not divisible by 4, 100 and 400, for some reason; 2100 A.D. for example, is not a leap year), the Earl of Sandwich 'invented' the 'sandwich' (he didn't) and 'Lucy in the Sky with Diamonds' was a song written by John Lennon to extol the virtues of LSD (it was based on a drawing by his 4-year old son, Sean, about his friend in pre-school named 'Lucy')

We also have been engaged in long-term, on-going conversations about weighty things such as 'who is a 'true' conservative or not; do tax cuts yield more tax revenues for the government and can government really 'create' any new jobs?

The misguided precepts, shibboleths and talismans held by ardent advocates on both sides in politics could fill a book the size of '2500 Things That Are Just Not True!' or about 10 times larger than the one we read at CVS.

Let us address just a few to start with on the Republican conservative side of things (don't worry...we will get to the liberal Democratic side of things soon enough):

'D'oh!'  We have empirical evidence now from the past 30 years that this 'just ain't so!', don't we?  We have had repeated tax cuts after tax cuts after tax cuts and the federal government has continued to expand almost without fail, even during the most recent crushing recession. NO federal program today is at an absolute lower level today than 3, 5 or 10 years ago.  Not one.  Check it out yourself and read the federal budget, all 2400+ pages of it on-line: Federal Budget

The reason why this has not worked is because advocates of unabashed tax cuts unpaired with any responsible spending reductions do not understand the following: 1) There is no federal balanced budget amendment that requires annual balanced budgets as in every state. 2) The Fed can and will print up money every single time Congress fails to balance the budget...which keeps spending at levels now almost 40% higher than tax receipts per year.

The 1990 budget agreement instituted the critical PAYGO budget mechanism that led directly to the balanced budgets from 1998-2001 trumpeted by Newt Gingrich as being something he did solely by himself (which is simply untrue). By the way, Speaker Gingrich vehemently opposed the 1990 agreement after he had a handshake agreement with President Bush 41 to support it.  So, truth be told, Mr. Gingrich had nothing to do with the institution of the 2 key elements of the budget process, PAYGO and the discretionary spending caps that actually led to a flattening out of federal expenditures during the 1990's as a result of his walking away from the deal.

Talk about 'integrity'!  Teddy Roosevelt once said of a political opponent:  'I could carve a better backbone out of a banana!'  You can choose your own fruit in this case.

You are not a 'communist' if you vote for a package of solid, bonafide and massive spending reductions that includes some tax revenue increases as a concession to the opposite party that controls now 2/3's of the federal government in Washington.  You are a 'constitutional pragmatist' in the vein of 'small government' advocates Thomas Jefferson and James Madison who care more about the future of this nation than your own personal political career.

The combined package of Clinton's tax hikes, the PAYGO budget mechanism and the discretionary budget caps from the 1990 Act, the dramatic reduction of interest rates because of the market view that the US was 'actually doing something profound' to reduce its budget deficits and the 1997 Budget Act all contributed to the explosion of jobs and the economy in the 1990's.  That, and the fact that the Internet Geniuses in the Silicon Valley were figuring out practical applications to what had previously had been primarily a defense-related communications backup system in the event of nuclear war.

So, where is the evidence supporting the contention that higher tax revenues always follow massive income tax rate cuts at the federal level? If massive tax cuts increased tax revenues considerably, we would see it as a higher percentage relative to GDP, wouldn't we?

Just the math of it is a brain-twister.  Cut taxes...and then more money will come in as tax revenues? That just doesn't stand to reason. That is like a business saying: 'Heck!  Why not cut our prices on our products across-the-board?'.  They might get a short-run bump up in revenues if they gain market share but if they don't, they are just cutting their own throats and will be in bankruptcy in no time flat.

We feel that the swelling of tax revenues to the federal coffers from 1983 to now can be more directly attributed to the 'Social Security Surplus' extracted in the form of SS payroll taxes that were hiked in the 1983 Save Social Security Act spearheaded by Alan Greenspan.  The chart clearly shows that the 'surplus' now accounts for close to 1.4% of GDP as of 2007, up from 0% in 1982, and represents about $225 billion per year now, even in these depressed economic times.

These are not 'new revenues' generated by any new tax cut.  These are flat-out tax revenues generated by higher tax rates in the form of payroll taxes instituted in 1983, plain and simple.  Without the higher 'SS Surplus' tax rates since 1983, the average percentage of federal tax revenues generated over the past 15-20 years relative to GDP would have dropped to about 16.5%-17%, and most assuredly would not be the 18-19% rate always referred to by national commentators, Republican candidates and their spinmeisters.

We 'get' the fact that in the early stages of an economic recovery, the prospect of lowered income taxes might motivate an existing business to expand its operations and hire more people which will yield higher tax revenues in the near-term for the larger companies.  However, to assert that 'lower taxes' stimulate entrepreneurs at the granular level is a bit preposterous, isn't it?

Do you really think that a young 17-year old Bill Gates in the 1970's actually was thinking about discounted cash flows and net present values of his future income stream relative to various personal and corporate income tax rates when he and his Microsoft-to-be compadres were hammering out computer code in Seattle, Washington?  They probably didn't make any money for the first 5 years or so of their enterprise so 'tax rate cuts' meant absolutely nothing to them or to any other visionary at the early stages of brilliance and creativity. Most entrepreneurs (French meaning 'undertake an enterprise combining labor and capital') invent something cause they love what they are doing and then it turns into something great down the road.

'Suppose you oppose any and all deals that includes any tax hike, tax exemption repeal, or moderation of any special tax rule benefit...to anyone.  You then have to, by definition, summarily reject any and all budget deals that also contains $1 of spending restraint going forward; $100 billion; $1 trillion or $10 trillion.'

'Who then will have produced a smaller, more fiscally responsible, 'conservative' 'small government' budget for the federal government, by definition, then in this situation?'

We rest our case.

Think for yourself, not based on what other people tell you to think.

Look at the results around you. Isn't it time we do something different?