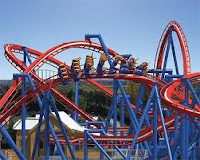 But we told you so.

The S&P downgrade of US debt securities for the first time in modern history last night is just the first step in the repercussions we will see from the profligacy of our American government for lo these many years.

The stock and bond markets will lurch about, perhaps wildly on Monday morning and probably throughout the rest of this summer as investors digest not only this 'bad news' but also the terrible news in Europe about how the EU is going to have to restructure their government spending and debt structures as well.

The chickens, and pigeons, always come home to roost when the piper has to be paid, to mix a few metaphors.

What will happen next?

We don't know. And neither does anyone else in the known world right now since this is uncharted territory to which your elected leaders from President Obama and President Bush to Congress for the past 10 years at least have led us.

These are problems caused by the blind fixation that we Americans can spend whatever we want to and not balance our books between revenues and expenses and make the tough public policy decisions on a regular basis to achieve that end.

As we have been warning for these past 2 years, the effects of running rampant budget deficits and incurring ridiculously high levels of debt during relative peacetime periods can cause real economic damage to all of us in the form of inflation, higher interest rates, depreciating value for the US dollar, all of which are far beyond the reach Congress to just 'legislate away' when they feel like it.

Such macroeconomic and international financial forces can make Congress and the US President look like insignificant pawns on the great chess game of world finance and stupid ones at that.  Our debt holders get to start making decisions that our elected leaders could have made long ago in terms of forcing us to finally reduce the upward cost spirals in our entitlement programs and especially in our federal health programs, Medicare and Medicaid.

This S&P 'downgrade' is not a 'mistake'.  We are surprised it has taken this long to get here.

Now, we are the first ones to wonder out loud:  'Why in the world would anyone listen to S&P, Moody's and Fitch rating agencies when they so blindly kept giving all of the major banks and financial institutions a 'clean bill of health' and Triple A+ ratings for their debt instruments including the deriatives that brought the economy to a grinding halt in 2008?'

Seriously.  Why these rating agencies are even still in business makes us wonder if even this downgrade to AA+ is a 'valid' rating made by a disinterested unbiased professional bystander. All of the ratings agencies were completely compromised by the fees they were paid by the banks and Wall Street such that they fell into the same human trap of greed and failed to do their jobs to fairly evaluate risk for the rest of us who continued to invest in Wachovia, Bank of America and Merrill Lynch like there was nothing wrong with them.

Maybe the 3 ratings agencies are receiving fees, indirect and direct, relating to the issuance of US bonds. Perhaps that is a prime reason why they have been so slow to issue this downgrade, we don't know. As President George H.W. Bush was prone to say: 'Wouldn't be prudent at this juncture to speculate.'

But something is rotten in Denmark and in Washington, DC. Don't let anyone try to explain this away as some 'aberration of statistical methodology' as White House defenders started to put out last night after the downgrade announcement.  This tepid downgrade finally 'proves' that something ain't right anymore.

One very simple suggestion: Seriously consider voting and working against any person who is now serving in Congress and and has been there since before 2000. They, of all of them, deserve the brunt of the blame for getting us into this fine mess we are now in simply because they 1) saw it coming; 2) did nothing to deal with it when we had time to deal with it and 3) have basically lied about the seriousness of the impact of their faulty decision-making.

We would like to say that perhaps every single Member of Congress now serving should be ousted next year in the 2012 elections along with President Obama in the White House who has failed to lead us in this time of crisis. George Washington, Abraham Lincoln, FDR, he is most definitely not, as much as people had hoped he would be a 'transformative' president.

The first ad you will see perhaps starting this fall running against his re-election?

'President Obama:  The First President to Preside Over A Debt Downgrade in American History! Is That Leadership You Can Trust?'

That is not good.

We have been telling people to get ready to run for Congress and all levels of government.  During times of economic upheavals are when the majority of incumbents get defeated by new people election after election after election cycle.  There were 13 new US senators and 93 new Congressmen elected to the 112th Congress that took the oath of office in January, 2011.

Only 3-4 more elections like that and the whole list of long-termers in Congress who are mainly responsible for this mess will be gone with the wind.

We just hope the new people on the block will have the guts to make the tough decisions to get our economic and fiscal houses back in order and back in order soon enough to avoid another downgrade to A+ and then B and then, well, it won't really matter after that point.

Stay tuned to the news this week and keep a defibrillator nearby and a glass of scotch and a tranquilizer gun. This is what we have signed up for by not addressing the seriousness of our budgetary problems for decades.
Posted by Frank Hill at 4:37 AM