The Sisyphean Illogic of Higher Taxes 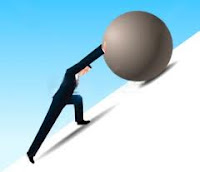 Now that S&P has fired a shot across the bow of the United States in terms of a debt downgrade, maybe it is time for the adults to show up in the room in Washington and dictate the next steps.

If there are any, that is.

We are unabashedly for lower spending for many reasons as we have expressed over these past two years but none is more important that this unassailable fact we know to be true because we have read the entire federal budget front-to-back and back-to-front and in its original Greek and Latin languages at least 4 times:

Not every single dollar spent by the federal government is a matter of life or death for someone.

In fact, we think that there are thousands of programs that could be eliminated, reduced or reformed to bring federal spending back down in line with the average tax revenue collection equal to 18.5% of GDP which has been the average for these past 40+ years.

That is what the ‘prime directive’ of Congress should be right now as Captain Kirk would say in the Star Trek series.

But there is more to the debate than meets the eye.

Currently, the Administration and President Obama are trotting out talking heads to claim that ‘tax rates and revenues are at their lowest point since the Eisenhower Adminstration’.

Well, we have just been through the most severe economic recession since the FDR Administration so that explains the level of tax collection hitting only 15% of GDP today.  People who are 'out-of-work' or significantly under-employed don't pay taxes at the levels they used to when fully employed.

And President Obama himself signed an extension of the Bush tax cuts that a completely Democratic Congress sent to him last December after the 2010 elections! So put those talking points away because they are simply ridiculous and too hard to believe given where they are coming from.

There is an inherent illogic to ‘raising taxes’ when no serious effort has been made yet to curtail spending that we want to focus on here first. Why raise taxes at all when we have not even started to clear out the underbrush of unnecessary spending in the federal government today?

It would be nice on the part of our President and the Democrat leaders in the Senate if they would be 'honest' about what they really want which is to play the same old tired political card that has been with us since time immemorial, 'class warfare', which they play solely for political purposes.

If they were totally 'honest' about it, they would just clearly state they want, in return for allowing budget cuts on entitlement, an 'acceleration of the expiration of the Bush tax cuts from 12/31/2012 to tomorrow morning'.

That is, in essence, what they really wanted in this last debt ceiling go-round.

Anything above that level, when taken into conjunction with the new taxes now in play from the passage of ObamaCare last year, would truly be taking the nation back to the high pre-Reagan tax rates that we dismantled in the 1980s.  These dramatic lowering of the marginal tax rates helped contribute to the massive expansion of the United States economy from the $2 trillion GDP of 1980 to the over $14 trillion GDP of today even after 3 years of the most difficult economic recession we have had since the Great Depression.

The Greek mythological character Sisyphus is the best character we know to represent the 'illogic' of trying to raise taxes to solve our current budget problems.

Sisyphus was a king who was condemned by Zeus to roll a stone up to the top of a hill with great effort only to have it roll back down the hill each time for all eternity for his trickery in escaping death previously.

Have you ever had such a day, week, month, year or decade? We all know what Sisyphus must have felt like. Here’s why trying to raise taxes is such a Sisyphean task nowadays:
But beyond those cold hardened facts, here is the real Sisyphean kicker to the chops of every tax-hiking advocate nowadays:

The taxes on not only the highest-earning taxpayer but millions and millions of upper-income, high-income and yes, even middle-income taxpayers are ALREADY GOING UP! They are built into current law!

You see, when President Obama and the Democrat Congress extended the Bush tax cuts last December, all they did was extend them until when, class? After his hoped-for re-election in November, 2012, just like he wanted the debt ceiling to be extended to after the election as well.

Does anyone see a pattern building here? ‘Bueller, Ferris Bueller?’

If President Obama wins re-election to a second term, which is still a better than 50/50 proposition nowadays, these Bush tax cuts will expire per current law on New Year's Eve, 2012. What does that mean?  It means a return to the tax rates of 2001 before Bush took office. It means a complete restoration of estate (death) taxes to as high as 55% on net wealth that could have otherwise been passed on to your heirs.

But the most insidious and wicked of all tax expirations would be the dreaded AMT, the Alternative Minimum Tax. Why is this so nasty?

Because up to close to 24 million new taxpayers, including many who are reading this post right now, would be pushed into much higher tax rates and categories on January 1, 2013 and would pay from many hundreds to many thousands of dollars more per year to the federal government.

Less than 4 million American taxpayers are subject to any sort of AMT tax bite today. 24 million new people hit by the AMT represents almost 20% of the entire number of people who voted in the 2008 presidential election.  You want to see a 'mad' electorate and a 'revolution'?  Let the AMT go into full effect and unindexed for inflation.

After that, perhaps as many as 10 million new taxpayers PER YEAR will be pushed into higher marginal income tax rate categories subject to the AMT if not indexed for inflation.  There could be over 125 million taxpayers paying the AMT by 2025 or sooner up from less than 4 million today.

Take a very close look at the CBO report mentioned above. Under their ‘current law’ baseline scenario, tax revenues are expected to reach 21% of GDP by 2021. Up from 15% today.  Up almost 3 percentage points of GDP from the historical average of 18 % for these past 40+ years. Up to 23% of GDP by 2035.

The primary reason? No silly, not because the rich will be paying more taxes. We all know they won’t because they can shelter it all.

Because those 24 million more normal income-earning people will be paying the AMT, that is why!

And you can rest assured and bet your bottom dollar that there will still be screams for the ‘rich to pay their fair share!’ even if tax revenues hit 23% of GDP because federal spending will have then out-raced tax revenues to consume 30% of GDP by that time!

So the rock that King Sisyphus was condemned to push up that hill back in Greece really could be the tax burden that American taxpayers will be forced to pay from here on out unless something drastic and dramatic is done right away in Congress to curtail the upward cost spiral in federal spending, mostly in entitlements.

We just had a brief taste of what can happen if we don’t take bold action as exemplified by the S&P downgrade of US bonds. Are you ready for a whole boulder to come crashing down the hill on you in the form of higher interest rates, possible out-of-control inflationary pressures and a dollar that continues to depreciate against every other currency in the world?

We didn’t think so.

We strongly suggest Congress get back to Washington this afternoon and start whittling, reducing, whacking and Weed-Eating away at federal budget spending from stem-to-stern.

It has got to be done.

(selected text on long-term outlook for tax revenues from CBO book to focus on:

The Long-Term Outlook for Revenues

Federal revenues have fluctuated between about 15 percent and 21 percent of GDP over the past 40 years,averaging 18 percent. Just as mandatory programs have accounted for a growing share of spending during that period, the composition of revenues has shifted. Receipts from payroll taxes have grown faster than GDP, producing a larger share of total revenue.

At the same time, the shares contributed by corporate income taxes and excise taxes have declined.

However, under the current-law assumptions of CBO’s baseline, revenues would rebound over the next decade with expected improvement in the economy, the scheduled expiration of tax cuts enacted since 2001 (and most recently extended in 2010), and sharp growth in the number of taxpayers subject to the alternative minimum tax.

Under the extended-baseline scenario, revenues would continue to rise gradually thereafter, reaching roughly 23 percent of GDP by 2035.

That increase would occur largely because, under current law, real growth in income would push people into higher tax brackets over time, and inflation-related increases in income would make more income subject to the AMT.

The excise tax on certain high-premium health insurance plans that was enacted as part of the March 2010 health care legislation would also contribute to the increase. All told, average tax rates (taxes as a share of income) would rise considerably, and people at various points on the income scale would pay a larger percentage of their income in taxes than people at the same points do today. In addition, the effective marginal tax rate on labor income would rise from about 25 percent now to about 35 percent in 2035.

For the alternative fiscal scenario, by contrast, CBO assumes that tax law will be changed over time to continue certain policies that are widely expected to be extended and to keep revenues at a percentage of GDP more consistent with past patterns.

Specifically, for this scenario, CBO assumes that all tax provisions scheduled to expire in the next 10 years—other than the reduction of 2 percentage points in payroll taxes for 2011—will be extended through 2021. Most important, the tax cuts enacted since 2001 are assumed to continue, the reach of the AMT does not expand, and the estate tax is extended with the rates and exemption amounts scheduled to be in effect in 2012 (adjusted for inflation).

Beyond 2021, CBO assumes unspecified changes in tax law that keep total revenues at the same share of GDP as in 2021.