‘Ok, These Monstrous Budget Deficits Really ARE The Fault of The US Constitution and Those Nutty Founders’ 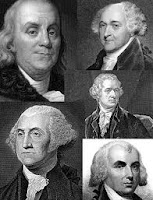 We think we may have found the problem to our national budget mismanagement and fiscal malfeasance on the part of our elected 'leaders' (sic) in Washington:

‘It is all the Founders’ fault!’

Those wacky guys James Madison, Alexander Hamilton, George Mason and Ben Franklin….they just plain forgot to put any words relating to balancing annual budgets; insuring that annual spending matched annual revenues or even putting in some archaic 18th-century clause such as ‘protection of the national fisc’ in our US Constitution.

Not a one. Not one single word relating to financial and fiscal sanity. They made clear that Congress would 'lay and collect taxes' and 'pay the debts' but said nary a word about balancing annual budgets which would certainly obviate the need to raise taxes to pay back debt in the first place.

Maybe they were all out drinking every night with the brilliant but oft-inebriated Luther Martin of Maryland.   Apparently, they were rendered unable to include any fiscally-sound budget language clauses in the draft language the following mornings.

Surely they must have have presumed that all American 'leaders' (sic) who would follow in their illustrious and esteemed footprints over the next 220 years would never allow our collective national debt to escalate out of control as we have done over the past 10 years.  Mr. Jefferson wrote profusely about the dangers of excessive national debt and not incurring any debt that they would not pay off themselves in terms of higher taxes within their living generation, or 20 years roughly.

But since Mr. Jefferson was in France trying to find money to help pay off the America debts from the War and negotiate trade treaties so the economy could recover, he was not in Philadelphia to insure that a balanced budget clause got inserted into the US Constitution. That is too bad.

Surely after their experience of living on the precarious cliff of insolvency to fight their War of Independence and going to the Dutch on bended knee begging for help to alleviate their debt crisis, the Founders must have assumed that no succeeding generation of Americans would ever be so stupid and dense as to follow that dangerous course of action.

Apparently, every one of those highly-educated, learned men in Philadelphia just decided that the US Constitution was not the place to muddy up with lots of entangling language on maintaining balance in annual federal budgets.

Go ahead. Take a look at the sacred document itself, the U.S. Constitution. Read every single word of it and come back and tell us if you found one single word or phrase that mandates that the US federal government ever has to balance their annual budget.

Or restricts spending to below what annual revenues will be. Or calls for the government to be below a certain proportion of GDP or any other metric you can think of.

You can not find it. We have tried. Really, we have tried very hard to find the words. And when we did not find it in the Constitution or the Amendments, we were horrified.

With that in mind, we are not quite sure it is proper to castigate and point fingers at Progressives who all along have been advocating higher spending at the federal level. After all, the United States Constitution says pretty darned clearly in English that Congress shall ‘promote the general welfare’ and take all ‘necessary and proper’ actions to do so, doesn't it?.

On top of that, we have Conservatives advocating tax cuts ‘to stimulate the economy and provide new jobs’ (‘promote the common welfare’ again) and that these actions are ‘necessary and proper’ at this ‘critical point in American history’ (today for example)

And they almost never pair those tax cuts with commensurate spending reductions.

‘Because the US Constitution doesn’t say they have to do it!’

And that has to be changed, in our humble opinion.

Like maybe by passing a Balanced Budget Amendment to the Constitution once and for all?

Amendment 28- ‘Congress shall pass annual federal budgets that are balanced between spending and revenues, except for times of war and economic recessions, in which case they will provide a plan to balance the budget within 10 years of the end of either war or the recession.’

The last Amendment passed in 1992. We are about due for another one….and this one would be far more important than whether a Congressman can vote themselves a pay raise (#27) or people can buy liquor or not (#18 Prohibition passed/ repeal of Prohibition #21)