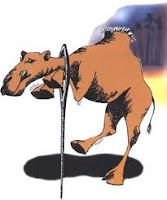 What is the fascination with ‘redistribution of wealth’ anyway as envisioned by the Obama Administration?

We think we already have perhaps the greatest economic ‘redistribution’ of wealth system the world has ever known, 'free-market capitalism'.

So why mess it up with a bunch of needless government intervention from Washington?

We are afraid that the advocates for such idealistic change would screw it up and actually get the exact opposite results through the immutable laws of unintended consequences and damage the golden goose of all redistributionist economic systems by passing needless regulations and interference from theorists in ivory towers.

Capitalism allows people to make investments and take risks on their own accord. Some work out for the best and succeed and live long lives and make lots of money. Many, however, perhaps 90% of them, don’t survive as viable businesses for over 5 years.

What happens in the event of any new investment in a business? People get hired, and get paid, by the entrepreneur and the managers of the business, which is the very definition of ‘transferring wealth’ from the wealthier person (the owner with access to the money or investment capital) to the less wealthy person (the worker/employee).

The money to pay those salaries could come from the entrepreneur himself from success in a previous business or, horror of all horrors! from an inheritance from one of his wildly successful ancestors such as the Vanderbilts, the Dukes or the Carnegie-Mellons.

(Ever wonder why so many colleges and universities get named after very successful, very wealthy entrepreneur families? Gee, if these rich people were so ‘terrible’, why did all these people give their money away to start so many fine institutions of higher education, hospitals, libraries or museums? We wouldn’t even have Duke basketball to cheer for or a medical center that can do wondrous things for cancer, heart and leukemia patients among others. All of these represent, yet again, a 'transfer of wealth from the very wealthy to every single person who draws a paycheck from any of these institutions, from the scientist to the doctor to the teacher to Coach K himself' (except for his Nike endorsements, of course))

What is up with business managers anyway? Are they some sort of crazy ‘secret socialists’ who are trying to give all their money away in some sort of humanitarian gesture?

Nope. Far from it. They want to make a product or sell a service for more than it costs to make it, plain and simple. And if they hit the right niche in the market and succeed, they hope to make money and provide a better life for their family, friends and neighbors.

What happens when a business fails? The employee loses his/her job, that is for sure, but the entrepreneur loses his entire cash investment and the bank that loaned him money to grow won’t get paid back. So that is a double-whammy success hit in the eyes of the proletariat against the big, bad business interests…the employees get their salaries and benefits from the rich owner AND 'the dirty, low-down rotten big banks' before they both declare bankruptcy and write off these losses.

One thing you never hear in the news about the disparity between the rich and the not-so-rich: the composition of the top 10% of the wealthy in the U.S. is not static and doesn’t stay the same year after year. Bernie Madoff was once considered a ‘rich’ man in America before he was convicted of outrageous malfeasance and sent to rot in prison for the rest of his natural-born days but he is no longer in the top wealth percentile of Americans. So he will no longer be a component of the 'fabulously wealthy' in America, thankfully.

People sell their farms or small businesses and jump up into a high-income category in one year only to fall back into middle-income status for the next 10 years. So your next-door neighbor might be statistically a modern-day King Croesus in 2010…and then after paying all his bills, college tuitions for his children and fixing his barn, a mere commoner in 2011.

For those of you who vehemently despise wealthy people, have you ever read the biblical account of the rich man trying to get into heaven? ‘Again I tell you, it is easier for a camel to go through the eye of a needle than for a rich man to enter the kingdom of God.’

One word comes to mind: ‘Ouch!’

Maybe being fabulously wealthy is not all that it is cracked up to be.

Still, without enterprising, energetic risk-takers, investors and business-builders, we would have very little to redistribute through the fundamental market mechanisms, philanthropy or through tax policy that funnels money from wealthy people to other people (who are not necessarily even close to being ‘poor’ as we have seen in the case of Medicare and Social Security benefits going to Bill Gates and Warren Buffett….but more on that later)

The private sector is the only place where wealth can be created out of thin air. Let it work to continue its remarkable redistributionist processes that have brought us from the time of feudal monarchies controlling everything to the largest number of pretty well-off citizens the world has ever known.
Posted by Frank Hill at 11:42 AM