Check Out What the Greeks Are Having to Do Regarding Raising Their Retirement Age...by Force 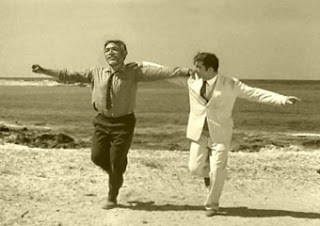 No sooner had we posted our last observation about the critical need for the FY 2011 Obama Budget to include a rapid increase in the eligibility age for Social Security and Medicare than the news came on CNBC that Germany was forcing the Greek government to its knees to raise its retirement age in return for any financial bailout assistance to help stabilize the euro. (see “Greek Debt”.)

They are taking the ‘radical’ step of raising their retirement age to 63…from 61!

Good Grief!  Imagine what sort of peace and prosperity the world would experience if America and the EU nations jointly raised their retirement ages to 70!  The fears about every industrialized nation’s burgeoning debt would diminish, if not evaporate overnight and at least one major financial sword of Damocles would be put to rest.

And then we found the following article about Spain taking pre-emptive action to raise the retirement age of its citizens to 67. (see Spain)

What in the name of Sam Hill is going on here?

We are of the opinion, without being too apocalyptical about it or alarmist in a very pessimistic way, that we are now in the time period where policy-makers 30, 20 even 10 years ago always warned about when the ‘chickens will come home to roost’. (interesting derivation here….maybe pigeons would have been more appropriate)

We remember sitting in untold numbers of House Budget Committee hearings from 1991-1994 and Entitlement Commission meetings from 1993-94 where expert economist after expert economist all said the same thing: “We can run deficits up to a point but whatever that point is, we will have to pay higher taxes and/or dramatically reduce our federal spending to come back into balance and reduce this enormous debt we have been building up since 1970…(pick any year since whatever the debt level was at the time was considered 'way too large’ at the time as well)

And they would all conclude by saying, in essence: “And besides by (1990/2000/2010… whatever was 10-15 years out in the future), the American people will have wizened up by that time and the people in Congress will have already taken care of the long-term structural problems.  The American people are not that dumb to allow it to happen forever.”

Uh, sorry about that, sirs and madams….but we have not ‘taken care of it just yet’…and we are showing zero signs of taking this seriously and doing so now in 2010.

That is why you need to pay very close attention to how Germany and the European Union deals with the profligacy of the Greek government and society right now, today.  They are going to force some ‘painful’ reforms on the Greek people that they are incapable of forcing on themselves apparently.  What an embarrassment that the birthplace of democracy, Greece itself, is now having to be forced by outside creditors and guarantors to make the hard decisions they should have been making through their own legislative process for the past 30 years.

Sound familiar?  It should because we have followed the exact same course as the Greeks: “We want it all, we want it now and we don’t want to pay for it out of our pockets so we’ll just borrow it from the Germans and future Greek children with loads of debt and live and and dance like Zorba the Greek”.

Presumably, if Greece were a US state, they would be running to Washington asking for a bailout of their finances just like California ($1.85 trillion GDP) and the others have already done.

The party is over for the Greeks and the contagion is about to spread throughout the EU.

Why don’t we just do the right thing now, bite the bullet, cut back on all of these excessive spending programs, reform and scale back on these entitlement commitments and return to a life of economic growth and prosperity?

That would be a lot more fun than the last 2 years, which might become 10 years if we don’t watch out…wouldn’t it?

courtesy of www.greek-islands.us
Posted by Frank Hill at 2:15 PM