What is 'Really' at Stake in The Health Care Reform Bill? 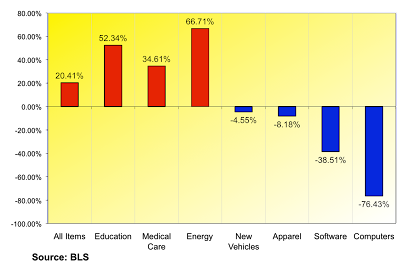 Now that the health care debate has moved out of the Senate Finance Committee and spilled onto the floor of the U.S. Senate, it is important to remember the main reason why getting the ‘correct’ form of health care reform is so critical at this point in time.

Popping the inflationary balloon in health care costs would save us trillions of dollars that will otherwise have to be borrowed over the next 20-30 years from your kids and grandkids. Did you know that just from 2000-2007, medical care (and college tuition costs...but that is for another posting) have exploded while things like computers, software and even new automobiles have dropped? (see chart above, 1)

Reducing the medical inflation rates to some 'normal' level would be the modern-day equivalent of Alexander the Great cutting the Gordian Knot with one fell swoop of his sharp sword.  The former congressman I served as chief of staff, John ‘Alexander’ McMillan, III, used to refer often to this legendary tale when dealing with seemingly intractable issues in Congress.

There were always ‘solutions’ to problems and sometimes, making the bold stroke is the surest and fastest way to solve the problem.  Now is the time to make such a bold stroke.

(It didn’t hurt that ‘Alexander’ meant ‘leader of men’ so where are all the ‘Alexanders’ out there anyways?)

The upward spiral in health care costs has not abated for the past 30 years, no matter what Congress has done or we do as consumers of health care. The reasons are ‘legion’, to borrow a particularly damning Biblical reference, but they range from third-party payors of health care premiums, lack of substantive tort reform, expensive but effective advances in medical technology, terrible health habits of millions of Americans and the list can go on and on.

Whatever the reason, this current iteration of health care ‘reform’ has got to be compared to a Gordian Knot-type of complete reform or else it will just be another wasted opportunity to do the public’s business for the good of the entire country, first and foremost.

Take a look at the next chart. Medicare costs are expected to go through the roof over the next 30 years. A large part of it has to do with the sheer increase in the number of old geezers (us in the Baby Boom generation) who are going to be loading up on the Medicare bandwagon.  The ‘excess cost growth’, as it is known, is the growth in health costs over and above the expected increases due to 'normal' inflation and more Boomer enrollees.  It compounds with each passing year and we all know that compound interest is ‘the most powerful force in the universe’ according to none other than Albert Einstein himself. 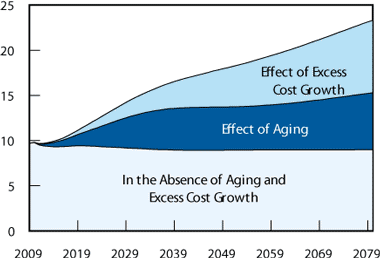 Looking at it another way, if we could just hold the annual rate of inflation in overall health costs to JUST the rate of normal overall inflation in the economy, $200 billion in Medicare costs alone could be saved in FY 2019. That would mean we would have to seriously change our eating and exercise habits as an entire nation; drive down costs through the use of computer technology and medical advances and dramatically raise the retirement ages for Medicare eligibility, all critical 'structural reforms' that have to be undertaken to account for the huge number of new Boomer Medicare recipients with longer lifespans.

That is it.  Plain and Simple. But enormously complex in implementation. The Gordian Knot will have been cut, the budget will have been balanced,the dollar will rebound and we will all live in the land of milk and honey once again

And our children and grandkids will LOVE us for it….we will not be judged as the ‘craziest’ or ‘stupidest’ generation of Americans to have ever walked the face of earth after all.  We will have 'won one for the Gipper' (Reagan); 'done what we should have done for our country' (Kennedy) and made 'one giant leap for American-kind' (Neil Armstrong?)

BUT, and this is a tremendously large ‘but’, it all depends upon this current health care reform bill being done right and breaking the back of the structural factors in the whole health care industry that has led to very high rates of inflation in health care over the past 3 decades.

There is some serious doubt that any of the current bills under consideration by Congress can accomplish this goal. In fact, many experts believe this bill will do nothing to break the structural factors dealing with the inexorable rise in medical costs because, well, frankly, because no one in the White House or Congress is brave enough to deal with them right now.

"If not us, who?  And if not now, when?" President Reagan rhetorically asked in his Second Inaugural Address.

If they don’t deal with these structural problems now in the next 3 months, we’ll have to start all over again to get it right. In January of 2010.  We don’t have any other options.