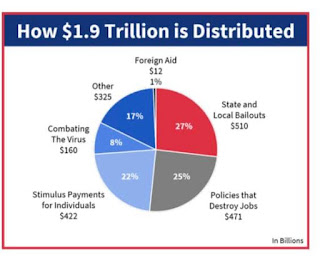 I have seen a lot of gargantuan spending bills go through Congress in the form of budget reconciliation or omnibus appropriations at the end of a contentious session.

I don’t think I have ever seen one so loaded up with extraneous spending that has nothing to do with dealing with the crisis at hand as the second COVID-relief plan passed by the Democratic Congress last week, the American Relief Plan (ARP). Not OBRA, COBRA, TEFRA, EGTRRA or PPACA, otherwise known as Obamacare.

None of them come close.

There is $1.5 billion in this bill for AMTRAK. AMTRAK has never been profitable since inception in 1971. COVID didn’t cause current problems at AMTRAK; AMTRAK structure and management has always caused problems at AMTRAK.

The list of egregious pork spending in this COVID relief bill is embarrassing. There is $200 million for museums and libraries — even though they were shut down for an entire year; $270 million for the NEA, the National Endowment for the Arts. There is $128 billion for K-12 public education — except 95% of this money will not be spent until between 2022 and 2028, not in 2021.

There may be $600 billion in this bill that can reasonably be tied to COVID relief including funding for more vaccines ($75B), PPP ($473B), aid to ailing restaurants ($26B), assistance to airlines ($15B) and $7.2B for PPP for small businesses that have been wrecked by gubernatorial executive shut down orders for the past year.

Had the bill stopped there, President Joe Biden might have had his first truly bipartisan victory for “unity,” with a majority of Republicans voting for it in the House and the Senate.

The remainder of the $1.3 trillion is pure partisan politics. Democrats are paying off the constituencies that elect them and who helped defeat President Trump. There is no other way to look at it.

Arizona Republican Congressman Paul Gosar offered an amendment to take out all non-COVID-related spending in the bill and convert it into sending $10,000 checks to these people most affected by COVID instead of $1400.

It was defeated along party lines. Democrats want to send more money to big blue state politicians to distribute to their supporters instead of directly to the average American family.

Remember the infamous “Bridge to Nowhere” in Nowheresville, Alaska, which forever tarnished the career of Sen. Ted Stevens in 2005? The left and the media rightfully jumped on the Bridge to Nowhere to highlight how elected officials waste federal dollars with no regard to the consequences.

There is the equivalent of 2,222 wasteful “Bridges to Nowhere” in this solidly Democratic bill that Senate Majority Leader Chuck Schumer “swears” is “big, bold COVID relief!” It most definitely is not all related to COVID.

One thing that is truly “bipartisan” in Washington, sadly, is the astounding amount of federal debt both parties in control of the White House and Congress have amassed since 2001. Federal debt owed to the public was $3 trillion before 9/11. If this bill becomes law, debt owed to the public will approach $24 trillion by the end of 2021. Roughly $6 trillion in intragovernmental debt is owed between the government and such programs as the Social Security Trust Fund which will never be repaid.

If, or rather when, inflation is triggered again by such fiscal malfeasance and explosive money supply growth by the Federal Reserve, then all of us — rich, poor, black, white, young and old — will really be in this mess together.

President Joe Biden seems to want to steer America back to the stagflation economic doldrum days last seen under President Jimmy Carter in 1979-81. He has only been in the White House for 41 days; imagine what economic damage he and the Democrats might do over the next four years.