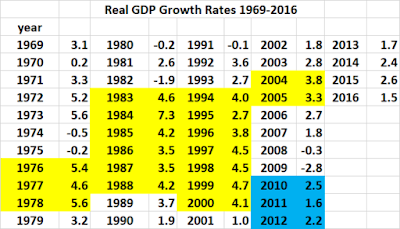 The average annual rate of real GDP growth under the policies of President Obama and Vice-President Joe Biden from 2010-2017 was 2.1%.

Economic growth was not “great,” as Joe Biden and the Democrats want you to believe. In fact, it was dismal, desultory, sub-standard and poor.

Most business owners, small and large, were on virtual strike during the entire Obama/Biden Administration. They were unwilling to invest, expand and hire aggressively until the morning of Wednesday, Nov. 9, 2016, when they realized the heavy-handed, business-unfriendly policies of Obama/Biden and Hillary Clinton were on their way out of the White House at noon Jan. 20, 2017.

It was one of the worst periods of stagnant economic activity ever. Almost as bad as under President Jimmy Carter.

Which is saying something.

After the crushing economic recession of 1973-74 caused by the “oil crisis,” which looks almost quaint now that America is energy self-sufficient, the economy rebounded to grow an average of 5% in real GDP under the policies of President Gerald Ford in 1976 and into 1977. President Carter somehow figured out how to mismanage both fiscal and monetary policy such that the hellhounds of inflation (12%) and sky-high interest rates (21%) were unleashed on every American consumer, worker, retiree and citizen.

President Reagan’s free market policies sparked real economic growth rates that averaged 4.5% annually from 1983 to 1988. The real 7.4% growth rate in 1984 is more related to the momentum coming out of bad recessions since so much of any recovery is attributed to regaining lost ground and jobs quickly.

Every new administration elected after a recession has enjoyed the “miracle” of high economic growth rates far in excess of 2% in the first several years of new leadership. Except under VP Biden, who says he was appointed by President Obama to lead us out of the greatest recession since the Great Depression.

George H.W. Bush 41 was defeated by the recession of 1990-91 that was still lingering far into 1992 when former Arkansas Gov. Bill Clinton won in a three-way race that included Ross Perot. For seven out of the eight years of Clinton’s presidency, Americans enjoyed annual 4% real GDP growth rates fueled by the first internet boom.

In 2010 at least, and certainly 2011, America should have experienced similar economic booms of 4%, 5%, 6% or 7%+ annual real economic growth rates that generated millions of new high-paying jobs.

It did not happen. There was not one single year under VP Biden/President Obama’s leadership when America achieved real inflation-adjusted growth rates over 2.6%.

How could it? First the financial banking system had to heal from massive wounds, most of it self-inflicted by reckless, overleveraged loan and investing policies. Then President Obama insisted on saddling the U.S. economy with much higher taxes, more federal deficit-spending, exorbitant regulation and a virtual government takeover of health care which constituted 16% of the entire economy. He and VP Biden crammed the ACA through Congress without a single Republican vote.

Vice-President Biden whole-heartedly supported every single Obama policy. He never said anything negative about their joint strangulation of the American economy, not even when President Obama said 2% growth was the “new normal” for America.

Mr. Biden wants you, the American voter, to go back with him in time to “the halcyon days of the Obama Administration,” a time that was so unsuccessful that the American economy, employment and stock market took off the day after Americans realized their terrible policies would end, because Hillary Clinton was not elected to continue them.

Progressive liberals and #NeverTrumpers want to bring back those dark days to you, the America citizen. Go ahead if you want to vote for Joe Biden and other progressives, but just know you will be hurting yourself, along with 160 million other working Americans of all races, religions and ages who have prospered since Nov. 9, 2016.