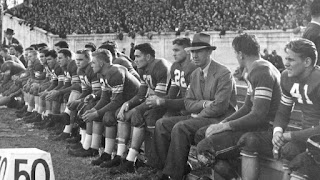 Syracuse pummeled Duke 49-6 last weekend.
Eighty-one years ago, they were scheduled to play the seventh game during Duke’s magical undefeated, untied and unscored-upon 1938 season. Syracuse almost had to play short-handed without their best player, running back Wilmeth Sidat-Singh.
He only played because Duke’s legendary Coach Wallace Wade did the right thing so his Iron Dukes could play Syracuse at full-strength, not less than their very best.
Wallace Wade was a very conservative Republican, a man of strong principle and a patriot beyond being one of the great college football coaches of all time. He said his greatest disappointment in life was not being allowed in the first wave of the Normandy invasion on D-Day, June 6, 1944.
The Army said he was too old. At age 52.
He was a close friend of Sen. Jesse Helms and brave Republican politicians who dared to run in heavily Democratic North Carolina over the years.
Wade was born in 1892 in rural Trenton, Tennessee. He went on to become a feisty, 150-lb guard on Brown University’s 1916 Rose Bowl team.
Coach Wade blocked for Fritz Pollard, who was the first black running back named All-American. Pollard went on to become one of the first two black NFL players and then the first black head coach in 1918.
They also became close friends.
In 1938, a “gentleman’s agreement” existed where Northern colleges who had black players would hold them out of the games against all-white Southern college football teams such as Duke or Carolina if requested. 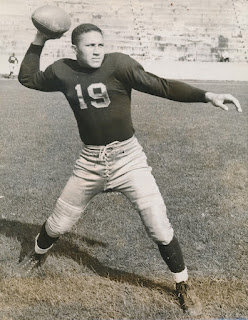 Several weeks before the Nov. 12 game, Syracuse officials cabled Coach Wade to inquire as to whether they should bench Sidat-Singh for the upcoming game at Syracuse.
Sidat-Singh was born to African American parents. When his father died, his mother remarried an Indian physician who gave Wilmeth his last name. Most everyone thought he was Indian, not African American.
Sidat-Singh was a great back who could throw, presaging today’s game where a running quarterback such as Baltimore Ravens’ Lamar Jackson can dominate a game.
Coach Wade wired back that Duke had no objections even though “a previous contract states that he will not be allowed to participate against Duke.”
Before the game, Wade said, “If he doesn’t play, no matter what the score is, we’ll get no credit for winning.” Wade had won three national titles at Alabama in three Rose Bowls in 1925, 1926 and 1930 before coming to Duke in 1931. He demanded the best. Always.
“If you are not good enough to play in the Rose Bowl, you are not good enough to play in any bowl” he would tell his team at the beginning of each season.
Sidat-Singh was allowed to play and there were no incidents or fights reported during the game. Coach Wade had instructed his players to treat Sidat-Singh as they would any other white player: Keep anyone in a non-Duke blue uniform out of the endzone regardless of skin color.
After the game, which Duke won 21-0, press accounts reported that Sidat-Singh went over to the Duke bench and shook the hands of Duke co-captains Dan Hill Jr. and Eric Tipton, which had to be noticed by everyone in the Syracuse stadium.
Coach Wade could have declined to play Syracuse had Sidat-Singh played. Duke players could have caused a huge ruckus and media incident by refusing to play or shake his hand after the game.
Coach Wade would have none of it. He played with and respected Fritz Pollard from his Brown University days. He knew that great football players were great because of their talent, not their skin color. His Duke players knew that to disobey, embarrass or, worse, disappoint Coach Wade would have been the kiss of death for them and the end of their careers at Duke, right at the very end of what was a magical season for them and the university.
Coach Wade’s decision exemplified what the essence of America should always be about: a free country where the content of someone’s character and talent matters far more than the color of their skin. And winning.
(first published in North State Journal 11/20/19)