'The Resistance--- To What Exactly?" 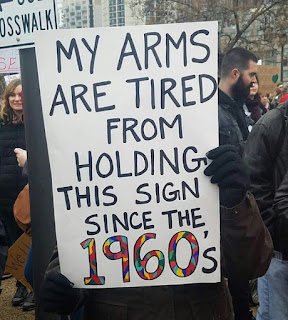 Elderly leaders of “The Resistance” movement — think Bernie Sanders and Elizabeth Warren— grew up in the ’60s protesting the Vietnam War; talking about peace and love; burning bras to support women’s rights and demanding freedom from government oppression.
Back then, they wanted to “Resist the Establishment.” “Fight the Man.” “Question Authority.” Everywhere.
A funny thing though happened over time. These same “resisters” never seemed to want to “Fight the Man” in Washington when power was in the hands of liberal presidents they agreed with such as Bill Clinton and Barack Obama.
They wanted to give them more power, not less. Giving more power to centralized government officials as adult voters went against everything they said was wrong with America as student protesters.
We went to Ocracoke over Labor Day where I bought a T-shirt from the owner behind the counter who seemed to be about my age. She had a “RESIST” sign prominently displayed, so I had to ask if it meant the same thing to her now as during the protests of the ’60s.
“It means I resist President Trump!” she said very nicely.
“Do you resist him personally or specifically on certain policies?” I asked as politely as I could.
“He is just not a very good person,” she said.
“We have had plenty of presidents who were not ‘very good people.’ Neither Bill Clinton nor JFK was a sterling paragon of moral virtue, you know.”
“Trump is a fascist.”
“Many commentators called him Benito Mussolini when he was elected in 2016. There haven’t been any brownshirts in jackboots breaking windows and dragging people off to concentration camps on the news lately.”
“He treated children at the border terribly,” she offered as a rebuttal.
“It is tough to take care of children separately when their parents enter this country illegally. If we don’t have a nation of laws, people around the world would stop wanting to immigrate legally or illegally to America.”
“He wants to make abortion illegal,” she said.
“Abortions are still legal around the country,” I said. “There have been some restrictions on taxpayer funding for abortion, but large majorities of Americans have always opposed taxpayer-funded abortions.”
“Do you think President Trump is racist?” I asked. “Would he restore the Jim Crow laws from the Old South?”
“I think he would if he could,” the shop owner replied.
“President Trump signed a criminal justice bill in December 2018 that would free disproportionately larger numbers of black and Latino prisoners incarcerated for minor drug offenses. Why would a truly racist president ever do that?”
“Can I ask you one final question, ma’am, before I buy this nice T-shirt which I hope you sell at a profit to stay in business?”
“Sure. Go ahead.”
“How has your business been the last couple of years?”
“Despite Hurricanes Matthew and Florence, I have had the highest sales I can remember,” she blithely offered.
“If your business under Trump has been better than it ever was under Obama, why would you want to ‘resist’ that prosperity?”
“President Obama was a good president. He wanted to help people,” she argued.
“We help millions of people when we have a growing economy where everyone can find a job to support themselves and their families. Isn’t that better than having them all on government welfare?
“You are part of ‘The Resistance’ to President Trump which seems more personal in nature,” I said. “I agree with the idealism of our youth — I still don’t trust the concentration of massive amounts of power in the hands of a very few elected or appointed government officials in Washington to tell the rest of us what to do all the time.
“Wouldn’t it be nice if liberals, conservatives and independents could band together to ‘Resist the Establishment’ regardless of who is in power? Try to make our government smaller and quit spending so much money and building so much debt for our children to pay?”
She just smiled and said goodbye.
(first published in North State Journal 9/11/19)