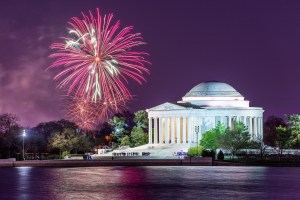 July 4 around the globe is like any other day in any particular country. No fireworks. No parades. No cookouts. No memorial prayer services.

Had John Adams had his way, the Fourth of July would be the same in America today. He thought “The Second of July” was going to be “the most memorable Epocha in the History of America.”

Every nation that has adopted the freedom principles for self-governance in the Declaration of Independence should join America with massive fireworks displays to celebrate what happened in Philadelphia, 1776, whether it was July 2nd or July 4th.

When Thomas Jefferson wrote these immortal words below, the whole world changed whether people around the world living today know it or not:

“We hold these truths to be self-evident, that all men are created equal, that they are endowed by their Creator with certain unalienable Rights, that among these are Life, Liberty and the pursuit of Happiness. — That to secure these rights, Governments are instituted among Men, deriving their just powers from the consent of the governed, — That whenever any Form of Government becomes destructive of these ends, it is the Right of the People to alter or to abolish it, and to institute new Government, laying its foundation on such principles and organizing its powers in such form, as to them shall seem most likely to effect their Safety and Happiness.”

The Revolutionary War was already a year old when the Continental Congress convened in Philadelphia in the summer of 1776.

On June 7, Richard Henry Lee of Virginia started the process toward independence with a resolution that read: “Resolved: That these United Colonies are, and of right ought to be, free and independent States, that they are absolved from all allegiance to the British Crown, and that all political connection between them and the State of Great Britain is, and ought to be, totally dissolved.”

On June 11, Jefferson was selected to head up a committee to write a formal Declaration of Independence. Delegates voted for Independence on July 2, which led John Adams to believe that the Second of July should be celebrated forever.

However, given that it was a legislative body, slight revisions to Jefferson’s text were made on July 3 and late into the afternoon of July 4 when the Declaration was officially adopted. Nine colonies voted yes; Pennsylvania and South Carolina voted no; Delaware was undecided and New York abstained.

Historical hagiography has led everyone to believe that Continental Congress President John Hancock of Massachusetts assigned his beautiful “John Hancock” to the newly adopted document with a flourish right then and there.

No one signed the Declaration until a month later on Aug. 2, 1776. But Hancock did sign it first.

John Adams was so moved by the passage of the Declaration that he wrote his wife, Abigail, on July 3:

“The Second Day of July 1776, will be the most memorable Epocha, in the History of America. I am apt to believe that it will be celebrated, by succeeding Generations, as the great anniversary Festival. It ought to be commemorated, as the Day of Deliverance by solemn Acts of Devotion to God Almighty. It ought to be solemnized with Pomp and Parade, with Shews, Games, Sports, Guns, Bells, Bonfires and Illuminations from one End of this Continent to the other from this Time forward forever more.”

Adams was right about that. Except it is the 4th now, not the 2nd. And every free nation on earth beyond our continent should celebrate with America.

Those remarkable words in the Declaration of Independence have changed the lives of billions of people the world over who have read them and adopted the concepts of freedom and self-government embodied in the Declaration and later from our U.S. Constitution.

Everyone in America should read them again. We need a rebirth of appreciation and gratitude for the amazing gift of equality and freedom these men gave us 243 years ago.