2% Real GDP Growth Rates Are NOT The New Normal 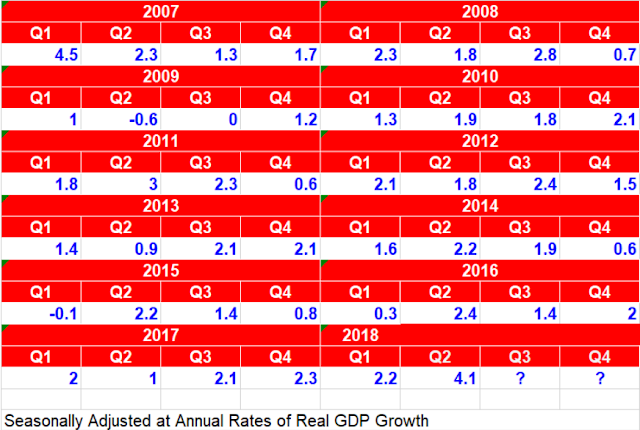 ‘2% real GDP growth is the new normal for the US economy’.

2% annual growth wasn’t even the ‘new normal’ under President Obama.


‘It is a crisis of confidence. It is a crisis that strikes at the very heart and soul and spirit of our national will. We can see this crisis in the growing doubt about the meaning of our own lives and in the loss of a unity of purpose for our nation. The erosion of our confidence in the future is threatening to destroy the social and the political fabric of America.’

The ‘crisis of confidence’ Americans had from 1977-1981 was not in their own ability to perform.

Their ‘crisis of confidence’ was in President Jimmy Carter and his ability to lead.

The same can be said now about President Obama. His economic and foreign policy records will be linked with President Carter’s forever.

The above chart tracks the US economy on a seasonally-adjusted basis from the last year of the Bush 43 Presidency through 8 years of President Obama to 18 months under President Trump.

Seasonally-adjusted GDP growth rates actually make the first two years under President Obama look somewhat more favorable even though they were the worst two years economically since 1981-82 and before that, the Great Depression Decade of the 1930s.

No one in their right mind faults President Obama for the desultory real GDP growth rates in 2009 and 2010. The real estate crash nationwide and the failure of our banking and financial institutions plus the resulting job layoffs and business bankruptcies were the result of economic and fiscal polices that were years and decades in the making.

However, President Obama and his economic team had 6 more years to pass policies that would ignite the competitive economic spirit of America.

They failed to do it. Ever.

They concentrated their focus on managing everything with bureaucrats from Washington which crushed the free-wheeling spirit out of American business for the remainder of his term.

For whatever reason, be it Obamacare in 2010 that cast a very heavy blanket of regulations and taxes on US businesses or the avalanche of regulations the Obama Administration layered on American business, real GDP growth rates never exceeded 3% for any year of his presidency for the first time in modern American history.

Real GDP growth under President Obama averaged 1.9% annually for his presidency. If you take out the first 2 years and give Obama the benefit of the doubt since 2009-2010 clearly was a result of previous economic policies and mistakes and give him some credit for the 2017 growth rates even though a lot can be attributed to President Trump’s election, average real GDP growth on a seasonally-adjusted basis under Obama was only 1.64% annually from 2011-2017.

Businessmen and women today exude optimism and enthusiasm when they talk about their economic prospects and plans for expansion, increased sales and hiring more people.

Is it the tax cuts passed last December? Is it the rescission of hundreds if not thousands of federal regulations that were strangling economic growth? Is it the prospect of not having to worry about more taxes or regulations until 2020 at least and maybe 2025?

It may be all of these. It may be the fact that American businesses, workers and investors know that the Obama years are finally over and they can operate in a new business environment where they can work hard and keep more of what they earn and not pay more of it to the government.