How To Solve The Immigration Crisis At the Border 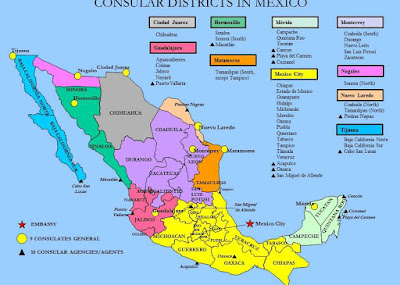 ‘Move all decision-making on all permanent and work-related visa applications away from the border’.

Make the US/Mexico border solely a checkpoint line where ‘go/no-go’ decisions are made allowing people with proper credentials to pass through.

Roughly 11 million US visas are granted each year. 80% are non-permanent tourist visas.

In 2012, it was estimated that up to 5 million people at the time had valid green card applications in process with the Department of State. Approximately 1 million permanent green cards are issued each year to people from all parts of the globe who have followed every step of the immigration process legally, in most instances, many times for many years.

There are 20 US consular offices, including the main Embassy in Mexico City, geographically dispersed throughout Mexico. People leaving Central American countries such as El Salvador, Honduras and Guatemala intending to immigrate to the US probably pass within 100 miles or so of 7 consular offices in the interior of Mexico.

People seeking political asylum or permanent visa status in the United States can apply at any of these local offices in Mexico today. The application process for permanent visas or asylum requests is clearly spelled out at www.state.gov.

President Trump could issue an executive order tomorrow directing the Secretary of State to reallocate resources and personnel within the Department of State to expand visa application services at all of the 17 consular-related offices in Mexico not located on the US border.

No longer would Central American people or children with or without accompanying parents be enticed to travel hundreds, if not thousands, of miles in unsafe conditions, on a very arduous and dangerous journey to the US border with no guarantee of success in the first place.

They can visit the consular office in Oaxaca or Acapulco instead.

One thing everyone the world over learns in childhood is ‘not to break in line!’ There is no valid reason to allow anyone from any country to skip ahead of the 5 million other people who have taken all the legal steps and paid all the legal money to get a permanent green card ahead of them.

Another step would be to adopt the Mexican legal immigration process as a precondition for evaluating US approval of their green card application.

Mexico has granted permanent status to roughly 1 million foreigners out of their population of 127 million people. Mexico has a very strict policy about immigration; once anyone qualifies for admittance to Mexico, their background checks have been thoroughly checked, verified and vetted.

If you want to apply as a couple for permanent residency in Mexico, you have to demonstrate an income stream over the past six months of at least $2,325 per month from a pension or other verifiable work-related accounts or have savings in the bank amounting to $93,000 US over the past 12 months.

If we followed the official Mexican government policy lead as a qualifier for consideration for permanent American immigration, then if a person has lived in Mexico as a bonafide Mexican citizen and complied with the laws of Mexico in an impeccable and spotless manner, perhaps then they could apply to come to the United States on a permanent basis later.

Everyone can agree that the American system of immigration is broken and in need of dire reform and replacement. Until then, we need to enforce existing law and protect the rights of law-abiding citizens who immigrate to America the legal way.

One reason why millions of people each year apply to come to the United States is because we are supposed to be a ‘nation of laws’ where citizens have equal rights and equal opportunities.

The day we cease to be a ‘nation of laws’ is the day people will stop lining up to come here.