'Politics is Philosophy By Other Means' 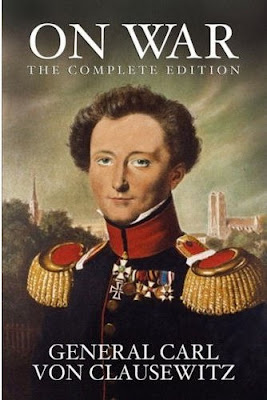 (first published in North State Journal 10/18/17)
Carl von Clausewitz, a Prussian general, wrote in his classic book on military strategy in 1818, 'On War':

'War is a mere continuation of policy by other means'

Taken one step further, this axiom can become:

'Politics is a mere continuation of philosophy by other means'

Everyone has their own individual philosophy about how the world 'ought to be'. These ideas and concepts come from some source from history unless the person has a personal epiphany and makes them up out of thin air somehow.

Many people want to expunge any personal philosophy from the public arena as we engage in discourse about our self-governance.

That is humanly, psychologically, mentally and physically impossible to achieve. We are not automatons that can be programmed to consume raw data in bits and bytes and spit them back out without some processing through our human emotions, thought patterns and worldview.

Many on the left have adopted the collectivist populist philosophy of class warfare to 'raise taxes on the rich!'  This line of thinking can be traced back to the 'Social Contract' of Rousseau in the 18th century and Hegel early in the 19th and, sadly, reached its full-blown expression in the writings of Karl Marx in 1859.

When it comes to using politics as a means to implement a particular philosophy into the American consciousness and public policy, the left has already ‘won’ in many respects. We have a progressive tax code; a massive entitlement system covering health, welfare and retirement programs for a majority of Americans today and a federal government that spends over 20% of our entire GDP each year.

Contrast the progressive tax code of today with the original intent of our Founders when it came to taxes.

"[A]ll duties, imposts and excises shall be uniform throughout the United States” they wrote and ratified in Article 1, section 8 of the US Constitution.

Our Founders had no intention of singling out any class of taxpayer for special or unusual taxation policies no matter their wealth or income status. Our convoluted income tax system would set their powdered wigs on fire as they tried to fill out even a basic income tax form 1040 on their own.

We are supposed to be a nation of liberty, fairness and equal opportunity. All concepts instituted in our Constitution by our Founders after reading philosophers such as John Locke and Adam Smith.

Consider the fact that the left says ‘the rich should pay their fair share!’ in taxes. According to whose standards, theirs or some philosopher from the 1800s? Who gets to decide exactly what their ‘fair share” should be anyway?

Perhaps the left is referring to Luke 12:48 which says: "For unto whomsoever much is given, of him shall be much required." Except that would be bringing religion into government debate, not just philosophy.

There is a real philosophical ‘war’ going on in the halls of Congress right now over this very question as our Congressmen and Senators struggle not only with tax reform but with determining the very size and scope of our federal government after years of aggressive expansiveness under President Obama.

Politics is hand-to-hand combat. Let’s hope it stays in the realm of philosophy.