We went to our dentist the other day to have a crown replaced (which is pretty amazing when you think that early in the 20th century, our grandparents probably would have just had the tooth pulled in a barber chair, much less 'fixed' with high-tech porcelain) and the dentist got all giddy about a new tool she was about to purchase.

'The next time you come in here and you need a filling, I might have a new laser drilling machine! No anesthetic necessary; no shots, no Novocaine!'

But if you ever wondered why the cost of health care is so expensive nowadays, just think about that for a moment: Our dentist is about to purchase a drilling machine powered by a laser beam!

'Will it cost more?' was the question through the cotton swabs in the mouth.

'Of course it will!' the dentist chortled. 'But you won't have to get another shot ever because the oscillation of the laser beam will numb your tooth!'

Ok. We will take that under advisement.

But when you think about some of the reasons why American health care is so expensive, keep in mind that laser beam and all of the double-lung/heart transplants, arthroscopic surgery and advanced pharmaceutical wonder drugs you have heard about and start to add some of those costs up in your head.

Approximately 50% of all the estimated per capita cost growth in health care can be attributed to medical technology breakthroughs such as (you name it; the barrier has been broken through). 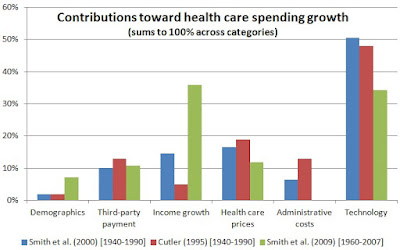 Demographics, usually pointed to as the culprit in all this inflation, plays a relatively small part in it, especially now that we are solidly in the retirement phase for the Boomers.

But think about it: had there been zero advances in the treatment of cancer or heart disease or kidney stones over the past 40 years, most people would just go to the doctor, be told the diagnosis...and then just lived with their condition until they passed on just like their grandparents and great-grandparents early in the 20th century and late 19th century.

No expensive machines or drugs to pay for; no cost inflation in health care.

One way to slow the growth of medical care cost inflation would be to have medical device personnel and Big Pharma just stop developing and inventing new ways to cure what ails us and make us well again.

And no one has ever said that.

Another way would be for everyone to act like they are going to basic training at Quantico and go on a rigid diet; start exercising vigorously every day; stop smoking, don't do illegal drugs and stop over-drinking soft drinks, beer, wine and whiskey and generally lose 25% of your BMI and get healthy.

One expert told us in 1989 that 35% of all medical costs would vanish into thin air if everyone in the nation did just that.

By 2003, that same expert told us that 50% of all medical costs would vanish into thin air if everyone adopted a healthy lifestyle. The main culprits of heart attack, stroke, cancer and most importantly, the costs associated with diabetes would be almost cut in half simply by people taking decent care of their own selves and bodies.

So, there are two things that would massively shift the cost curve downward steeply on health care costs in America. And it doesn't look like either are going to happen in the very near future.

So what does that mean for the AHCA recently passed by the Republican Congress?

It means that basically the higher risk/higher cost folks in our country, outside of the already segregated by age seniors (Medicare); by income (Medicaid) or by military service (VA and military health plans) members are going to be taken out of the basic commercial health insurance plans of America and placed into state-run risk pools.

Which another expert told us the day the AHCA passed the House would 'make premiums go down pretty fast' simply because all of the high risk, potentially high cost people would be taken out of the commercial risk pool and placed in the state risk pool.

What does that mean exactly?


It means instead of using basic principles of insurance in the private market across wide numbers of folks to cross-subsidize, usually the older, poor unhealthy folks by the healthy younger folks, we are now going to see the higher risk, higher cost people not already in Medicare or Medicaid subsidized directly by the taxpayer of every state with federal support through the back door.

Think about this for a second: IF Medicare and Medicaid and military personnel and their families were ALL a part of the general risk pool, insurance companies would have 320 million people to create enormous insurance pools and basically use the premiums of the younger healthier people (who don't use a lot of health care dollars) to subsidize the older or poorer cohorts of folks (of whom only a relatively small number use a lot of the health care dollar...but when they do, it adds up very quickly due to the technology noted above)

But they are not. Medicare and Medicaid started segregating older and poor people outside of the general risk pools in the mid-1960s and the taxpayer has borne the brunt of those costs every since. Since they are not directly subsidized by younger healthier people in a commercial risk pool, their costs are directly paid for out of tax dollars at the federal and state level.

Insurance companies want to insure healthy people first with very limited downside risk to paying for very expensive treatment when, or if, they get really sick.

Here are some of the pre-existing conditions that insurance companies in the past have used to decline coverage for various people. This is the problem that Republicans have attempted to deal with in the AHCA by providing support for state risk pools as very eloquently written by Representative Cathy McMorris-Rodgers this week when she said she voted for this AHCA bill because of her son who has Down's Syndrome.

Now, some of these are going to have to be dealt with such as 'acne'. Surely insurance companies can figure out how to pay for treatments instead of sloughing those costs off onto the taxpayer, can't they?

This passage of the AHCA in the House is just the kickoff of the first football game of the year. The Senate hopefully will down it in the endzone and bring it out to at least their 20-yard line since we all hope to God they have something already prepared to begin to deal with over there.

Then we will see if they can get it over the goal line in the Senate by this summer and then go to conference by the fall and passage before Christmas.

We think the tax bill will ultimately merge into this health care bill much like two mighty rivers and produce the largest Ginormous Omnibus Budget Reconciliation Bill (GOBRA) in American history but that is for a later post.

In the meantime, ask your dentist if he or she is going to be using a laser beam on your teeth soon. Seriously.