Want to Chart How Trump Is Doing On Job Front? 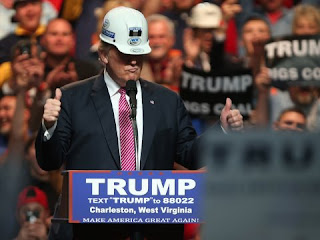 Here's everything you want to know about employment growth data over the past 100 years in America.

Whenever someone tries to manipulate the facts to his/her preferred candidate or political party, you can whip this report out and deal with the facts, not with their spin.

'The unemployment RATE is not the same thing as finding out how many people are actually WORKING at any particular time in this country!'

The most important figure in any economic report is how many people are working full-time. Not how many are working part-time or sporadically. Not how low or how high the unemployment percentage rate is.

The absolute hard number of people working full-time. THAT should be our dipstick to measure how well an economy is doing under any elected President or Congress.

The unemployment rate can be manipulated and pitched one way or another depending on whether you are attacking or supporting a politician or position. 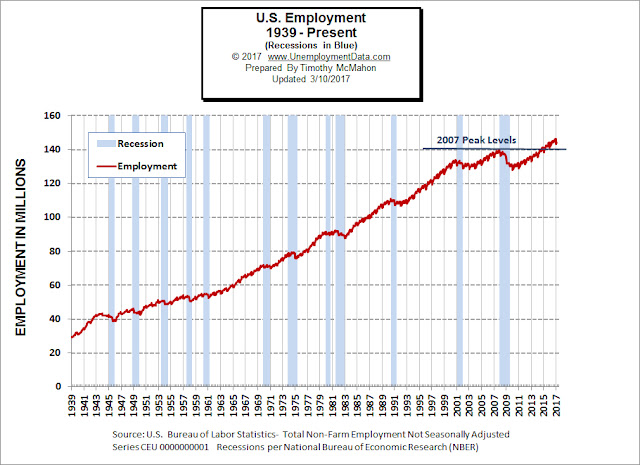 Here's what the Bureau of Labor Statistics has to say about employment numbers since the Great Recession of 2008-2010:


'The depth and breadth of employment losses during the Great Recession contrast sharply with all other recessions since 1939. From its peak in January 2008 to its trough in February 2010, non-farm employment decreased by 8.7 million, a decline of 6.3 percent.

Only the job loss during WWII was greater—from November 1943 to September 1945, employment declined by 10.1 percent. Recovery was slow coming out of the Great Recession.

It took 25 months to lose the jobs, and twice as long (51 months) to recover them by May 2014. This was the longest employment recovery time following any recession since 1939. The next longest recovery, often referred to as the “jobless recovery,” followed the 1990–91 recession, in which employment took 23 months to recover'

If there was any main reason why millions of people in Michigan, Pennsylvania and Wisconsin voted for now-President Donald Trump contrary to past elections when they went for the Democrat candidate, that paragraph above from BLS pretty much encapsulates the angst and anger than millions of people felt from the lack of robust job creation coming out of the Great Recession under the final 6 years of President Obama's leadership.

The length of the recession and the lack of a profound sense of rapid job creation led many to believe that the economic policies, the tax hikes and the enormous load of new federal regulation-making under President Obama just were not working for the average American worker.

Had the recovery been anywhere near the rapid snap-back of previous recoveries and expansions under other Presidents, the economic ferment would not have been as deep as it was in 2016 when millions of people turned to businessman Donald Trump and basically said: 'He can't do any worse than that on the economy, can he?'

So the key number to focus on is the 143.261 million (or so) of people actively working in the American workforce today (see chart below).

If that number ratchets up to 155 million by the end of Trump's first term, which based on the first few months of economic data under his presidency might happen, he should be a walk-in for a second term if he wants to stay on the job regardless of what he does or says on Twitter or any other venue.

The confidence level of American business leaders right now is at a high of 93%, according to NAM President Jay Timmons (who, by the way, was communications director in former Congressman Alex McMillan's office, my boss for 10 years on Capitol Hill, so I can guess you can say we hired well)

Higher levels of confidence in the business community that, under President Trump, excessive regulations will be curtailed; taxes will be cut and government spending will be held in check will lead to more hiring in the job sector.

If there are 12 million more people working in 2020, many of whom have not been able to find a steady well-paying job for the past 8-10 years, who do you think they are going to vote for?

People vote with their pocketbook. And 401(k)s. And their children's education all in mind.

You will wind up knowing more about the real economic growth data than many to most in the media and probably in government as well. 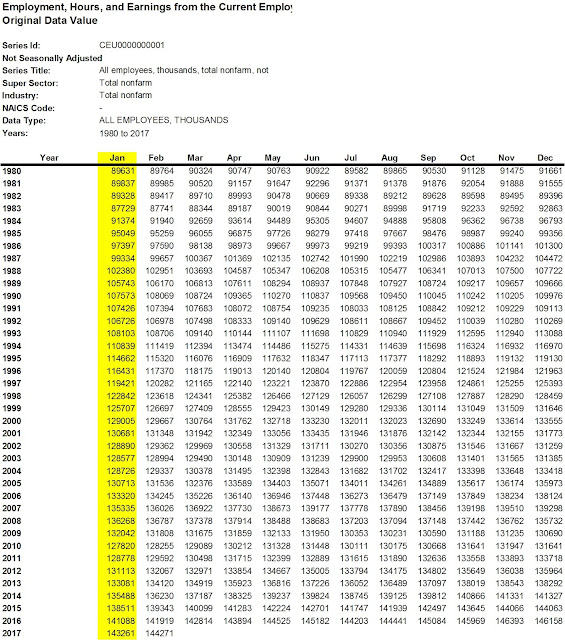