'The Curse of Bigness' 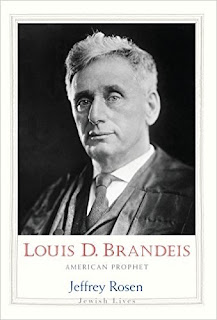 We have been reading a pretty interesting book lately, 'Louis Brandeis: American Prophet' and been struck by many things he wrote in his opinions while on the High Court in Washington, DC but perhaps none more than this:

It is not all that unusual. John Calvin, in many respects, would not understand what many of his Calvinist followers came to proclaim later in his name nor would Martin Luther agree with many doctrines of the Lutheran Church as the centuries rolled along.

Disciples of almost any belief have an interesting human way of distorting and contorting the words of a leader over time into ways and rituals they like and seek to control for future followers to follow.

Supreme Court Justices Sotomayor and Ginsberg wrote glowing accolades of Justice Brandeis for the cover of this book and called him their 'guiding light' for their judicial philosophy and decision-making processes.

There is no doubt that Brandeis would have considered himself a 'progressive' for his time in the late 19th century and early 20th century. Some of his ideas, such as raising the rates of taxation so high on big corporations in order to force them to stay small entities (somehow) might sound like Bernie Sanders on the campaign trail in 2016.

However, the recurring theme of 'American Prophet' is this:


Justice Brandeis' disdain for and distrust of anything 'big' where a concentration of enforced power could be concentrated in a few people's hands and hurt other people with their capricious behavior.

He talks about it over and over and over again. He overturned several programs of FDR's New Deal because he felt they overstepped the constitutional boundaries of executive power in the US Constitution and violated the aversion to concentrated power, especially in government, first put forth by his hero and guiding light, Thomas Jefferson.

He opposed oligopolies in business where wealthy businessmen could manipulate markets to their own benefit first.

He regularly deferred to the states as 'laboratories of democracy' (a phrase with which Brandeis became well-known for) where state and local government leaders closer to the situation had the freedom to experiment with different alternatives to see what worked best without interference from other judges or bureaucrats outside of the state or locality, especially from far-away Washington, DC with all of their inherent federal powers to regulate, tax and direct.

If you have been concerned or disturbed by executive power over-reach of the Obama Administration over the past 8 years and expansion of federal regulatory power, are you comfortable with Hillary Clinton following the same policies and line of attack when it comes to being President?

If you are not concerned or disturbed by executive power over-reach of the Obama Administration over the past 8 years and expansion of federal regulatory power, are you comfortable with Donald Trump following the same policies and line of attack when it comes to being President?

Either way, Justice Brandeis would have probably stepped in to rein in the executive powers of any 3 of these people as President and admonished the US Congress to exercise its constitutional authority and prerogative by withholding funds for any such expansion of executive power as a critical check on any individual gaining too much power in our constitutional form of democratic republican self-governance.

Here's the question to ponder, especially as we head to vote in the next several weeks for President down to school board:

'What is it about our federal government in Washington, DC that many people seem to think will become more altruistic and noble the larger it gets if those same people think BIG BUSINESS, or big churches or big anything are 'bad' in many ways?'

The way Justice Brandeis puts it in many of his opinions, leaders in virtually every institution, government entity, business or private or non-profit charitable organization are subject to the same human emotions and negative traits such as envy, anger, revenge, ego, power, money, accumulation of wealth and status that can be used to hurt other people in seemingly capricious ways, either unintended or, sadly in most cases, well-intended, thought-out and premeditated.

There is no rational reason to believe that people who run for office and want to be our local, state and federal leaders are more 'saintly' than any other human being, although we hope and wish and pray for our elected leaders to be so.

The larger our federal government becomes, the more tools and powers it accumulates with which to use against people who might be in disagreement with the prevailing political party in the White House or in control of Congress.

So why give anyone the keys to an ever-expanding bureaucracy with which THEY get to control more of your life through the law of this country than absolutely necessary if there is any chance of any or all of them turning to the dark side once elected?

It seems as if the limited government concepts put forth so forcefully by Thomas Jefferson at the beginning of the Republic should be some sort of rallying point for people of all political persuasions to start with and continue some reasoned discussions on what to do about many of our nation's problems.

It really doesn't even matter what your political philosophy is. All of us should be vigilant against electing people who can wind up being just as 'bad' as many people think the barons of Wall Street were in the years that led up to Great Crash of 2008 and wiped out trillions of dollars in savings, investments and equity of millions of American families only to see their federal government bail these same barons out with their tax money and federal backstop through the Federal Reserve.

Here are just a few of Justice Brandeis' pithy observations:


Thomas Jefferson was always in the back of Justice Brandeis' mind as he wrote his many opinions. His words still ring true today:


'We have nothing to fear from the demoralizing reasonings of some, if others are left free to demonstrate their errors and especially when the law stands ready to punish the first criminal act produced by the false reasonings; these are safer corrections than the conscience of the judge' 1)

'If there be any among us who wish to dissolve this union or change its republican form, let them stand undisturbed as monuments of the safety with which error of opinion may be tolerated where reason is left free to combat it' 2)

'American Prophet' is a book that might well be worth your time this campaign season. Before you vote, of course.