We have spent a lot of time over the past 8 years bemoaning the lack of 'civil discourse', 'comity' and 'compromise' in our national political life together.

'The Three Big C's' you can call them.

Either we recover them with the current incumbents we have (not likely) or we find great new candidates and leaders from the private sector who finally decide to help save us from ourselves and run for public office up-and-down the line....or we don't and suffer some severe consequences for our collective pig-headedness as a nation.

Those 3 concepts are that important to our democratic republican form of government.

We had an interesting discussion last weekend with someone who said he was 'doing his very best' to politely discuss a very sensitive political issue with someone who is on the other side politically and in philosophy towards life in general but they didn't seem to be getting anywhere.

'I just don't think either one of us is changing the other person's mind!' he lamented.

It occurred to us that his experience might be helpful to us as we head into this final 60 days of the presidential election cycle (thankfully!) and as we head into 2017 with a new President in the White House and probable new numbers in the majority in the US House and Senate, if not outright change of control in the Senate.

'Forget changing his mind' was the first thing that came out. 'Just look for common ground you can agree on and go from there'

Isn't that the essence of what our Founders did at Philadelphia when they wrote the US Constitution in that hot summer of 1787 with a group of Americans who may have had a collective IQ higher than any Congress since, with just 55 delegates who attended at least 1 session and 39 delegates who signed it at the end of that grueling process?

They didn't have to. You never have to change someone's mind 100% to cut some political deal that might not be 100% perfect, but since 'perfection is the enemy of the good', less than perfect is better than no deal at all as we have seen for the past 16 years now.

Somehow, someway the Founders in Philadelphia managed to find a way to come to some common agreement and language that has become the model for constitutions for free nations the world over for the past 229 years without changing anyone's mind 100% at all.

It might make our task far easier if we just accept the cold-hearted fact that we do not have to 'change anyone's mind 100%'  about anything really if we want to get this country and our government back on track to do the things we want Congress and the next President to do for all of us in the public trust.

First of all, it is just too hard to completely change anyone's mind about anything quickly. Over a long period of time, maybe. But in this day of instantaneous news via social media and sideline commentators and activists jumping on every word like it is a fumble in the Super Bowl, it is very, very hard to have even an open and honest debate in public about the issues in a civil adult manner.

We desperately need 'deal-makers' and elected people who are smart enough to recognize 'victory' when they achieve some part of it in any session of Congress; vote to pass it, get it signed by the new President..and then come back the next year to try to get more of their political objectives then.

Any time you are making progress towards your stated political goals while in political office, and not retreating away from them, it is a success in any political science playbook.

Know who embodied that enlightened philosophy towards governing?

He allowed his team to cut more deals than you can imagine with a US Congress that was overwhelmingly controlled all 8 years of his term by Democrats, first led by Speaker Tip O'Neill of Massachusetts and then by Jim Wright of Texas.

So how would this work in a concrete example?


On the federal budget, something big has got to get done in 2017 or else we are really taking a huge gamble on our future prosperity. Far more than we have done over the past 16 years which has been a truly dismal time for any responsible budget observer or participant.

Neither side is going to change the other side's minds 100% on that right now. Or all the thousands of lobbyists with vested interests in protecting the status quo right now just as it is. Mainly because changing it in any way will gore their client or their own ox, as in their contractual employment.

We think whether we raise or lower taxes, it will have about as much effect on solving our future budget deficit problems as pouring a thimbleful of water on a gigantic wildfire out west. As we have shown many, many times by now, regardless of who is in the White House or who controls Congress or whether 'The Moon is in the Seventh House and Jupiter Aligns with Mars', revenues to the federal treasury will be about 18.7% of GDP when all is said and done.

Little more, little less over time depending on the economy at the time.

But what if mature adult leadership spontaneously erupts at both ends of Pennsylvania Avenue in Washington somehow starting January 20, 2017 and both sides see the gaping deficits that are due to go back up dramatically in each of the next 4 years absent any strong action by Congress to control spending and they say this:

Why don't we just forget spending all that time and energy over raising marginal tax rates on the wealthy when we know it just won't get done and won't raise all that much money anyway? They'll just find ways to hide their money in other tax shelters we don't even know about probably.

The chart below shows the impact of just the TOP TEN (10) tax breaks on the US federal budget each and every year. In the year 2014, these 10 tax breaks accounted for over $709 Billion or 50% of ALL of the $1.4 trillion in so-called 'tax expenditures' lost to the federal treasury because they are deductions, exemptions or outright tax credits in the tax code.

$709 billion in non-collected revenue receipts due to these 10 tax breaks is an annual number, not a 10-year estimate. Per. Year.

Assume that all of these 10 most-popular and wide-ranging tax breaks noted above are kept in force in the law and untouched. No need to stir up a hornet's nest and tick off all the businesses who provide health care, homeowners and churches and philanthropists by going anywhere near these top 10 tax breaks.

$709 billion in the rest of the tax expenditures could be freed-up as potential revenue each year which could be the basis for making some pretty important spending reduction deals.

Mainly because the growth of federal health care programs, Medicaid and Medicaid, plus Social Security and Net Interest are going to be the prime components of all the expected increase in federal spending between now and 2024. 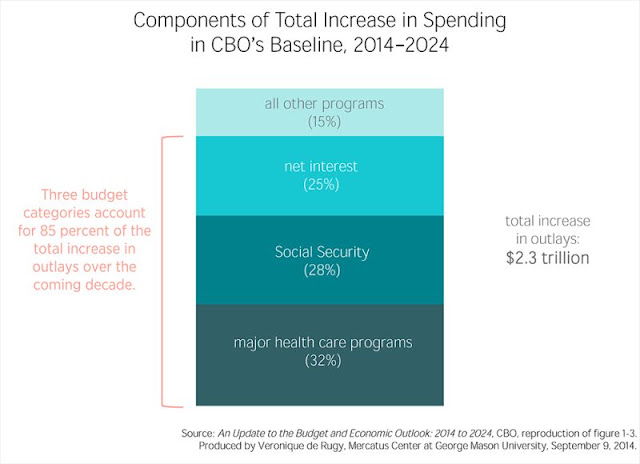 One side would not have to convince the other side to change their mind 100% about 'raising taxes'. Both could agree on the need for 'simplifying the tax code' and 'reducing the number of special tax breaks' that are available only to a relatively select few number of taxpayers each year. Not available to all taxpayers.

The task would be then to come up with enough spending reductions, reforms and eliminations to make the relative 'pain' for the Republicans to support these elimination of tax breaks worth the effort and political risk back in their home district because they may be primaried by someone who would call the elimination of these hundreds of lesser known tax breaks as a 'tax hike'.

If we go many more years without some compromise such as this one on tax breaks, we won't have any additional revenue from higher tax rates coming into the Federal Treasury, that is for sure. But it will be 100% GUARANTEED that we will have a budget deficit that is totally out of control; a national debt approaching $30 trillion and financial and market forces starting to make the hard decisions for us in terms of currency valuation, higher interest rates and the vagaries of inflationary pressures to keep paying the national bills.

History should teach any civilized society that it is far better to keep control of the decisions regarding our financial and fiscal arrangements than to let market forces start to determine them for us. Just look at how Greece and other nations have frittered away their financial independence through irresponsible fiscal management on the part of government leaders.

In the past, Republicans typically used a 3-to-1 spending/revenue increase ratio to determine whether a 'Grand Bargain!' was worth voting for or not.

If 100% of the eliminated tax breaks above were paired 3-to-1 with spending restraint in the out-years, that would be a potential maximum of $2.86 trillion in deficit-reduction annually ($709Bx3=$2.127 + $709B+ $2.86T). The 10-year budget impact would be over $25 trillion in net budget deficit reduction/surplus accumulation when compounded and inflated spending is taken into effect.

Talk about reducing the growth in the size of government spending! At that magnitude of budget restraint, federal spending as a percentage of GDP would soon drop to the 18.7% of GDP level tax revenues have been historically and below which would produce surpluses once again.

Those are enormous numbers when you consider that past budget deals have 'only' reduced federal deficits on the order of $50-$100 billion per year. Not $2.86 trillion per year.

But consider this: Reducing our budget deficits by 'only' $100 billion per year would be only 0.5% of our overall GDP. We have budget deficits approaching 3% of GDP today as is today while we are doing absolutely nothing about it.

We need to find budget compromises of about $250 billion per year in the first couple of years and $500 billion+ from years 5-10 just to balance our budget and not even start to pay of what will soon be a $21 or $22 trillion national debt.

The probable outcome of all this?

The businesses and individuals who lose their tax exemptions and special tax breaks will most likely be wealthy enough to pay expensive tax lawyers and accountants a lot of money to find other ways to shelter their income and minimize their tax liability going forward.

Some marginal increase in revenues will be realized, mostly from 'the rich' so the Democrats can declare victory. If the spending reductions are real, we could actually put a bend point in the projections for our deficit and spending and head back into the world of financial and fiscal sanity once again. Hopefully.

The main thing to remember though is that no one's basic assumptions about political philosophy will have been changed 100% by the other side and they would be allowed to continue their political debates forever as they had done before. Republicans can keep hating higher taxes and Democrats can keep crowing about 'the need for the rich to pay more in taxes!' til kingdom come for all we care.

Perhaps the exercise will convince a majority of Congress and Senate that our current tax system is decrepit and sclerotic and needs to be replaced by a national consumption tax but that is another discussion for later.

If the next Congress and President could come together on such a compromise, and do it very early in the next Administration, they will have done something very, very important for the nation as a whole. Big deals such as this seem to happen about once every 20 years or so in American politics.