The Rorschach Test Of Electing A President 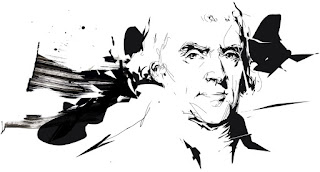 Everyone wants to look at an inkblot of our presidential politics and see a Thomas Jefferson somehow arise out of it.

Or a George Washington. Or an Abraham Lincoln.

Never does anyone want a Millard Fillmore, John Tyler or James Buchanan to somehow emerge out of the muck of a presidential race to lead our great country. (The string of inept Chief Executives from 1837 to 1861 makes you wonder how The United States of America survived the last part of its first century....which it almost didn't)

But we have survived bad presidents before, haven't we?

It is just that things seem to go better when there is someone at the helm of the nation who can: 1) keep our nation safe from harm, both domestic and foreign; and 2) make sure that our economic and fiscal policies are in line with the basic fundamental truths about business, capitalism and the free enterprise system so everyone can pursue their dream of following the American Dream.

Whatever that may be for that particular person.

We have been struck lately by how people, people who are registered to vote and who are most likely to vote that is, have been looking at the current presidential contest and 'projecting' their hopes and dreams onto this candidate or that candidate.

It is no different than when people were 'projecting' their hopes and dreams on a little-known Senator from Illinois, Barack Obama in 2008 and then again in 2012.

People see and hear what they want to hear from their favorite candidate. Somehow, we all can selectively filter out what we don't want to hear from 'our guy' or 'my candidate' all in the 'pursuit of winning at all costs...or else America is doomed!'

Again, just as a reference, The United States of America survived Presidents Millard Fillmore, John Tyler and James Buchanan, didn't we? And President Jimmy Carter for a more modern reference to an almost completely failed presidency. Which we will come back to later.

We were asked to comment on last night's Donald Trump rally in Rock Hill, SC on a local cable news show and after almost 2 hours of watching and talking about Donald Trump, these thoughts became crystal clear:

In 2008, we were about to dive head-first into the deep end of the collateralized debt obligation pool that our Big Banks had created to profit from the no-down payment, no-background check housing boom of the previous decade and our economy was about to go down with it.

President George Bush 43 had led us into a War Against Al Qaeda in Afghanistan after the 9/11 attack on New York and Washington which most people supported. But he then veered into a seemingly interminable war in Iraq to topple Saddam Hussein which many people did not support. Subsequently, voters were looking for a new face with new policies and new slogans to reverse the policies of George Bush 43.

Onto the national stage stepped a young charismatic African-American with a white mother from Chicago who was a gifted orator, Barack Obama. Little experience, had just been elected to the US Senate in 2004 after a not too distinguished career in the Illinois state legislature. Many votes were recorded as 'present' which is not what you want to see or hear from any elected representative. Anyone can vote 'present'.

So in 2006 he decides to run for President of the United States of America preaching a gospel of 'Hope and Change' which is about as vague as anything any candidate is peddling today come to think about it. He promised to pull all of our troops not only out of Afghanistan but Iraq as well regardless of the situation on the ground. Because of his mixed-race heritage, he seemed to be the perfect person to run for President and heal our nation's racial divide from the Oval Office.

When the economy tanked in 2008, people instinctively placed all the blame on the 8 years of President George Bush 43 for all of it crashing down around us and looked for another choice other than old, aged and cranky Senator John McCain who did not 'look like the future' to most people

That 'choice' was Barack Obama. Who came out of nowhere it seemed to defeat Hillary Clinton, who at the time was considered the favorite to win the nomination and the presidency in 2008 much like the University of Kentucky was a 'lock' to win the 2015 NCAA Basketball Championship.

So now it is President Barack Obama who is being judged for the past 7 years of economic and foreign policy decisions and it is not looking too good for him or the American public.

The economy still feels as if it is stuck in mud spinning its wheels trying to find some traction to provide millions of people young and old great new jobs instead of part-time or less than optimal jobs as it has done for the past 7 years.

It feels as if America has lost its leadership in world affairs which stands to reason since President Obama made it a high priority to withdraw from the Middle East as soon as possible and to 'Lead from Behind' which basically means stay out of everything until someone else takes control of the situation which right now seems to be Russia over there.

Into the breach steps Donald Trump preaching how he is going to 'Make America Great Again!'

Not a whole lot of details. Maybe more so than Obama's 'Hope and Change' details (did anyone see the details of Obamacare laid out in the 2008 elections? Didn't think so) but not a lot.

He is gonna 'build a wall and Mexico is gonna pay for it!'. He is going to send Carl Icahn over to China and they are going to stop stealing our trademarks and pirating our technology and send jobs back to the US for our citizens, not theirs.

The true-blue (true-red?) believers in both candidates will hear what they want to hear from both candidates and lock those ideas and principles down in their heads and throw away the key.

Nor did they want to acknowledge that there was no way possible that 'everyone could have health care...and save $2000 per year at the same time!'

Donald Trump supporters are so eager to throw off the yoke of Obama's policies both foreign and domestic that they really don't care what he says about Muslims as long as they think he can help create great jobs for them and their families and friends and keep us safe from Islamist terrorism.

There is selective hearing and reasoning going on in both cases. Donald Trump and Barack Obama are whatever their supporters 'want them to be'. They are like the inkblots in the Rorschach tests where psychologists can show the same inkblot and you think it is a flower and I may think it is an atomic bomb.

So don't be shocked when you see or hear a candidate such as Donald Trump say something outlandish. Other Presidents have gotten elected by saying 'outlandish' things as well. Andrew Jackson and Teddy Roosevelt come to mind first. It is part of their 'charm' or 'aura', at least in the eyes of their supporters.

The narrative surrounding Donald Trump is not unlike the narrative that surrounded and became the aura of Barack Obama except that it is coming from the other side of the political spectrum.

Here's another case of how two inkblots worked off the other:

In 1980, America was drowning in double-digit inflation rates of 12% and interest rates approaching 21%. Oil prices were sky-high; 52 American hostages were taken by the Iranian government under the direction of Ayatollah Khomeni who assumed control after the overthrow of the Shah of Iran; America's role in the world seemed diminished.

And to top it all off, poor old President Jimmy Carter was out fly-fishing one day and a rabid rabbit came swimming towards him in his boat and cameras caught him flailing at the rabid rabbit much like Elmer Fudd attacking Bugs Bunny.

He was done. Ronald Reagan, running as the Anti-Carter, tapped into the anger of the American public who felt threatened and in danger economically and internationally. He was elected by the largest landslide ever against an incumbent president.

Despite the misgivings many had about him being 'just a western cowboy', even though he had served two terms as Governor of California, and maybe pushing the nuclear button at the wrong time, millions of Democrats deserted Jimmy Carter and crossed over to vote for the guy with the cheery disposition and optimistic vision for 'that bright light shining on a hill', The United States of America.

Lofty, somewhat vague narratives with a positive vision for America are Rorschach inkblot tests that work.

Ask Barack Obama. Or Ronald Reagan, if he were still alive.