'Why Doesn't EVERYONE Notice This?'

We have to admit: Watching President Obama's final State of The Union was tough to watch.

Not because it was his last one forever and we were getting all sentimental about his policies while in office.

It was because his view of what has happened over the last 7 years is so diametrically opposed to the actual truth and reality of where we really are in America today.

As time has rolled on and President Obama's plans, proposals, philosophy and policies were laid out in the open, it became readily apparent that he has a very limited understanding of economics, business practices and how jobs are created, sustained and maintained in America. His understanding of federal budget and tax policy is limited to his dreams about his liberal agenda, not whether it actually works to create jobs and stimulate growth and prosperity for everyone.

On foreign policy, he has tried to reverse over 200 years of American defense and foreign policy stature first by apologizing for it in the early stages of his Presidency and later, by retreating from the world stage and withdrawing America from a strong position as the world's remaining superpower.

He doesn't even understand practical politics which, at its pinnacle, requires a Chief Executive in the White House with the dexterity and political acumen to reach across the aisle and build working majorities in both chambers of Capitol Hill.

Even he admitted he was a failure at that crucial task in his SOTU.

At the heart of the Obama Administration, there was a continuous failure to heed the observation about politics by theologian Reinhold Niebuhr when he said:


'Democracy is the process of finding proximate solutions to inherently insoluble problems."

The idea is to get elected....and then try to win as many legislative contests as possible by getting more of your agenda and legislative goals completed and set into law than you give up to the other side.

That is how successful Presidents 'govern' by leading. They set goals and then they compromise to get as much done as humanly possible during a legislative session. And then try, try again.

President Obama got elected in 2008 on his vague and, somewhat vacuous in retrospect, 'Hope and Change' theme and slogan. He and his advisors thought that meant they could change everything in America by legislative fiat. With Congress, as in his first 2 years with solid Democrat majorities in the House and Senate, or without Congress, once it flipped back over to Republican control.

Our Founders, many of whom were young enough that they should be considered 'Founding Youngsters', were smart enough to set up a government to frustrate any Chief Executive who wanted to consolidate power, bypass Congress and 'do it their way' no matter how noble they or their supporters think their agenda may be.

President Obama even has taken the extreme steps of trying to legislate on very big issues via executive orders that bypass Congress totally which has further cemented his isolation from the elected leaders of the People's House, as it has been known in the past.

We deserve better as a nation. We demand and deserve results from our elected leaders that yield positive outcomes for the vast majority of Americans. We deserve elected leaders from both parties who know how to lead but also how to cut deals and compromise.

Just as our Founders did when they wrote the US Constitution in the first place, even though many of them hated each other, namely Jefferson hating Hamilton and vice versa which only intensified after ratification of the Constitution in 1789.

You don't really have to 'like' people from the other side once you are elected to Congress or the state legislature. But it would help. A lot. Add to that some measure of personal respect and appreciation for the democratic republican governance system we have in place and you have the seeds for restoring American government to a workable mechanism once again.

Let's take a peek at some of the 'successes' (sic) President Obama cited in his SOTU speech and compare them with the reality of where we are today in 2016 to see if you, along with designer legend 'Mugatu', have been taking 'crazy pills' for the last 7 years as well: 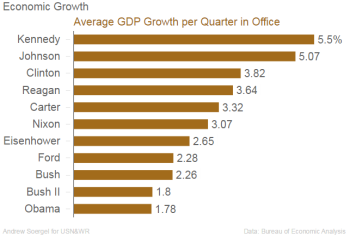 So, as we turn the page on American history here in 2016 and enter into the primaries to select the 2 candidates, one of whom will be our 45th President-Elect after November 8, 2016, ask yourself the same question as 'Mugatu': 'Doesn't everyone notice what has been going on under President Obama's leadership for the past 7 years?'

We can't afford another 8 years of jobless growth, a moribund economy and weakness overseas. Just to name a few problems we face.

If you are a young person under the age of 35, you really have not seen or been a part of an economic boom cycle where it seems everyone who wants to work can find a good-paying job and so can all of their friends.

You deserve to see one. Your 401k and job prospects and earned income are depending on it. So are all the fortunes of your friends and colleagues.