What If It Is Donald Trump Vs. Bernie Sanders for POTUS 2016?

Many people will leave the country. If either one of them wins the White House.

Or at least say they will. Stars such as Alec Baldwin and Kayne West 'promised' to leave this country if George W. Bush 43 was elected, but they didn't.

It is too great of a country to leave. Otherwise we wouldn't have this problem of illegal immigrants who are literally 'dying' to get into the United States of America.

Let's say lightning strikes twice and the Democrats nominate Vermont Socialist Senator Bernie Sanders and the Republicans nominate New York business magnate Donald Trump as their respective nominees to run for President in the November election of 2016 next year.

We still find it hard to believe we can even write those words in a sentence together but let's assume their leads in the various polls holds up for the next year come hell or high water.

For one thing, it should be the most clear decision America has ever made. Bernie Sanders is an avowed out-and-out socialist and he is proud to admit it and campaign on that platform.

Donald Trump is an avowed capitalist who has made it big in American business and world-wide to be honest. Did you know he was 'rich'? He will tell you so if you listen for about 2 minutes to any speech or interview he will give.

There hasn't been that much of a distinction and clear difference of political philosophy among two final candidates for President in America's history that we can recollect.

During his 2008 and 2012 campaigns, President Barack Obama shied away from fully admitting his desire to make America more like the socialized nations of Europe and to diminish the wealth of wealthy Americans by redistributing it by whatever means necessary to all other Americans.

Based on what he has done since being in office, he is not much different from Bernie Sanders truth be told. He just didn't admit it in public for fear of not getting elected.

George W. Bush campaigned as a supporter of freedom and capitalism under the guise of 'compassionate conservatism'. Apparently, since the federal government continued to grow under his watch and budget tools such as PAYGO were jettisoned early in his first administration, while he did cut taxes that Obama later made permanent, President Bush was not as bothered by the specter of Big Government as many conservatives were and are even more so today after 8 years of high-octane BIG GOVERNMENT under President Obama.

There would be no such blurred lines between Bernie and The Donald.

Let's take a look at what this really means for America, especially the young people now in the workforce who have never known a time when the economy boomed along at 4-5%+ growth per year and created millions of jobs to soak up their talents right out of college at good salaries and benefits:

Socialism has been defined as a system of government where 'a political and economic theory of social organization which advocates that the means of production, distribution, and exchange should be owned or regulated by the community as a whole.'

What does that mean in practice really? Don't we already have some form of democratic republicanism in the United States where we have many things that can be considered 'socialist' in nature, especially on the 'regulated by the community' side of things?

The military defense system of this country can be considered 'socialism' under the above definition, can't it? We the People 'Own' and 'Govern' the Military, thank God, don't we? Other countries go through political turmoil and botched elections and some junta or military dictator rises up to stage a coup and then take over the country, usually not for great results for the citizens of that country short or long-term.

We collectively 'own' and 'govern' the interstate highway system, for another example. We own and govern the following through our elected Congress and Senate and President, don't we?:

As our nation has grown and modernized over the years, especially after the creation of the New Deal under FDR to alleviate the crushing blows of the Great Depression in the 1930's, America has progressed from the cowboys of the wild west mentality towards government ('Every man on his own; head 'em up, move 'em on out!') to providing the basic necessities of civilization in the 20th and now the 21st century such as safe working conditions, child labor laws, social safety nets (more on this later) and clean water to drink and clean air to breathe.

We might want to start calling the American System something different than a pure 'capitalist' country from now on. Maybe it should be called 'capitalsocialism' or 'social democratic republicanism' or anything other than 'pure free capitalism'.

Because 'pure capitalism' really does not exist in America today anywhere but the black markets and the drug trade when you really think about it. (although they use our roads to deliver their goods without paying for them through income taxes. They do pay excise taxes on fuel to support road maintenance and construction at least)

The question it seems to us is this: 'To what degree MORE do you want to see America go in terms of adopting more socialist government programs like Europe?'

If you like what President Obama has done, Bernie Sanders is your man to pick up that baton and keep running clockwise to the left for the next 4-8 years. He wants a single-payor national health insurance plan; massive new taxes on the wealthy to redistribute to the common folk; big hikes in the minimum wage, expansive new programs for welfare, environmental protection and public housing....if it involves the federal government, Bernie Sanders is for it.

And he wants to be at the helm of that ship steering it clearly and solidly tacking to the left on every single public policy issue facing America.

The one thing you will never hear from 'President Bernie Sanders'? 'Let's let the free market find the answer'

The problem we have had with people who like government so much is that they take a less than positive view of how the government they want is financed in the first place. Paying for government doesn't come out of thin air, does it? (maybe in the case of the Fed making up currency to expand their balance sheet it does, but that can't last forever, can it?)

A solid government relies on a sound, growing economy where people have the ability to pay taxes to support the government in the first place. No workers, no income; no income, no income tax to pay the government to run the programs you may want to see happen. It is as simple as that.

The one thing you WILL hear from 'President Donald Trump' is the opposite. "Let the free market work!' you'll hear him say.

A lot. Like every day. Like every minute of every day. As long as a microphone is hot and near 'President Trump', you will hear him extol the virtues of private enterprise and capitalism.

'After all, it worked for me!' he seems to always be saying. 'It will work for you! Just let it happen! Trust me!'

We have enough empirical proof to know that pure unadulterated free market capitalism without restraint doesn't always turn out too well. Just take the 2008 Wall Street Meltdown for example. The investment bankers up there took your private money in the banks or other investment vehicles and made wild bets on derivatives and real estate without a whole lot of due diligence and restraint; lost it all and then had the gall to run to Washington to ask you as taxpayers to bail them out to restore their wealth first....oh, and then get the financial system going again.

So we 'get' the need for some government oversight and regulation in many things.

But the operative word there is 'some'. Not 100% in totality. Not federal bureaucrats sticking their nose into every aspect of every person's business every day.

We think 'President Trump' would know how to fling open the doors of free enterprise and capitalism and rejuvenate the now-dormant entrepreneurial spirit that is nascent in millions of Americans who want to create a better life for themselves and their families.

Much of it would be to repeal many of the burdensome laws that have been passed since 2008, under the tail-end of the Bush Administration but accelerated as if on steroids under President Obama for the last 6 years now. Dodd-Frank, executive orders, Obamacare...these are just a few of the big ticket items the next President can push for to free up the private sector to expand and take more risks and, in the process, hire millions of new workers to meet the demand.

We would like to see the next President and Congress do something more to roll back the tide of socialism, even just a little bit. It would even have the added benefit of providing the chance for hundreds of millions of Americans to build up significant retirement nest eggs instead of relying on the paltry, truly minimum wage-level pension they are going to get under the current Social Security system.

Adopt a transition period to private individual retirement accounts funded by your own payroll tax contribution for Social Security.

We have written about this many times before but this approach would take out the 'socialism' part of 'Social Security' at least where every cent of a person's Social Security payment is transferred to them during their retirement years from some working person's payroll taxes at the time. Not from one dime they have contributed to the fictitious 'trust fund' which was named that only to confuse and obfuscate the fact that it really is a socialistic transfer ow wealth from the young to the old.

It would be replaced by a private investment account, just like the one you may have now with your employer or own on your own through an IRA or SEPP retirement investment vehicle. Call it the 'Capital Security System' if you want to distinguish it from your grandpa's old SS check.

But that would be a monumental shift back towards individual responsibility and self-reliance on the part of the American people if they really do want to go back to 'capitalism' and not keep slouching towards European socialism.

It is your choice in varying degrees with any candidate. It would just be so clear between Bernie and The Donald. How much fun would those debates be? 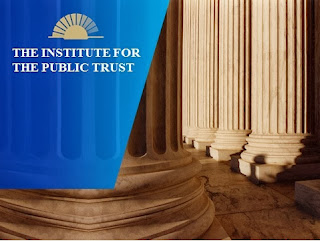