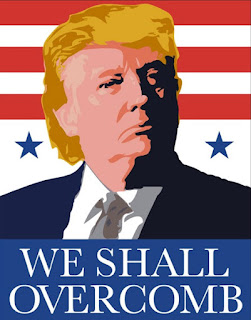 'It just happens' seems to be the best way to explain it.

Donald Trump is confounding the experts in Washington as well as the commentators in the news media and many cognoscenti around the country.

He shouldn't be.  We have seen this lightning strike before.

2008 when Barack Obama was elected President.

Based on his electrifying performance at the 2004 Democratic National Convention where he said: "There's not a black America and white America and Latino America and Asian America; there's the United States of America'*, a little-known-til-then-somewhat-obscure state senator from Chicago, Illinois rode that momentum all the way to the White House 4 years later.

What about other 'phenomenons' who made unlikely campaigns all the way to the White House?

Jimmy Carter rode the wave of discontent and disgust over Watergate and the subsequent Nixon pardon by President Ford and inflation and stagflation that was hitting the country right to the White House from little ole Plains, Georgia in 1976.

Only to be ridden out of town on a rail by Ronald Reagan in 1980, a former B-grade actor who delivered a great speech at the 1964 Republican National Convention in support of soon-to-be-blasted -out-of-the-water presidential candidate Barry Goldwater.

Great speeches still work in the 21st century. You want to make it to the White House; deliver a great speech at a national convention and see what happens.

What about others who rode great marketing and organized campaigns to the White House? Remember the 'Old Rail-Splitter' 'Honest Abe' Lincoln? He was a failed candidate in many ways and viewed as a country hick in many quarters incapable of any intellectual brilliance due to his lack of a college education of much of a schooled education at all.

He may have been the epitome of the story Democrat National Chairman Robert Strauss used to refer to when he said the 'American people want to vote for a man who was born in the log cabin that he built himself'.

We know it can't be true. Yet we still want to believe it so we project that super-human image onto the person running for President we think has the best chance to prove it can be done.

Other 'phenomenons' come and go like the Hale-Bopp Comet. They shine brightly for awhile and then either fade off deep into the universe or they flame out and crash to earth with a thud.

Like Vermont Governor Howard Dean, for a good recent example. He won the Iowa caucuses in 2004 and then gave the most famous state geography lesson in American history but ended it with a weird 'yee-ahh' cowboy yell that ended his presidential aspirations right then and there.

Just like giving a great speech can lead the way to the White House, saying something really stupid can make you an asterisk in the history books in less than a minute.

Or less than 6 seconds. Just ask George Allen of Virginia who was leading all Republican contenders in 2008 until he chose to call someone who was following him for the opposition 'macaca'...and that was all she wrote for 'President' George Allen.

What does any of this have to do with The Donald leading in all the Republican polls right now 6 months out from those Iowa caucuses, the New Hampshire primary, South Carolina primary and now, all of a sudden, the critically important North Carolina primary that will take place on the Super Tuesday Primary, March 1, 2016?

Donald Trump might be riding a wave to the White House just like Barack Obama or Ronald Reagan before him. Or he may say something really stupid and become an asterisk in the history books just like Howard Dean and George Allen before him.

What is going on?

Presidential politics is sort of like a psychological Rorschach test for the entire nation at the same time:

We vote for the one person upon whom we have projected our collective hopes and dreams and cast away our fears in the hope that a majority of people in the states that get this candidate to 270+ electoral votes do the same.

It almost doesn't matter what the 'truth' is about a presidential candidate. Most people had no idea that Barack Obama had such an aggressive progressive socialist agenda coupled with such a recessive foreign policy when they voted for him in 2008 and even again in 2012.

Now we know. So does Israel and the rest of the world in the aftermath of this Iran Deal. If it works, and Iran is docile forever, it will be viewed as a great step forward. If it doesn't, it is a disaster about to happen.

The majority of voters in 2008 and 2012 'projected' their hopes and dreams upon this attractive and eloquent young African-American that he would be able to bring this nation together, not further apart, especially on the race issue; restore the economy to rapid growth and creation of jobs' and keep us safe against the threat of terrorism.

We'll leave it up to you to determine whether you think those 'projections' have been fulfilled.

The same thing is happening with Donald Trump right now for millions of Americans.

Into that breach steps The Donald, Mr. Donald Trump himself.

Political pundits dismissed him as a showman. The Huffington Post said they would not cover his candidacy on the front page but rather on the entertainment page. (Bet they will change soon)

True-blue believers on the Democrat side call him names beyond even what Mr. Trump has been accused of saying towards John McCain and Rosie O'Donnell even.

And still he rides on, now close to 30% in many recent polls.

What is he doing to achieve such heights?

Projection of our collective hopes and dreams. That is what we do when we vote for a President.

Donald Trump may crash and burn to the ground just as Howard Dean and George Allen did before him. There will be others.

As long as Donald Trump is viewed by folks fed up with the excesses of the Obama Administration in terms of their over-reach on taxes, Obamacare, regulations, executive orders, cover-ups, scandals, and now Hillary's emails which are just another extension of the Obama White House, he will continue to garner political support.

His message is simple: Build the wall between Texas and Mexico. Create jobs by the millions. Make America Great Again.

People respond to that brevity and hope.

Don't underestimate him. Remember America likes to elect showmen as well as statesmen. We like to be entertained by our Presidents as much as we want them to lead us to success.

"Now even as we speak, there are those who are preparing to divide us, the spin masters and negative ad peddlers who embrace the politics of anything goes.

"The pundits, the pundits like to slice and dice our country into red states and blue States: red states for Republicans, blue States for Democrats. But I've got news for them, too. We worship an awesome God in the blue states, and we don't like federal agents poking around our libraries in the red states.

"We coach little league in the blue states and, yes, we've got some gay friends in the red states.

"We are one people, all of us pledging allegiance to the stars and stripes, all of us defending the United States of America."