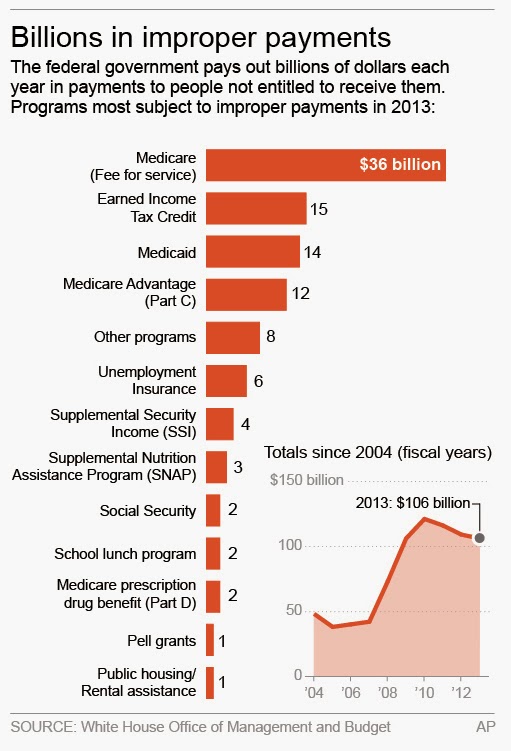 The GAO (General Accounting Office) just came out with a report that ought to curl your hair, boil your grits and infuriate you no end:

'The US Federal Government Made $106 BILLION In Improper Payments in 2013. Alone.

Here's the news report; read it for yourself.

Here's the full actual GAO Report. Read it and weep.

What does this mean exactly?

It means that over the past decade, over $1 TRILLION of your tax dollars have been wasted, spit into the wind, taken from you for no reason other than to waste it.

Know what some of the largest tax increases in history have amounted to?
About $1 trillion over 10 years.

Know what the wars in Iraq and Afghanistan cost over a 10-year period?

The US federal government has just admitted that they have frittered away the monetary equivalent of what the United States of America spent prosecuting the War on Terror in the Middle East for the past 13 years.

Doesn't that just fry your bacon?

If it doesn't, then something is seriously wrong.

Guess what the bad news is? Most of these improper payments last year occurred in the largest federal health care program, Medicare. Guess what program will one day exceed Medicare?

Obamacare. Think that will be run any more efficiently than Medicare?

For one thing, this report points out that many people received incorrect tax credits when they really were not eligible for them. Know what is at the core of Obamacare?

That is right:  Federal subsidy payment credits based on self-reported income.

The chances of Obamacare being run better than Medicare is slim to none. Look at the start of the program itself! You think it is going to all of a sudden become some paradigm of efficiency the longer it stays in effect?

The next time someone advocates raising taxes on anyone, print this GAO report out and give it to them on a silver platter. Highlight the most damning findings in yellow highlighter so they will be absolutely sure to read them.

Then ask them this silly question:

'Why are you supporting higher taxes when all it is going to go towards is more waste, fraud and abuse?'

There is no justification for any tax increase as long as $1 is unaccounted for by the federal government. Not a single solitary reason.

We have to admit: This is one report we just couldn't finish in its entirety by reading it all.

Our grits have just been turned to toast.