How Many Uninsured People Have Signed Up for ObamACAre Anyway?

The President and his Administration, sans the lady who set it all up in the first place, HHS Secretary Kathleen Sebelius, have been proudly touting that '8 Million People Have Signed Up For The ACA!'

We have been reading a lot of things lately to try to discern just precisely how many for the formerly uninsured are now 'insured' under Obamacare...and to be honest, we are having a lot of trouble finding that precise number.

After all, the pretense of introducing and passing a 2400-page monstrous expansion of federal power and virtual takeover of the American health care system in 2010 was to make sure that the 51 million uninsured at the time could find health care insurance on the Obamacare exchanges.

Now, advocates of the ACA 'swore' that it was not a federal takeover of the private health care system. They 'swore' it was just setting up exchanges where private companies would provide private healthcare insurance at lower prices, $2400/year according to President Obama, 'just like the FEHB, The Federal Employee Health Benefits model that the federal government had used for decades'.

We were on the FEHB for 12 years in Washington. It was a pretty good deal. The federal government paid about 85% of our healthcare premium for the privately insured plan we had from BCBS each month; our deductibles were about $100/year and our copays were maybe $10-$15 at the most.

Would that Obamacare be just like the FEHB! We would have signed up for it in a heartbeat as would any other thinking, sentient human being living in America. (Did you know that many dogs and cats have health insurance now? Seriously)

Had the ACA been operating just like the FEHB, we would have saved not $2400 this year but over $10,000 in premiums plus thousands more in out-of-pocket deductibles due to a surgery in the family.

'I knew the FEHB, President Obama. It was a friend of mine. Obamacare, sir, is no FEHB!'

Anyway, after reading a bunch of stuff about the touted 8 million signups for the ACA, here's what we have been able to glean so far:

So, let's just some basic math this morning:

8 million people have signed up for the ACA. 25% are Medicaid-eligible so that means 2 million are on state Medicaid programs 100% paid for by the taxpayer meaning you.

To be generous, 25% of these people have not paid for their coverage. That is 1.5 million right there who are not officially signed up as of today.

So we are now down to 4.5 million new signees to the ACA.

75% of these 4.5 new signees previously had health insurance and were therefore 'covered' and not a part of the 51 million target 'uninsured' population in 2010. There's 3.375 million right there previously insurance people.

That leaves us with a remnant of 1.125 million 'previously uninsured/not eligible for Medicaid' population of citizens that the ACA is actually in force and covering today with private, taxpayer-supported health care insurance.

Out of a total population of 51 million uninsured that the Obama Administration, Speaker Nancy Pelosi and Senator Harry Reid promised 'the ACA had to be passed in order to find out what was in it so all of these people could have access to Affordable Health Insurance!'

It would have been more intellectually and spiritually honest of the proponents just to say: 'We want to expand Medicaid to cover the 2 million Medicaid-eligible population and then come up with some other means to cover these 1.125 million in some other assisted way'.

We would have all come out of this with far less taxpayer money spent and debt built up not to mention the political sturm und drang and angst it has caused this country for the past 4 years. 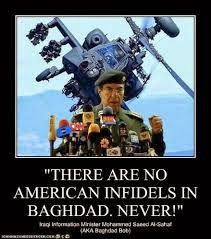 The proponents of the ACA and the spokespeople for the Obama White House can not even tell us with any specificity how many people have 'officially' signed up for ACA and paid for it.

They have as much credibility as the inimitable 'Baghdad Bob', spokesperson for Saddam Hussein when the Allied Forces were invading Iraq in 1990 who insisted that 'Our Supreme Leader Saddam Hussein and his government are not in any danger of being defeated by the American devils!'.

Here's a suggestion: Let PayPal handle all the transactions. Any small business person or on-line purchaser will know within 2 milliseconds if you bank account has been dinged and money withdrawn for the purchase.

At least we would have some real-time information on the biggest legislative action ever taken by an Administration in terms of revamping a huge swath of the American landscape and economy.

Did you know if the American Health Care System were a country and the cost of it were measured as GDP (roughly $2.5 Trillion) it would be the world's 6th-largest nation behind France $2.6 trillion)?

Apparently, the Obama Administration and the Democrat leadership in Congress at the time didn't realize just how big and how massive and how complex the US health care system was at the time of passage of the ACA.