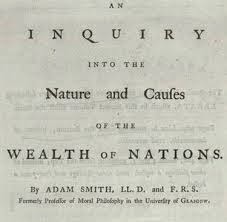 We had lunch recently with a gentleman who has been very successful in the world of business.

He asked us to jump in his pickup truck to go get a sandwich before agreeing to squeeze in the front of our somewhat unkempt sedan whereupon we went about 250 yards down the road to his local restaurant.

'Great food. Not great service' he said. 'They only have one cook and need to hire more servers' he observed in his business-like view. 'But I like the place which I why I keep coming back all the time'.

He knew everyone's name including the server and cashier and as we left, he spotted 2 friends whom he went over to greet and catch up on their lives and families before we left.

We weren't in there more than an hour. But the lessons about business and life we learned in that hour could and should last a lifetime.

Which is why we are bringing them to you today.

There is a narrative, or better yet in modern parlance among the intelligentsia in the media and political circles, 'metanarrative' that goes like this:


'Businessmen (in particular as opposed to businesswomen) are bad. They take what they can steal from the poor and the working man and never give them a raise above the government-mandated minimum wage. They pollute the environment. They ruin the economy. We'd be better off without them so let's have the government run everything!'

Don't you just see and feel these negative vibes and venomous vapors coming off the newspaper editorial pages every day when you read them or out of the mouths of cable news anchors on a repeated loop cycle all day long?

This has been the position to which progressive liberals and populists have always defaulted whether it was true or not. It 'feels' good to have a boogeyman to blame for life's troubles and struggles and an obnoxiously filthy rich businessman smoking stogies after lighting them with $1000 bills is the perfect boogeyman and pinata to hit and hit and hit time and time again.

American businessmen historically have been horrible at telling the story of free enterprise and what is has done to lift hundreds of millions of people out of poverty and lower living standards in America over our history. The lifestyles of the not-so-rich and not-so-famous middle American family are the envy of most of the rest of the world.

The only problem? For the vast part of American history, this metanarrative about the 'big bad old American businessman' simply is not true.

More typical is the case of our friend this past week whose story we are about to tell.

'How did you start your business?' we asked him.

'I was in my freshman year in college in 1957. I married a woman I fell in love with and figured out I needed to bring in some extra income to support us through college. I started a finance business and made loans and collected payments in between going to class and being a husband.

I made plenty of mistakes. More than I care to remember. But eventually I figured my business out and by the time I was a senior in college, I had several operating offices I was running which I then sold before graduation.

After graduation, I found a bankrupt business that I had some interest in so I bought it with the money I made selling my finance company. I made plenty of mistakes in that business as well and didn't really turn it around until several years after buying it. But I eventually got the hang of it and now, 40-some odd years later, we have thousands of stores and other outlets around the country.'

'How many people are working for your company today?'

'Good grief!' we said. 'You are a veritable job-creating, economic engine all by yourself!'

'Not really' was his modest reply. 'We have had hundreds of very good executives and managers along the way. We couldn't have succeeded had we not treated all of our employees as equals and had great products to see along the way.'

So far, we could not see anything wrong with his business success story. Can you?

'What have you done lately?' we went on to ask.

'Well, I decided to get out of the day-to-day operations of this company and I bought 2 small companies from someone I knew. We now have a couple of thousand people working for these 2 companies'.

'So those are no longer just 'small companies' are they?' we said.

We were there to tell him about our efforts to find, recruit and train new and better-educated, experienced and smarter leaders to run for elective office through The Institute for the Public Trust which we have been running now for the past 4 years in the state of North Carolina.

'What bothers you the most in today's business environment?' we asked as a way to explain the importance of our efforts.

'The regulations we have to deal with on a daily basis. We can't just focus on making and selling the best product anymore as we did in the 60's, 70's and even through most of the 80's and early 90's.

We have constant meetings with lawyers and regulatory and compliance officers all day long. I just got out of a meeting which is why I was late to meet you where we were told that due to local occupancy requirements, if we reduced the width of the landscaping beds in front of the building from 7.5 feet wide to 5 feet, we would have to reduce the number of people INSIDE the building from 200 to around 150. All because of the width of the landscaping beds OUTSIDE of the door to the front of our building that WE own!'

Ladies and gentlemen: just how nuts is that? We have been writing about a lot of stuff for a long time now and have been in and out of government for close to 34 years as well and that is about as ridiculous and silly of a regulation as we have ever seen.

The size of a landscaping bed has no bearing on the number of people who can be inside the building working and providing for their families. That is just plain crazy, yes?

'I am not sure we could have built this company if we started today' was his final comment about it all before we paid the server and then he said hello to his friends and then left the restaurant. It is the same comment we have heard time and time again from other successful entrepreneurs of the past.

Think about that for a moment. Here is a guy who started a business all on his own without any help from the government while still in college. He went on to found another business that has been an incredibly success story and has had a hand in creating jobs for perhaps 250,000 to 300,000 people over the course of the lifetime of this company. Even in his post-exec days, he is still creating jobs to the tune of thousands of jobs at the previously small companies he has taken and grown as well.

Shouldn't this guy get the Congressional Medal of Honor or the Nobel Peace Prize or something? This person is a job-creating machine all on his own! Isn't that the sort of thing you would like to see happen again in America?

According to published reports, this man is extremely generous in his business partnerships with people he enters into working arrangements with. His philosophy seems to be: 'The best way for us to be successful is for you to be successful as well!'

For all we know, he has a foundation where he is able to help others meet their needs or achieve their dreams with grants and advice and support. America is built on the success of such people who have the gift of being successful in business.

The Carnegies, the Mellons, the Dukes, the Reynolds, Bill Gates and Warren Buffett all have done remarkable things with their wealth after they made it.  We all benefit from their generosity and largess when we go to the hospitals they have set up or the museums or libraries or hear about them inoculating children around the world to prevent the spread of infectious diseases.

The metanarrative of the 'big, bad old businessman' is in large part not true. Granted, there are business execs and Wall Street bankers who give every business person a bad name and should go to jail when caught and convicted of malfeasance and dereliction of duty.

Given the desultory economic growth and job creation ('job destruction' really since millions of people have left the work force) over the past 5 years and counting, wouldn't you rather see the shackles removed from job creators and business-makers such as this person so they can create new jobs for you and your family?

We do. We have seen it before in the 1980's and the 1990's. When the energy of the American free enterprise spirit is unleashed, it is a thing of beauty to behold.

The sad thing is, President Obama can stand up tomorrow and announce that his policies just aren't working as he had hoped they would and he is going to change his ways to a more pro-growth agenda for the last 2 years of his White House tenure. We are not holding our breath, truth be told.

We just hope our sons and daughters get to experience the wonder of the American free enterprise system sometime. Soon.

Email ThisBlogThis!Share to TwitterShare to FacebookShare to Pinterest
Labels: #jobs