The 'Ward and June Cleaver Economy' Under President Barack Obama

Back in the 1980's, Republicans led by President Ronald Reagan were accused of wanting women to 'stay at home'; 'cook and clean' and 'stay barefoot and pregnant'.

Keep the traditional single income-earning family intact and all that.

Essentially they were accused of being against 'women's rights' because they were against constitutional amendments such as the Equal Rights Amendment to the US Constitution, among other things.

Republicans were accused of wanting to roll back time to the Eisenhower days where men headed households as single wage-earners; went to work every day; brought home the bacon; and had a lovely wife such as June Cleaver at home polishing the furniture every day with Lemon Pledge while wearing pearl necklaces and lovely dresses while raising and tending the children, even mischievous ones such as The Beaver.

Well, one thing is almost for certain under President Barack Obama:

'America has darn near returned to the days of single income-earning families!'

Except this time around in the early 21st century, high numbers of male partners in the household are out-of-work and staying at home while the female partner keeps working to support the family. Regardless, many two income-earning families of the 90's and early 2000's are now reduced to a single income wage earner, if that.

January's jobs report could not have been more dismal or disappointing. Not only for the President, now in his 5th year in the White House but much more so for the millions of families who are still struggling to get out of the chronic under- or un-employed status they have been stuck in for the past 4 years.

Here are some of the 'highlights' (which in truth, are really 'lowlights', no matter how anyone tries to spin then): 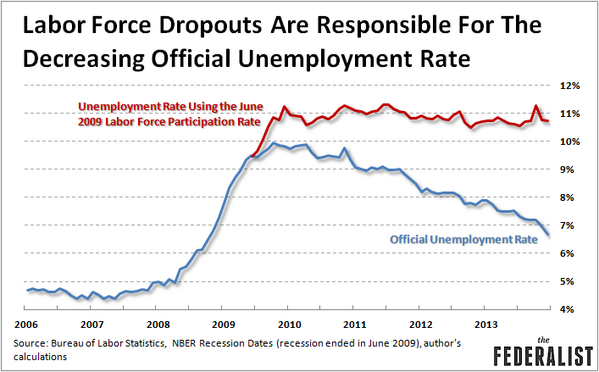 True, the 'official' unemployment rate dropped to 6.7%. But when that number is dropping primarily because more people are leaving the workforce instead of more jobs being added to it, that is not a cause for celebration but one for alarm.

Some will try to argue that the labor participation rate is dropping because of so many Boomers leaving the workforce and some of that might be at work here. However, when many IRAs and 401k plans have been decimated, it is hard to believe that many Boomers can even afford to retire at age 66 nowadays, the official Social Security retirement age today. Many are now forced to work beyond their official retirement age, simply because they can't afford to retire today.  Assuming they are not laid off or can't find work, that is.

No one is cheering this unemployment number today. You can see it on the news channels and on-line in various forums.


Virtually everyone is now acknowledging that this is the most anemic recovery in terms of job creation in modern American history. Typically, one can expect that after a severe economic downturn, such as the ones we experienced in 1980-81; 1987; 1992-93 or 2002-2003, job creation would return with a vengeance in the ensuing recovery. Housing used to lead us out of most of our recessions; it is slowly improving but nowhere near even the replacement rates necessary to keep up with population growth across the nation.

People can always be accused of playing politics with official jobs reports, one way or another. However, now that America has seen unrelenting stagnation in job creation and real economic growth, it is fair to ask yourself:

'Has the economic policy under President Obama 'worked' or not?'

There is absolutely nothing wrong with asking that question, especially if you are out-of-work or significantly unemployed going into the 5th year after the economic collapse of 2008.

After all, you are entitled to evaluate your own self-interest and one of the most important things for everyone in America is whether they have the opportunity to work at a fulfilling job or not.

Creation of millions of new jobs would solve a myriad of problems we now face in America from expansion of Medicaid to the minimum wage to the extension of unemployment benefits.

Our Founding Fathers from Alexander Hamilton to Thomas Jefferson to James Madison all understood that the key to the future success of the United States would be establishing and maintaining the laws, rules and conditions where free enterprise could flourish so citizens could provide for their families.

Nothing wrong with demanding our elected leaders do something policy-wise at the federal and state level to allow these jobs to materialize. By the millions upon millions.