What Is The Most Dangerous 'Pre-Existing Condition' You Can Have That Prevents You From Affordable Health Care Insurance?

16 million individual policy owners are going to lose their health care plans by January 1, 2014. God only knows how many millions more who are now covered by their corporate plan will lose that employer-paid health care when their employers terminate those plans and dump them into the Barack Obama Exchanges.

Chris Conover of the Duke Sanford School of Public Policy and the Fuqua Business School estimates a 'cool' 129 MILLION Americans who now have plans 'they like' will not be able to stay on them in the next several years. (See 'No, David Axelrod!')

All of them, every single one of them, were 'promised' by President Barack Obama that they could 'keep their insurance if they wanted to' repeatedly since 2009 when he took office.

Apparently President Obama doesn't know what the word 'promise' means or where it comes from. It means:


'a declaration made about the future, about some act to be done or not done'. Derivation from the Latin and French words conveying the sense of 'send forth'; 'let go'; 'foretell; and most importantly, 'to give assurance beforehand'.

So. What can you do now, besides shop for plans on the exchanges (which are not lower but much higher in many cases)?
We need a second one.

And/Or.... you can just decide to not buy any health care insurance. At all. Seriously. That is what we have heard a lot of people say they had come to the same conclusion without any help from us.

It is simply a matter of basic math, addition and subtraction really. You can call it something fancy such as 'personalized cost/benefit analysis' or 'risk/reward ratios' but the bottom-line is you are going to do whatever leaves the most amount of money in your pocket and not in the government's wallet or BCBS' bank account, yes?

Here's how it would work if you are in the individual self-insured market:

Finding out you have cancer would certainly qualify as a 'pre-existing condition', wouldn't you think? Just sign up on a new specially designed app on your IPhone on the way to the hospital. You will have then covered yourself in the case of catastrophic bills and saved a ton of money in the interim.

Very few people each year account for the largest percentage of costs in the healthcare system. Many are in their last few months of life for example and have failed to properly execute a living will that would take them off of the respirators when the doctors determine death is imminent and there is no need to keep a patient on (expensive) artificial life support and machines.

So the chances of you actually experiencing a catastrophic event in any given year is very small. Tiny in fact.

If Obamacare has so scrambled the eggs of our current privately-based healthcare system in America that you can not get a reasonably-priced high-deductible HSA any longer, you may want to consider this strategy after consulting with your financial counselors and accountants.

If you pay the $95 or 1% tax penalty, it is almost impossible to see how you will pay less than that for any form of health care offered now on the exchanges or by your current provider if you have a HSA or similar health care insurance plan.

Think about it: You will be starving not only the Obamacare exchanges of money they thought you would pay into their convoluted plan, you will also be starving your current health insurance plan of monthly premiums they were counting on you paying after they jacked up the premiums 2-3 times the current amount.

You get to thumb your nose at both Obamacare AND the Big Bad Insurance Companies, many of which thought Obamacare would be a boon to their business.

You can make it be a 'boom' for both and force everyone to go back to the drawing boards again and 'start over from the beginning'.

There are better ways to fix our healthcare system in America. We can, and have, put men on the moon...and we can't logically and systematically fix the system that is supposed to help keep us healthy?

Your tax penalty (shared responsibility fee) for not having insurance is paid on your taxes at the end of the year. If your taxable income is below 133% of the FPL you are exempt from this tax.

• The penalty is based on modified adjusted gross income.

• The total penalty for the taxable year cannot exceed the national average of the annual premiums of a bronze-level health insurance plan offered through the health insurance marketplaces.

• Children under 18 are assessed at 50% of the minimum penalty.

• The penalty is pro-rated for the number of months you are without health insurance, though there is no penalty for a single gap in coverage of less than 3 months in a year.

• Health insurance plans will provide proof of coverage for their customers so as long as you have health insurance you don't have to worry about the details. 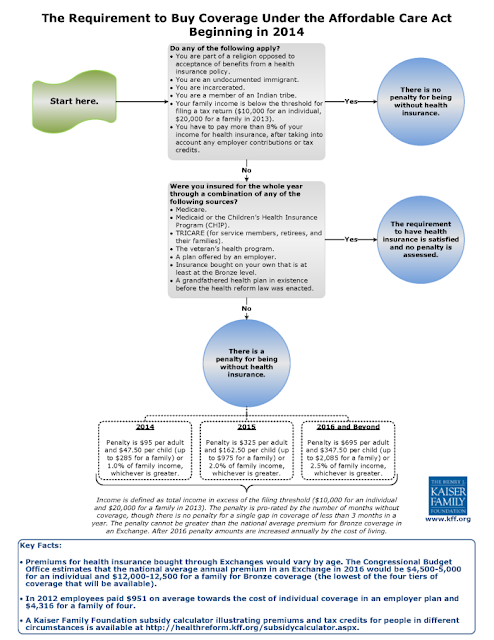