'Victory Has A Hundred Fathers; Defeat Is An Orphan'-JFK 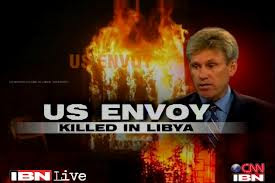 Candy Crowley's unfortunate interruption and incorrect 'correction' of Governor Mitt Romney in the second debate at Hofstra has brought to the fore the question:

'What did President Obama know about the Benghazi attack in Libya; when did he know it and what did he say about it....precisely?'

Just as we have done with most issues over these past 4 years, here is the actual transcript of the President's speech that is now in question that he made in the Rose Garden several hours after everyone found out the US Ambassador had been murdered along with other staff personnel in the US embassy in Benghazi.

Take a look and read it in detail for yourself before listening to any of the chattering heads on TV try to tell you 'what the President said' or 'didn't say'.  We have italicized every word that deals with the word 'attack' and then laid out some thoughts based on other things we have seen like this over the ages in Washington.

The White House
Office of the Press Secretary

For Immediate Release September 12, 2012
Remarks by the President on the Deaths of U.S. Embassy Staff in Libya

THE PRESIDENT:  Good morning.  Every day, all across the world, American diplomats and civilians work tirelessly to advance the interests and values of our nation.  Often, they are away from their families.  Sometimes, they brave great danger.

Yesterday, four of these extraordinary Americans were killed in an attack on our diplomatic post in Benghazi.  Among those killed was our Ambassador, Chris Stevens, as well as Foreign Service Officer Sean Smith.  We are still notifying the families of the others who were killed.  And today, the American people stand united in holding the families of the four Americans in our thoughts and in our prayers.

The United States condemns in the strongest terms this outrageous and shocking attack.  We're working with the government of Libya to secure our diplomats.  I've also directed my administration to increase our security at diplomatic posts around the world.  And make no mistake, we will work with the Libyan government to bring to justice the killers who attacked our people.

Since our founding, the United States has been a nation that respects all faiths.  We reject all efforts to denigrate the religious beliefs of others.  But there is absolutely no justification to this type of senseless violence.  None.  The world must stand together to unequivocally reject these brutal acts.

Already, many Libyans have joined us in doing so, and this attack will not break the bonds between the United States and Libya.  Libyan security personnel fought back against the attackers alongside Americans.  Libyans helped some of our diplomats find safety, and they carried Ambassador Stevens’s body to the hospital, where we tragically learned that he had died.

It's especially tragic that Chris Stevens died in Benghazi because it is a city that he helped to save.  At the height of the Libyan revolution, Chris led our diplomatic post in Benghazi.  With characteristic skill, courage, and resolve, he built partnerships with Libyan revolutionaries, and helped them as they planned to build a new Libya.  When the Qaddafi regime came to an end, Chris was there to serve as our ambassador to the new Libya, and he worked tirelessly to support this young democracy, and I think both Secretary Clinton and I relied deeply on his knowledge of the situation on the ground there.  He was a role model to all who worked with him and to the young diplomats who aspire to walk in his footsteps.

Along with his colleagues, Chris died in a country that is still striving to emerge from the recent experience of war. Today, the loss of these four Americans is fresh, but our memories of them linger on.  I have no doubt that their legacy will live on through the work that they did far from our shores and in the hearts of those who love them back home.

Of course, yesterday was already a painful day for our nation as we marked the solemn memory of the 9/11 attacks. We mourned with the families who were lost on that day.  I visited the graves of troops who made the ultimate sacrifice in Iraq and Afghanistan at the hallowed grounds of Arlington Cemetery, and had the opportunity to say thank you and visit some of our wounded warriors at Walter Reed.  And then last night, we learned the news of this attack in Benghazi.

As Americans, let us never, ever forget that our freedom is only sustained because there are people who are willing to fight for it, to stand up for it, and in some cases, lay down their lives for it.  Our country is only as strong as the character of our people and the service of those both civilian and military who represent us around the globe.

No acts of terror will ever shake the resolve of this great nation, alter that character, or eclipse the light of the values that we stand for.  Today we mourn four more Americans who represent the very best of the United States of America. We will not waver in our commitment to see that justice is done for this terrible act.  And make no mistake, justice will be done.

But we also know that the lives these Americans led stand in stark contrast to those of their attackers.  These four Americans stood up for freedom and human dignity.  They should give every American great pride in the country that they served, and the hope that our flag represents to people around the globe who also yearn to live in freedom and with dignity.

We grieve with their families, but let us carry on their memory, and let us continue their work of seeking a stronger America and a better world for all of our children.

We have always heard in Washington politics, where you stand depends mostly on where you sit.

If you are favorably predisposed to President Obama, you will probably read this with a generous attitude towards him and give him the benefit of the doubt when he concludes by saying in the fourth to the last paragraph: 'No acts of terror will ever shake the resolve of this great nation....'.  This will sound to you as if President Obama is directly equating the attack on the US Embassy with 'terrorist acts', yes?

Is this enough for you?

If you are not favorably predisposed towards President Obama and, in fact, would like to see him defeated in 3 weeks, there are several things that come to mind as you read this statement made just a few hours after hearing of the attack on the embassy in Benghazi:

But here is the real head-scratcher in all this. We have never seen ANYONE go out on the behalf of the President of the United States of America under any Administration; Reagan, Bush 41, Clinton, Bush 43 or Obama up to 9/11/12 and say anything without the full vetting, approval and spin-doctoring by the very highest political/policy people in the White House, including the President on the major issues of the day.

No one. Never.  Not in 22 years in Washington, DC. We never saw any press secretary from any US Senator or US Congressman go out and start blabbing about anything unless it had been specifically vetted and approved by his/her superiors including the elected official.  And if they did, they were fired.  On. The. Spot.

Poor old White House Press Secretary Jay Carney was trotted out every day to try to explain the unexplainable to the Washington press corps about how this was 'a spontaneous attack on the embassy', even though somehow grenade launchers mysteriously appeared out of nowhere unlike most spontaneous riots where rocks are thrown and windows are broken.

United Nations Ambassador Susan Rice was trotted out to every weekend talk show of any note that would have her over that next weekend where she repeatedly carried the company line that 'the unrest in Benghazi was a spillover reaction from the unrest in Egypt that was caused by some obscure video on YouTube that mocked the Prophet Muhammad.'

We haven't seen a high US official so brazenly used to sell a false story since Secretary of State Colin Powell addressed the UN to assert that Saddam Hussein had access to 'weapons of mass destruction' in order to justify the invasion of Iraq in 2003.

The only thing that suffers true 'mass destruction' in cases such as this is the personal integrity and reputation of a public official such as Susan Rice and Colin Powell when they lay both down for the President they serve and paint falsehoods and fantasies in public.

It has now been over a month since the attack on Benghazi and the only person to fully accept blame for this attack has been Secretary of State Hillary Clinton.  President Obama finally said in the second debate, by some sort of transitive property, that 'since she works for me', he will assume responsibility for the 4 deaths in the US Embassy in Benghazi.

Contrast this statement with that of President John F. Kennedy, when asked who was responsible for the failure of the Bay of Pigs invasion of Cuba soon after taking office in April, 1961:

'There's an old saying that victory has a hundred fathers and defeat is an orphan... What matters is only one fact, I am the responsible officer of the government.'

It is one thing to accept the accolades for the successful mission against Osama Bin Laden.  That is easy.

It is a far different thing to accept the blame for mistakes, defeats and deaths that happen on the same watch as Commander-in-Chief.  That is the hard part of the highest and hardest job in the land.

Keep this transcript pf President Obama's printed out and nearby next Monday night when the third and final debate on foreign policy is conducted by Bob Schieffer in Boca Raton, Florida.  There is sure to be tons of argument about who said what when and where and why was this not said then and there.

That is part of American politics.  Except that this issue has already had deadly repercussions and is now a crucial part of the national decision to retain President Barack Obama for another four years or replace him with former Governor Mitt Romney as the next Commander-in-Chief.

We can only hope that the moderator Bob Schieffer is up to the task to steer the debate and keep out of it as a participant and let the nation see President Obama and Governor Romney talk about this critical issue without any interference or distraction.

Unlike the other moderators before him.